All of us genetic genealogists are extremely grateful to Blaine Bettinger for collecting statistics on the actual amounts of DNA shared for known family relationships. He just updated his numbers for that project this past March. Click here for the details on his blog

This update is also included in the wonderful online calculator at DNApainter where you can input either the cM or the percentage shared and dynamically see the probabilities of various relationships. Click here to read what the programmer, Jonny Perl, has explained about its new features on his blog. 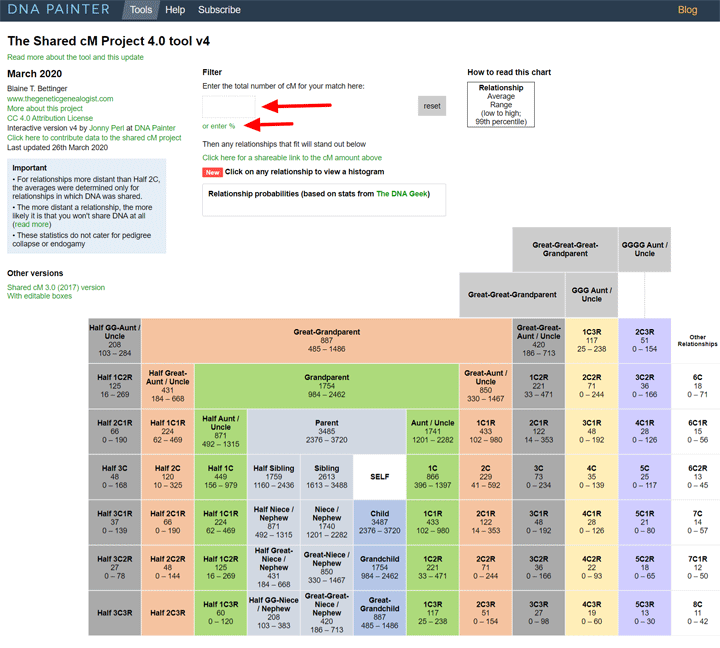 I refer people to this calculator all the time so that they can see the full range of possible relationships for a specific amount of DNA. In the above screen shot of that tool I have used red arrows to show where you would put the number of cM or the % shared.

An exciting new feature is that if you click on any of the colored boxes it shows you a histogram of the frequencies within the range for that relationship.

Let me demonstrate using this calculator by comparing a few of my family members.

END_OF_DOCUMENT_TOKEN_TO_BE_REPLACED

As someone who has worked part-time from her house for some 20 years now, there is not much difference in my routines just because we are self-quarantined. Important for me is structure. Regular times I am in my home office and a time window where I will answer the phone (but I way prefer emails).

The new adventure is ordering grocery deliveries online. Planning many days in advance is best, since store deliveries are backed up. We just got our Costco order made about 5 days ago. So happy! Also you can get weekly deliveries of vegetables from various services. I just got my first vegetable order from Imperfect Foods and they all look fine to me. Slightly different sizes of onions and one broken stalk on a celery bunch but perfecty edible. [UPDATE 25-Mar-2020: my farmfreshtoyou box just came, what gorgeous produce! If you try them, please use my refer a friend code KITT4641 ] 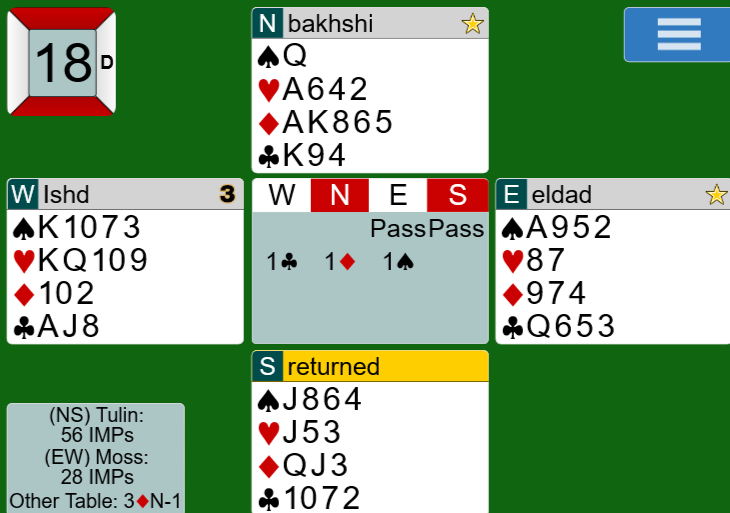 Screenshot from kibbutzing a bridge match online at BridgeBase.com (BBO)

The other thing to get used to is playing bridge online at BridgeBase.com rather than in person at the weekly game at our club.

If you are a Beta tester at Ancestry DNA there is a wonderful new feature to play with where you can link your DNA relatives to your own tree. As soon as more people have that I will blog about it.

By the way I have been posting one flower picture a day from my garden on Instagram and from there to FaceBook.
END_OF_DOCUMENT_TOKEN_TO_BE_REPLACED

Since you are all carefully practicing social distancing in order to do your part to slow this pandemic, I put together some DNA focused reading recommendations. I am very grateful to my kindle app which makes it easy to get books.

My favorite new book about DNA and genealogy is The Lost Family: How DNA Testing is Upending Who We Are

by Libby Copeland which is as suitable for your less addicted family members as it is for you, my fellow seekers. I like the term seeker that Libby uses for those of us who are loving using DNA for solving family mysteries and genealogy puzzles. At the end of this article I have some notes about Libby’s own family discoveries from my interview with her.

Streaming movies is another way to stay in. You might watch the 2011 movie Contagion

again. Click here for the NPR fact checking of it. In summary, except for the speed of a vaccine being developed, it is quite accurate. Thank goodness COVID-19 is not as lethal as the virus in the movie.

Here is more detail about each of the books I recommend.

weaves the Alice Plebuch story though out the entire book, a clever mechanism to keep your interest. It includes the very modern history of genetic genealogy interspersed with many stories of people discovering DNA surprises such as Daddy was not biological. From the cover flap comes this very apt quote: the book explores “what happens when we embark on a vast social experiment with little understanding of the ramifications.” Libby is an excellent writer and story teller. I found her book captivating.

The other books I have read recently about DNA are enjoyable for me, a DNA junkie, but I will not suggest them to my husband. Adam Rutherford’s A Brief History of Everyone Who Ever Lived: The Human Story Retold Through Our Genes

is dense and comprehensive – I have been reading a chapter a week in the bathtub. From Neanderthals to Eugenics it covers a great deal of ground and is both well researched and well written.

More fun, but still mainly for us seekers, is She Has Her Mother’s Laugh: The Powers, Perversions, and Potential of Heredity

. My brother loved this book. It explores the vagaries of genetic inheritance from the eyes of someone becoming a parent.

An oldie but goodie from 1999 is Matt Ridley’s Genome: The Autobiography Of A Species In 23 Chapters (P.S.)

This is the book which reignited my interest in genetics in the early 2000s. He has written many interesting books on this topic, this one was written while the human genome was being sequenced. It has a chapter for each chromosome highlighting a known gene on every one.

If how to respond to a pandemic is on your mind you might enjoy The Great Influenza: The Story of the Deadliest Pandemic in History

. A nice thick book of almost 500 pages it starts with a really good history of modern medicine and continues with how the failings of various leaders let the 1918 Spanish Flu spread dramatically, for example, by not cancelling a parade in Philadelphia,

END_OF_DOCUMENT_TOKEN_TO_BE_REPLACED

Clustering has changed the way many of us work on genealogy mysteries and unknown parentage cases. Genetic Affairs was just one of the sites offering automated clustering (click here for my first clustering post), but then they added tree building. That’s right, they make tree diagrams for each cluster that has at least two people with trees that can be matched up. They even include a GEDcom for those trees in the zip file they send.

One way I use these diagrams is to show cousins how we are related. Another way I use this feature, is to solve unknown parentage cases. I use both DNA2tree and Genetic Affairs and then go with whichever seems to have the more relevant looking trees. The advantage of Genetic Affairs (GA) is that it will look at the unlinked trees and at your ThruLines. Also the output is easy to glance over to see what is worth pursuing, once you are used to the format. Click here for my recent post on automated tree-building tools. 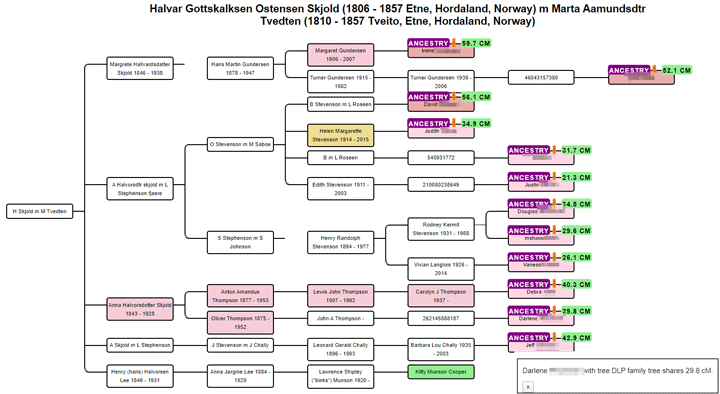 Above is the diagram GA built for the descendants of my gg-grandparents who are in the lonely box on the far left. Click on the image for a larger image in a new tab. My great grandparents lived on farm Skjold in Etne, Hordaland, Norway and had eight children, four of whom, plus the child of another, emigrated to the USA and have many tested descendants at Ancestry.

Here is a key to what you are seeing. The green box on the bottom line is me. The mustard yellow box means that the match’s unlinked tree was used from that person on down. The people in pink in the middle were determined from my ThruLines. Living people are shown as just id numbers, except for your matches who are shown by the name they have chosen to be seen as. All DNA matches are on the far right and are also colored pink with the source and the amount shared listed. Clicking on a match gets a little box to pop up in the lower right corner (as shown) with the name of their family tree, clickable to their Ancestry tree.

The purple box with the word ANCESTRY indicates the source of the tree information. Another GA feature is the ability to cluster both your Family Tree DNA matches and your Ancestry matches together.

When names are listed differently in other trees they will be shown in these diagrams as separate people. Notice that in the second from the left column, that the software could not tell that the A. Skjold who married L. Stephenson is the same person as the A. Halvorsdtr skjold who married L. Stephenson Fjaere. Norwegians did not have fixed surnames so we usually use the farm name as a surname in our trees. Often upon arriving in this country they often chose to use the patronymic, so Stephenson rather than Fjaere (click here for more on Norwegian naming). However the other Anna Halvorsdtr Skjold listed between those two really is a different person and she married a Thompson. Reusing first names is another bane of the Norwegian genealogist.

When “Amy” discovered her brother was only a half brother by doing an Ancestry DNA test, she was very surprised. She had heard that her mother was pregnant with her when marrying her late father, but everyone knew he was her Dad, or so she thought. Her mother was not willing to discuss this, so she asked for my help to figure out her biological father from the DNA.
END_OF_DOCUMENT_TOKEN_TO_BE_REPLACED

Rootstech is a huge, amazing genealogy conference organized by FamilySearch.org that is going on now through Saturday in Salt Lake City. This is the 10th anniversary of the conference that should be on every genealogist’s bucket list. Sadly I am missing it again this year. If you go to one, be sure to leave some time to do research in the best family history library in this country, and perhaps anywhere, just one block from the conference.

If you want more, you can purchase a virtual pass and see the 30 classes that are videotaped at your leisure for a very reasonable price at rootstech.org/salt-lake/virtual-pass

Rootstech wrote a blog post celebrating the history of the conference at rootstech.org/blog/rootstech-then-and-now, but they failed to mention my wonderful brother Shipley Munson who shepherded it from a large conference to the gigantic must-go-to conference it is today. So I will celebrate him here. Thanks for everything Ship! 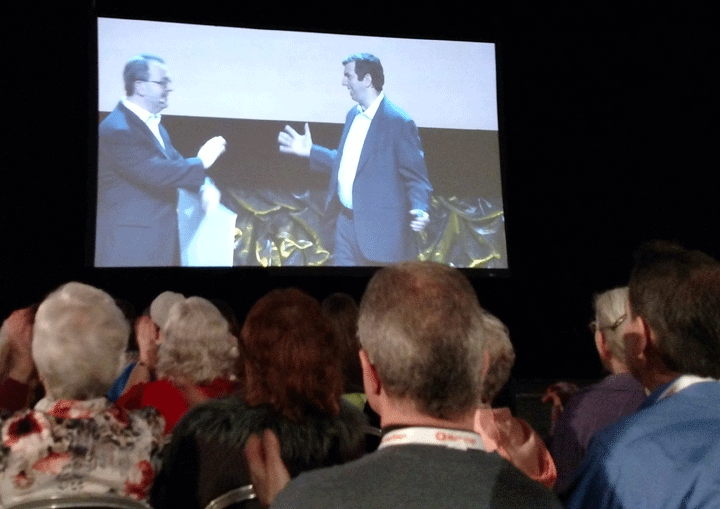 Shipley Munson and A.J.Jacobs on screen at Rootstech 2016

UPDATE 27 Feb 2020: Another way to follow along is to read some of the blog posts Randy Seaver lists here: geneamusings.com/2020/02/rootstech-2020-salt-lake-city-blog.html