Personal DNA test kits are only $69 in the summer sales at three of the major vendors: Ancestry.com

, Family Tree DNA, and MyHeritage. So which one to do? Well that depends on your objectives. If you are testing for the fun of it, then maybe Ancestry with the largest database and automatic tree matching is the one for you. I have lots of details on why to pick one or another in my page of DNA test comparisons.

But beware, if there are any family secrets such as your dad or grandad not being whom you expect or an out of wedlock child, DNA will out them. Recently an amazing story where DNA revealed a surprise was reported in the Washington Post. The tester’s Dad was switched at birth in the hospital!

Another warning is that the science of figuring out where your ancestors are from via DNA is still in its infancy. They really cannot tell the difference very well between German or Scottish ancestry, both can look Scandinavian or English, click here to read my blog post on that topic. They do fine with broad continental predictions. Also some ancestry is very distinctive, so easy to predict, like Finnish or Ashkenazi or Subsaharan African. However Native American may show as East Asian and gypsy might be South Asian.

If your ancestry is from the British Isles you might consider testing at Living DNA currently on sale for $119. This gives a detailed county by county break down in Britain of your ancestry and seems fairly accurate. Plus they are also making a push to get Germans to test.

If your surname is the question, then the Y chromosome tests, also on sale, at Family Tree DNA may be of interest. The tests mentioned above are a sample of all 23 of your chromosomes but of those companies, only Family Tree DNA does the deeper tests on just the Y. Since the Y chromosome is passed almost unchanged from father to son , the tiny mutations on the Y give us a history of the migrations of the human race. Plus the STR markers can give you surname matches in the past few hundred years while the bigY or SNP tests can tell you more about your deeper ancestry

Our family group carrying the Munson Y is descended from some guy in the Indo-European invasion. My curiosity led me to further test the SNPs from my Dad’s Y DNA and discovered that we are R1b-L238 (Y11662) which might mean we were Swedish before we were Norwegian (shocking!). L238 is the Scandinavian branch of those invading R1b warriors with their horses and bronze weapons and Y11662 is the Swedish subgroup (includes some Scots and Norwegians of course) 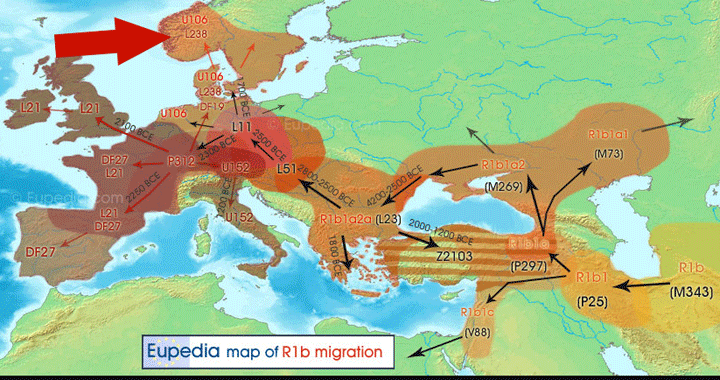 R1b migration map from Eupedia.com with my red arrow added indicating where our L238 ended up

Read more about us European R1bs (aka R-M269) here: http://www.eupedia.com/europe/Haplogroup_R1b_Y-DNA.shtml

One of the advantages of testing at 23andMe is that it will give you your basic haplogroup predictions, both Y and the mother’s mother’s mother line, mitochondrial DNA. These reach thousands of years back in time and are fun to know about.

Once you have tested at any of these companies, you can upload the results to many other web sites for more information and different ancestry predictions, as well as finding other cousins. So if you have not tested your DNA yet, what are you waiting for? These sales are a good value.

One thought on “Summer Sales on DNA kits”