The randomness of DNA inheritance always amazes me. My Norwegian-American father seems to have inherited more DNA from his Skjold grandad, “Dada,” than his Wold grandma, “Mormor.” Dad shares more than the expected amount of DNA with 3rd and 4th and double 4th cousins on his Skjold line. Of course this could also be explained by the slight endogamy in the area they come from, Etne, Hordaland. By comparison, Dad shares no DNA with a Wold 3rd cousin once removed and only a small amount with her mother. He shares more with a few other Wold cousins but it tends to be less than the expected amount with the more distant cousins on that line.

, a 3rd cousin match appeared for my brother which turned out to be a real 3rd cousin, a Gundersen relative who is descended from Dada’s sister Margareta. Her son who immigrated to Brooklyn, Hans Martin Gundersen, is pictured on the left.

On 23andme.com, I found a new 3rd-4th cousin on Dad’s list, who was found to be from another branch of our Holland relatives. The Hollands descend from Dada’s Aunt Mette (see my post with her portrait). My father’s newly found 3rd cousin twice removed shares 1.10% of her DNA with him: 4 segments totaling 84cM. This is on the high side, more like a second cousin once removed (click here for the article at ISOGG about the expected amounts of shared DNA).

So read on for the details of how I figured out the actual relationships with my new cousins.

Maria, Dad’s new match on 23andme was quick to share genomes and send me the phone number of her mother Kristine, the keeper of the family history. 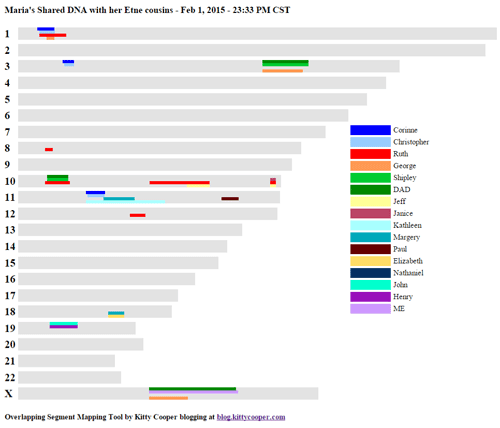 When I compared Maria’s DNA to my Dad, me, my brother, and my two 2nd cousins I saw that she matched my 2nd cousin related on the Wold/Skjold line. The actual DNA segments included one that was a known Skjold segment, so I quickly compared her to my many Etne cousins and saw she had more matching DNA with the Holland descendant from my Dad’s generation than with anyone else (100cM).

Next I called Kristine and asked if she had any Hollands on her tree; she told me that her great grandfather was Christian Holland, one of seven brothers, which placed the relationship, since Christian was one of Mette’s seven sons. Familysearch.org had all the details on this family branch which I quickly copied to GENI. This means that Kristine and I are 4th cousins while Dad is a 3rd cousin twice removed to her daughter, Maria, the tester with whom he shares so much DNA.

The diagram above, made with my segment mapper (click for the full sized version with mouse-overs), shows all of Maria’s overlaps with the rest of the Etne descended cousins. George and Henry are my first cousins; John is a second cousin. Janice, Corinne, Christopher(4th1R), Jeff, Paul, Kathleen, and Ruth (3rd1R) are all Holland descendants and all my 4th cousins except where noted; therefore they are all Maria’s 3rd cousins once removed except Ruth (2nd1R) and Christopher (4th). Margery, Elizabeth, and Nathaniel are three different generations from the triply related double 4th cousin Etne group (see my four generations of Etne cousins post).

did not figure out the relationship to Irene, my newly found Gundersen cousin. I actually looked at her tree and followed the Norwegian line which ended with Hans Martin Gundersen. A story on his page said “Hans worked for his uncle’s Tug Boat Company as a captain in the New York Harbor. Hans’ Uncle Henry Lee was a sponsor for him when he became an American Citizen. “ and had his arrival date as Oct 3, 1902. Eureka! Henry Lee is the name my great-grandfather Dada used in this country and he owned a tugboat and some harbor businesses.

My next task was to figure out whose son Hans Martin Gundersen was, since Dada had eight siblings. None of them were named Gunder, so most likely Hans Martin was the son of one of Dada’s sisters. So I searched for the first name Hans Martin born in 1877 in Hordaland over at the online Norwegian archives. Why just the first name? Because Norwegian surnames can either be the farm name or patronymic as in Gundersen (son of Gunder).

I found his emigration record via this technique, which listed his farm name as Indbjo in Fjellberg:
http://digitalarkivet.arkivverket.no/en-gb/gen/vis/8/pe00000000703123
This found the likely connection since Dada’s sister Margreta is listed in the Skjold farm book as moving to farm Innbjoa in Olen (which is in Fjellberg):

Not every record is in the archive yet, perhaps explaining why I did not find his birth record. But I went over to the tree at familysearch.org and sure enough found him with his parents. I will check more records and the farm book with Innbjoa when I am in Salt Lake City for Rootstech to confirm this relationship. But I am confident that this is where he fits in.

Cousin Irene gave me editor access to her tree so I could copy over our shared family which I did. Within 24 hours, the ancestry DNA page showed the relationship. 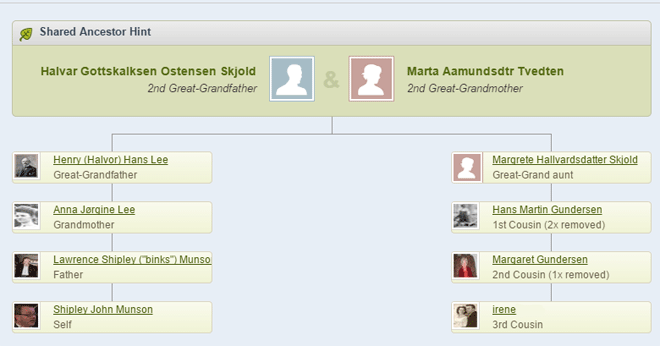 Now to convince our new cousins, Irene and Maria, to upload their data to GEDmatch.com so I can compare them to each other!