Congratulations to WIKItree for getting sources added to more than 22,000 profiles. Read the wrap up here – http://www.wikitree.com/blog/sourceathon-2016-wrapup/ … No thanks to me though, as I got tangled up in my first one before finally moving on to do a few more.

The WIKItree source-a-thon was really fun. I loved checking in to the hangouts (although I was not really there just at Utube and often after the fact) and hearing about how well all those other teams were doing, hundreds of profiles sourced. How wonderful! Never anything for team Europe, my team. Perhaps our sourcing is just harder or it was that we had no captain reporting in. In three hours I managed to source four people! 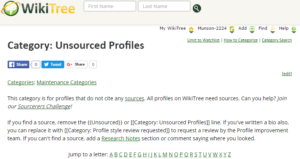 Maybe the first one I picked was just too difficult. So here is my sourcing experience.

I went to the unsourced profiles page and clicked on Europe. Within Europe I clicked on Norway since I figured my expertise with the Norwegian online archives plus all the copied farmbook pages I have on hand would help. None of my farms were listed on either page of 200 names except for one in the 1500s, too long ago. So I chose a person with a surname (usually a farm name) that a cousin of mine married into, Foss, which is actually a pretty common name in Norway.

The fellow I picked, Martin Foss, had no birth or death dates, and no profile manager but he did have parents and a daughter Olga. By looking at his parents I had a location, Tromsø and their birth years. Next I searched the online Norwegian digital archives for each parent using the advanced search for people. Normally I use just the first name and birth year when I know the location. However with a name like Ole Olsen it seemed better to try Ole Foss with a location of all of Troms. I found him and his family, shown below, with a lot of children listed in the 1875 census but no Martin or any similar name. Perhaps he was older and had already left home? 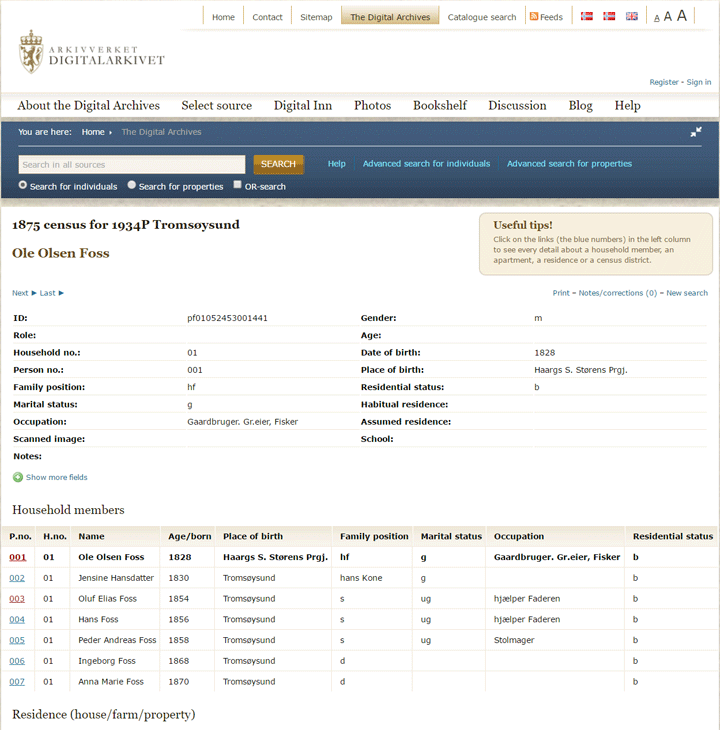 Now that I had the location, Tromsøysund, I could search for anyone named Martin born in that parish in the late 1800s. Not there. Well not every record is digitized. Spot checking some of his siblings should tell me if those records had been indexed. Nope they were not, just the census. Okay that means that I have to go through the churchbooks to find the marriage and subsequent births of each child. Put that aside to do another day.

Next I went to Ancestry.com

and found Martin as Olga’s father in the tree he looked to have been copied from. This had birth and death dates for him but when I plugged those into WIKItree, it complained he was born after his daughter Olga. Oops. Wrong Martin? Wrong family for Olga? Left a comment on the ancestry tree.

Searching that Martin Foss with these dates at ancestry turned up his find a grave record in Spokane. Then a search for that Martin Foss at familysearch found several Spokane census records with his wife Bertha and son Melvin but no Olga. Added those people to WIKItree, disconnected Martin from the incorrect daughter Olga as well as parents Ole Olsen and Jensine Foss. Made notations in the biography section for Olga and Martin about all this in case there was some relationship to the facts that I just did not find. Looks like this was all from a poorly researched ancestry tree … perhaps someone just clicked green leaves without doing much verification and then that tree was uploaded to WIKItree.

Next I looked for Olga Foss. At WIKItree she was listed as the wife Charles Bailey Baldwin born between 1880 and 1885 in America. Looked at familysearch – hundreds of results – there were at least three good candidates for this Olga. Who knew this was such a common name?

Already two hours had gone by and this family was still a mess although some sources had been added as well as all those children for Ole Olsen and Jensine Foss. By the way Ole and Jensine were living with son Peder in the 1895 Minnesota census.

Time to find some easy Norwegians to source. So I picked a few born in the 1800s and between the digital archives http://digitalarkivet.arkivverket.no/ and familysearch.org I was able to get three sourced before it was my bedtime. Two of them turned out to be born in the USA, not in Norway after all; the 1900 US census is very useful in that it shows birth locales for a person and their parents.

My trick with the Norwegian archives is to look for just the first name with birth year and locality selected, since surnames can vary so widely. Another trick is that once I find the farm, I use the advanced search for properties to find it in other censuses. Click here for my blog post with more tricks. http://blog.kittycooper.com/2014/02/searching-the-norwegian-digital-archives-a-rootstech-talk/

Much later in the week I found the report for team Europe. Glad other people did more sourcing than I did! So I will add a link to this blog post there.

6 thoughts on “Slow Sourcing, better than no sourcing”