After a day or two I sent a message to A. This is roughly what I sent.

Hi A,
I see that you have a second cousin match with my cousin. Apparently this would be on the Goodsell line because of the others you match. I know nothing about the Goodsells since they are not my relatives.
I have been slowly filling in my cousin’s tree, see anything familiar?
I blog about genetic genealogy and have written many helpful tools. Let me know if I can assist you
Kitty

A week later she replied. She gave me two of her grandparent names which she told me were on a cousin’s public tree at ancestry. She also included her email address. 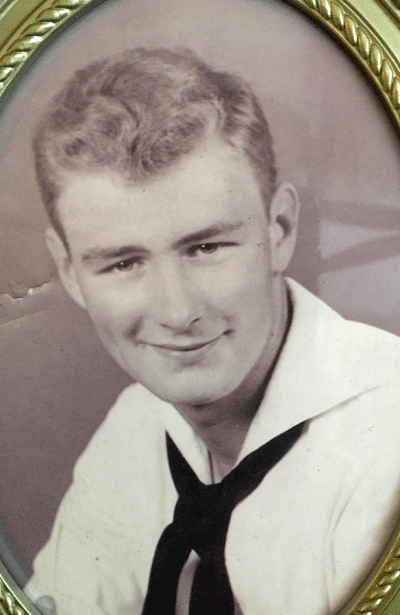 I searched and found her cousin’s tree. Those two grandparents were clearly not a match for MM so I sent A an email asking if she knew her other two grandparents names. She sent those names and told me that this other grandmother was Irish so I eliminated her. That left her grandad Gordon Johnson whom she sent the picture of shown here. With a common name like that I did not expect much success. After a quick and fruitless look, I put this one away on my “to do someday” list. That was at the end of June.

Over the summer whenever I had a little free time, I did more work on MM’s tree, building it forward from her grandad, my relative. MM has a big book with photos and family sheets which I had taken pictures of when I visited her last spring, ancestry kit in hand. Our mutual cousin Ed had been there too and had given me his part of the tree. So I continued to enter their data, using censuses and those green leaves at ancestry to fill more in. MM’s grandad had 26 children so there are a lot of people in her tree.

One fine September day I got an email from a Wold related 4th cousin asking if the new Wold test she was seeing was one of ours. So I opened MM’s results and found that another Wold cousin had tested at AncestryDNA

, with the same name as my known 3rd cousin (MM’s 2nd once removed) . Sure enough, MM showed a 3rd cousin level match with him. I sent his son a note asking if that was really his Dad and eventually found out that yes it was.

Time to check MM’s test for the common matches with our newly tested Wold cousin. Surprise! A is a shared match with him! Having both Wold and Goodsell matches, it would now seem that A is descended from Charley and Martha, most likely via one of MM’s aunts and thus is my relative too. Perhaps A is not MM’s second cousin after all, but a first cousin twice removed. This would be the case if A’s grandfather Gordon Johnson is MM’s first cousin. That relationship would share about the same amount of DNA as a second cousin. (Use the chart at ISOGG to determine other likely relationships from the amount of shared DNA – http://www.isogg.org/wiki/Autosomal_DNA_statistics)

A scan of the seven siblings of MM’s dad showed that one sister did marry a Johnson and had a son named Gordon! How did I not remember about A when I entered that data? Maybe it was a late night green leaf click or more likely I was just not expecting him on that part of the tree … Now I cross checked the facts that I had from A with MM’s tree and did some research at ancestry to be sure. A had mentioned that her grandfather had died when her mom was 12 and he was on active duty in the Navy.

I found the horrifying death certificate, partially shown below, which confirmed his parents, his Navy career, and his early demise. He died of an accident when only 40 years old. He fell into a vat of alumina and suffocated. Click here for his find a grave memorial.

By now it was two in the morning. I get excited by new genealogy discoveries! I sent A an email, copying MM, welcoming A to the family with links to the Wold family history and my blog post about my trip to the ruins of the family home in Norway.

Even though it had been a few months, A wrote back right away the next morning. MM and I are very happy to be in touch with her and to tell her more about her grandad’s family.

This is a lesson for me to never ignore a close family match! And to be careful about making assumptions from those shared ancestry matches when not that many of your relatives are tested there.

11 thoughts on “An elusive 2nd cousin match at Ancestry DNA”