does a great job of finding common ancestors between DNA matches when both parties have trees. The layout is easy to navigate, intuitive, and well integrated, but sometimes the WRONG person or couple is shown as providing the shared DNA. This problem can occur when you share multiple common ancestors with a match but you or your match have have not yet found all of them.

Let’s look at an example of this.

In September 2016, I received a new match at AncestryDNA

– B41. Based on a comparison of B41’s tree and my tree, Ancestry provided a “Shared Ancestor Hint” indicating that Barnabas Pratt was our common ancestor and that we were 5th cousins three times removed (5C3R) as shown below.

Note that Ancestry’s “Shared Ancestor Hint” in the above image indicates that B41 and I match through my paternal side.

Because B41 is a “distant cousin” (predicted as a 5th to 8th cousin), Ancestry doesn’t provide “Shared Matches” as shown by Figure 2. Who knows if we do or don’t have Shared matches.

Figure 2: Shared Matches and Shared cM/Segments with B41

I was very excited to have B41 as a match via Barnabas Pratt because it would help me verify that particular branch which is connected to my Mayflower line. I hoped to get B41 over to GEDmatch and use him to separate some of my Mayflower matches from other lines, like the Pratt line, that were married into my Mayflower (Sprague to Warren) line.

After a short discussion with B41, he uploaded to GEDMatch and that is when things got interesting! 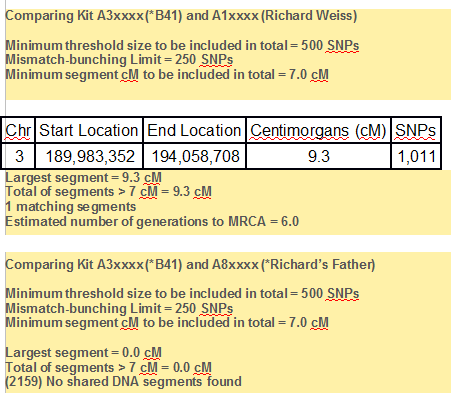 I ran the One-to-One tool at GEDmatch. This is the key tool to compare DNA between two people.

B41 and I matched but when I ran One-to-One between B41 and my father’s kit at GEDmatch, they did not match as expected.

Houston, we have a problem! Barnabas Pratt is on my paternal tree!

I started comparing B41 to my immediate maternal family at GEDmatch, to see if I matched on that side. B41 did not match my maternal half siblings; but he did match our maternal aunt, see Figure 4. 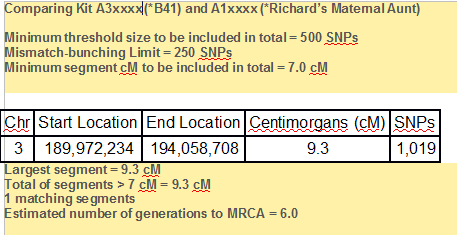 Figure 4: One-to-One between B41 and Richard’s Maternal Aunt

Follow On:
B41, my aunt, and I got the same bit of DNA from someone other than Barnabas Pratt or his wife – and we have no idea from whom other than it is an ancestor on my maternal side. A check of my mother’s and aunt’s AncestryDNA

match lists for B41, now that I know to look, shows that B41 is not listed in either my mother’s or my aunt’s match list at AncestryDNA.
GEDmatch to the rescue again. GEDMatch can help where Ancestry’s choice not to provide Shared Matches beyond 4th cousins fails us.
Next, I ran the “People who match both kits” tool at GEDmatch. I ran it against both B41 & me and B41 & my aunt. B41 and I now have a list of folks to work with to help narrow down where to look in our trees or at least isolate our shared segment to specific branches in our respective trees. The search continues but now as a community!

Summary:
What you have just seen is the problem with AncestryDNA’s approach of 1) not giving us a chromosome browser and 2) not listing “Shared Matches” beyond 4th cousins.
Without both of those tools, we can’t confirm that a match is associated with the predicted common ancestor (a chromosome browser required to do that) and we don’t have other in-common-with matches to work with to figure out who the actual common ancestor is (need to see shared matches beyond 4th cousin to do that). Not having either tool at Ancestry is challenging. Not having both tools not only is disabling but perpetuates false perspectives and “bad science.” It also makes it hard for us to meet the Genealogical Proof Standards. It’s like having to rely on Family Lore all over again.
GEDmatch enables us do the validation and research but the problem is that not all AncestryDNA testers have transferred to GEDmatch – so we are limited.

Recommendation:
Work with your matches to validate every one of Ancestry’s “Shared Ancestor Hints” at GEDMatch.

choices to 1) not provide a chromosome browser and 2) not provide “shared matches” (aka ICW matches) beyond 4th cousins can and often does result in incorrect common ancestor attribution between matches. Ancestry’s

choices to not provide these critical tools perpetuates the “bad science” – the very problem that Ancestry has stated that they are trying to avoid. Ancestry’s approach results in a new version of unsupported “Family Lore.”

As a result, Ancestry’s

“Shared Ancestor Hints” cannot be used to accurately confirm an ancestor, much less be used as a Genealogical Proof Standards (GPS) which should be the goal of all genealogists and family historians.

Don’t get me wrong, I am a big fan of much of what Ancestry

does and how they do it. The way they have trees integrated with DNA and the ease of use of trees far surpasses any other company. But in the area of being able to prove a “Shared Ancestor Hint” really is the connection between matches, Ancestry falls far short of the requirements of the genetic genealogy community, the needs of family historians, and the capabilities of their competitors. They have given us a new version of “Family Lore.”
(I won’t get into “bad trees” because that is the individual’s responsibility and not Ancestry’s IMO.)

NOTE: This is just one of several examples. I have not explored all 234 of my “Shared Ancestor Hints” to this level of detail.

Thank you Richard for this interesting guest blog post.

Richard Weiss is member of the DNAadoption team. He assists with all DNAadoption classes as well as supports development of and updates to the DNA prediction chart, “How To’s”, class materials, and refining DNA search methods – in addition to being a search angel.
http://www.dnaadoption.com/index.php?page=about-us

16 thoughts on “When an Ancestry DNA green leaf is wrong”