The Lakeside Historic Society Christmas Home Tour was today, Saturday, from 10 am to 2 pm and our home was part of it. You would have seen my garden plus a peek at the house via my sun porch. 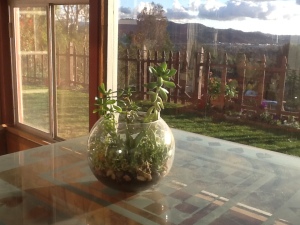 View from the sun porch

​Bert and Marie Wilkas designed the house and hired a builder to draw up the plans and start construction in 1957. It was completed in 1958. The original address was Route 1, Box 317. ​It is a one story wood home in the style known as san diego modern in the 50s – extensive use of natural materials, wood, and large glass windows (actually french doors) on the view side.

The rest of this post is a the detailed description of my garden and I am still adding photos.
No pesticides are used in this organic garden nor have been since it was built in 1957/8. One slight exception is occasional mild poison used for the gophers down their holes.

You may see some wild turkeys and wild chickens (red junglefowl) wandering about. They are the local insect control squad and supply much natural fertilizer. 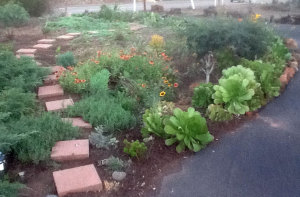 The front circle was originally grass and shrubs: juniper, pyracantha and a purple hop bush hedge.

Kitty removed the grass and those shrubs which were dead and replaced them with low water use plants: red bougainvillea, succulents and drought tolerant wildflowers from seed.

The succulents feature an edging of a large green aeonium (Aeonium canariense –   created from one plant!). The very dark colored aeoniums are aeonium arboreum ‘Zwartkop’ and the aeonium with little yellow streaked leaves are aeonium ‘sunburst.’ Notice the jellybean sedum (Sedum rubrotinctum) with small round leaves, some are bright red! Various other sedums are round the pathway plus a few blue chalk fingers (Senecio vitalis ‘Serpents’). Larger succulents in the center are various aloes and yuccas which will fill in more in future years. 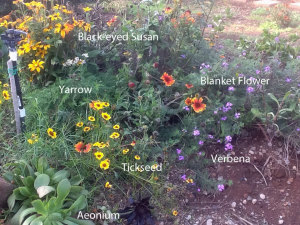 Cactus Garden – front and downhill to the left 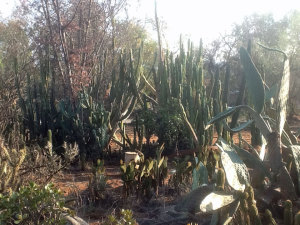 The cactus garden was planted in the late 1960s so is more than 50 years old. Watch out for the buckhorn cholla (Opuntia acanthocarpa) as it spines are quite nasty. It is the sprawling thorny shrub in front with light green new growth. There are also several types of padded opuntias (prickly pear) and a few yuccas.
The tallest cactus in back is a peruvian apple cactus (Cereus repandus). It has an exquisite large flower which opens for one night only and is followed by a bright red apple-like fruit that is quite tasty.  Another tall plant is the Euphorbia perhaps an avasmontana. Another large plant is the more classic looking cactus which appears to be a variety of organ pipe cactus (stenocereus thurberi), well north of its normal location (south facing slope helps).
There is a meditation stump to sit on and an old rusted wagon wheel.

Fruit Trees – front and to the right

The 50 or 60 foot tree to the right front of the house is a mission fig tree that was planted in the late 1960s. It has two crops, a small one with larger figs in late May /early June and a very abundant crop in August that inspired the Coopers to get a dehydrator. Kitty hopes she has dried enough figs to last her until next June.
The small clementine tangerine tree at the front right of the house, planted about the same time as the fig, usually bears fruit for Christmas. 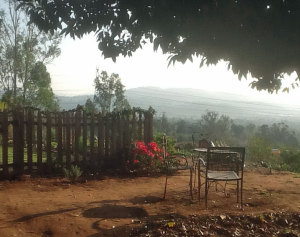 The lemon tree by the driveway bears fruit year round, help yourself! It is an old fashioned Eureka lemon and is about 20 years old.
There are two Fuerte avocado trees to the right of the house planted in 1958. Normally they have fruit from November to June but this year they lost most of their fruit in the June heat so they are blooming again now, The leaves are browned on the edges from the watering restrictions. In the same grove with the avocados are a valencia orange, a magnolia tree, and a tangerine with very sweet, easily pealed and segmented fruit, variety unknown. They are just starting to be ready,
New trees planted these last two years include 2 apples (pink lady and anna), an apricot, a nectarine, a donut peach, and a white grapevine. Most on the new terracing down the hill from the avocados. 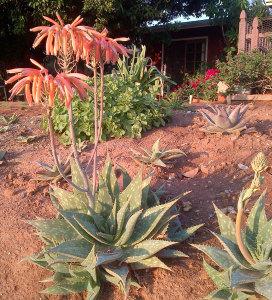 The back hillside area was all weedy grass with sea lavender / perennial statice (Limonium perezii), ivy geranium (pelargonium peltatum), and the prickly pear cactus towards the bottom. Plus there were some shrubs making a hedge to hide the house below. Of the old hedge, only the bottle brush shrubs (Callistemon citrinus) survived the new low water use regime. A california lilac (ceanothus) was added plus a few salvias and russian sage.

The hillside was terraced and a grayish aloe with a pale orange flower (aloe maculata, currently in bloom) used to hold the soil. An iris section was introduced and many other succulents including the classic iceplant which makes the San Diego hills pink in the spring. This area is on the new automatic irrigation system but is low water use although it gets some extra from being on the leach lines.

Back Fenced in Area 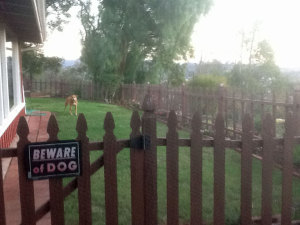 One section of grass was kept for a fenced in dog run. A picket fence with chicken wire was added to keep out the chickens and the rabbits. Then planting areas were placed on both sides. The outside is low water, so has succulents, geraniums, and a very overgrown lantana. Plus a bougainvillea and a rosemary bush.

The inside planting area gets much more water so has different annuals at different times plus carrots and other vegetables interspersed. On the right side (looking downhill) is the herb garden, dill, thyme, parsley, marjorum. One the left side which gets dappled shade is the vegetable box which grows salad greens, onions, and chives. Next to it in the shade is some mint.

Prostate rosemary with lttle blue flowers, Vicks plant (plectranthus tomentosa), a succulent whose leaves smell like vicks vapor rub, bougainvillea, and a Pachyveria fill this large planter that was intended to be part of an outdoor kitchen.

The pine tree on the front left was a living Christmas tree planted in the 1960s. On the left are two jacaranda trees and California (aka Peruvian) pepper tree (Schinus molle) providing dappled shade to the back that were planted when the house was built in 1958.

6 thoughts on “My Garden was on Today’s Tour”