Recently ethnicity was a major factor in figuring out the family of the mystery father of an Australian women of mixed heritage: Chinese, Italian, and English/Irish.[UPDATE 4-APR-2020: no help needed, all resolved now.] 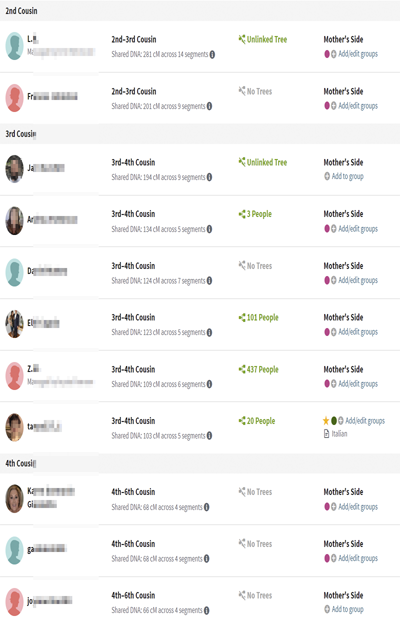 One interesting piece of information from her 23andme test was that her X chromosome has no Asian ethnicity at all. How is that possible since her father was half East Asian? 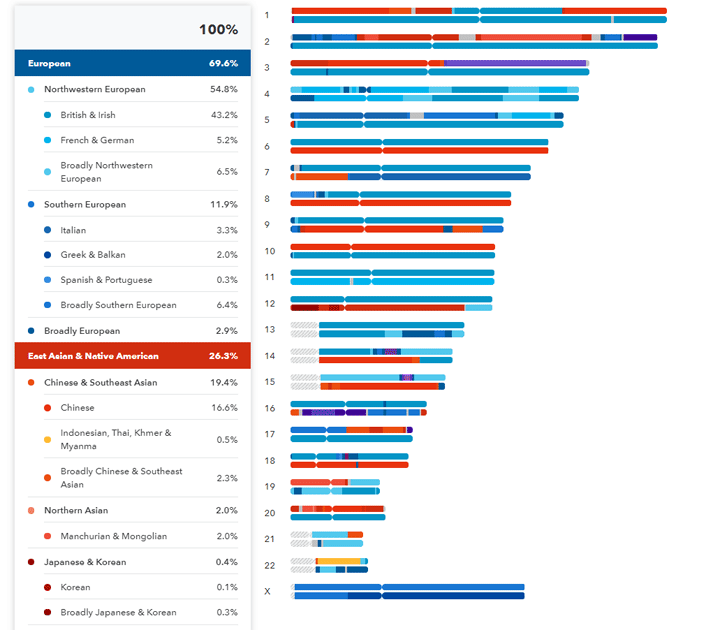 The chromosome map of Elana’s ethnicity from 23andme

Note the icons that DNA2tree put in, making it easy to see which are the ancestors of her matches

Since men give sons a Y not an X, the way that she would get no Asian in her X would be that her father’s father was the Chinese/Korean individual.

After the recent update at Ancestry Elana’s Italian went down to 1%, but 23andme shows 11.9% Southern European and they are often the most accurate on this. So my theory was now that Elana had an Italian great grandparent. Ancestry shows the total of Greek, Portuguese, French, and Italian at 7%. So what part of Italy has that mix? Sicily is the crossroads of the Mediterranean…

Normally we look for where the family trees of the different cousins on the father’s side converge, with so few matches would it be possible to use ethnicity? The plan is to look for a man with an East Asian father and a mother with one Italian descended parent and the other of Australian English descent.

So I asked Elana to star all the paternal side matches to make it easier to use automation (click here  for my post on that). The idea was to use Genetic Affairs (GA) to cluster just her matches on her dad’s side and show some trees for common ancestors. More recently, GA has added some rule based ways to select matches but both people have to be shared with the account being used.

The next step was to run a DNA2tree which has the option to gather the matches which are “not in common” with the first favorite. Thus adding a star to her tested mother let us use that option. A very large number of her more distant 4th cousin matches were descended from a Thomas BUGDEN 1811-1898 so I had DNA2tree build that tree for our search. This looked like her dad’s Australian side.

The plan was to build that tree down until we found a Bugden descendant marrying an Italian and their daughter marrying an East Asian man. DNA2tree only lists the children with DNA match descendants, of which there were five, so I had to add the other 12 children, one of whom was likely her ancestor. Time to recruit some help. I got Peter O’Brien, a search angel in Australia who had helped me before, to go to work on that tree. Building a tree of Bugdens with that many branches was going to be quite a chore.

Often in these cases it is better to start with the common ancestor with fewer children, so perhaps the Italian side? Another useful technique is, if you have the surnames from the one side, to look for them in the other side’s trees. Our Italian helper, Rocco Joseph Hindman, said look for the surnames RUSSO or Tesoriero. He had looked at the Mollica common ancestors found by DNA2tree but closer study showed that in that Mollica family there were two related Russo spouses. Endogamy also seemed to be a factor among those Sicilians.

Peter found a Bugden descendant who had married a RUSSO! And their daughter Lyla married twice, once to someone named Robert Kwan, who was born in China to Shu Pung Kwan and Shui Fa Dong. Robert and Lyla lived in the greater Sydney area and had two sons in about the 1950s. The problem now is to find them. One of them is Elana’s father. I can supply their names and likely birth years to anyone who wants to help, but my policy is never publish the names of the living without permission.

It is much harder to find people who are alive, especially in a country I am not familiar with, usually it is via obituaries of their parents. If I have any Australian readers who can help with this, please contact me. A closer cousin, that Elana is in now in touch with, thought that one of those sons is an actor. All clues and ideas are welcome!

UPDATE 10 Mar 2020: No help is needed any more. Elana is now in touch with her father. Sadly he was married at the time of his encounter with her mother so this has not gone over very well with his wife!

The family tree for Elana’s father

4 thoughts on “Can ethnicity help with unknown parentage?”