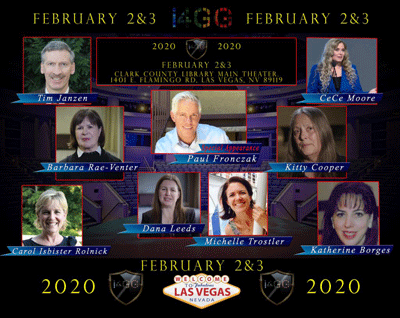 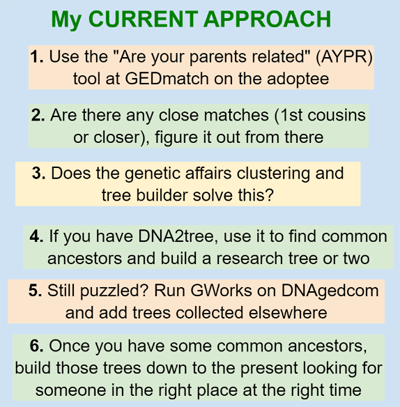 I took a quick look at her Ancestry match list and saw several paternal 2nd and 3rd cousin matches so I told her that it would be pretty easy, then quoted her my discount rates and a estimate. The next day I sent her the wedding picture of her father’s parents. She and her family drove to Oregon after Christmas to get to know her half sister and Dad. What a magical Holiday it was for all!

The main tools I used for her case were DNA2tree, and Genetic Affairs clustering with tree building. With six paternal second cousin matches it would usually be quick, but four of them had no trees. At least those four looked to have real names but they had no surnames in common. One match had a sizable tree and although the other second cousin had only a three person tree, his mother had a Slavic surname that was also in the large tree. Time to use some automated tools to search the 3rd and 4th cousin trees as well.

The Kentucky family found by Genetic affairs – DeDe’s great great grandparents are on the far left, she is from another daughter, so the larger matches are 2C1R, and the others are 3rd cousins.

Clustering from Genetic Affairs with tree building found a family with deep Kentucky roots, shown above, that matched the listed community at Ancestry. DNA2tree found a coal mining family in Pennsylvania with origins in Yugoslavia that included the surname of interest. Actually they both found both families but DNA2tree built me the Yugoslavian family tree. As always, I had to build the trees of the children whose descendants were not tested, eight of them. Tree building is the expected grunt work of these searches.

Copying other trees comes in handy when you want to make a quick and dirty research tree to take advantage of the Ancestry DNA hinting system. Sometimes, as in this case, you find someone who is not a close DNA match who has a large and extensive tree that you can copy. There is even automation to help with that process, click here for that blog post. 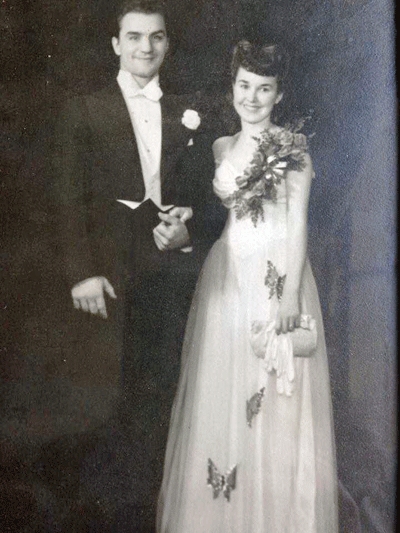 The wedding picture I sent Dede of her paternal grandparents, used with “Ron’s” permission (from his tree)

By using those ancestor green leaf hints on this test tree, I found a tree that had both the Kentucky family and the Yugoslavs! Another technique that can speed up these searches is when you find a large tree for one side, search it for the surname from the other side. A marriage between those two families would have to be Dede’s grandparents unless there was more than one such marriage (brothers marrying sisters and the like). There was just one such union with just one son. Further sleuthing at newspapers.com found that the son had even been stationed in San Diego, where Dede was born, at the time of conception.

Now I sent Dede her grandparents wedding picture and told her to contact the owner of that tree, let’s call him Ron. An important step in this search was to click on the name of owner of that great tree in order to go to his profile. I saw that he had written a friendly introduction and he had last logged in “today.” Active researchers are likely to see and respond to messages.

Ron was helpful and nice and had even solved a few adoption cases with DNA himself. Once he heard how we came to our conclusions, he offered to send Dede’s contact information to her probable half sister, his cousin, with whom he was in touch. The happily ever after progressed from there.

I love it when it all comes together and everyone is happy! It does not always happen that way. Many fathers claim to never have known that woman … see my post called Not Always a Happy Ending; but more often in my experience, the new father is thrilled and had never even known about the pregnancy.

Dede’s bio Dad and family welcomed her with open arms; they are thrilled to now have grandchildren and great grandchildren (their daughter has no children). They are teaching Dede all about Yugoslavian culture. In an interesting twist, Dede’s husband is also of Yugoslavian descent. Dede said of her sister, “She and I are like two peas in a pod, same body shape, teeth, and so many little things in common.”