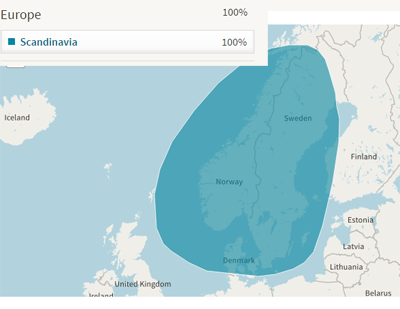 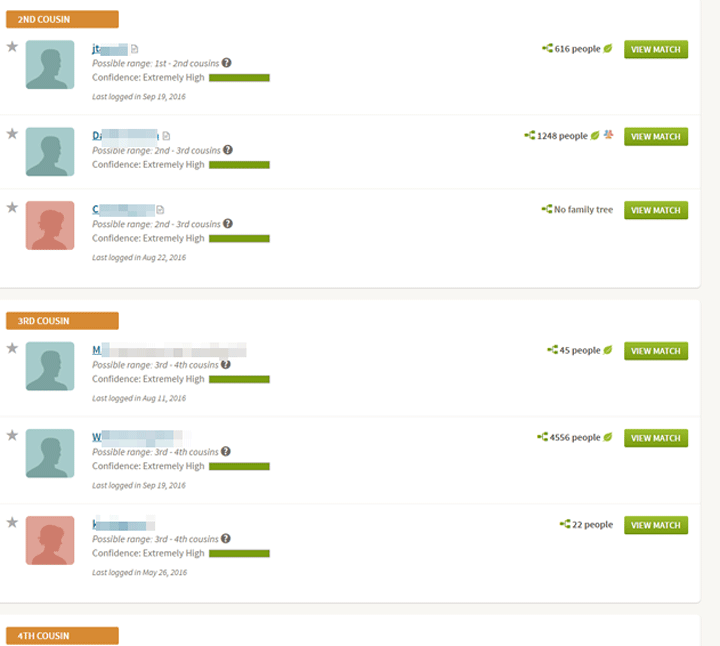 As you can see from the green leaves, ancestry found the relationships for three out of four of those top matches. Her best match, jt, is a second cousin on her Sveen line and they are now happily messaging back and forth. Her next match, D, is a third cousin of mine whose test I manage and he is J.M.’s known second cousin on the Munson line. Thanks to me they have been in touch for a while.

The best third cousin match with the small 45 person tree turned out to be a second cousin on the Thompson line. Interestingly the ancestry matchup shown below only finds their common great-grandfather because J.M.’s cousin used the married name for his wife in her tree while we have her maiden name in our tree. Often for those of us Norwegians with widely varying spellings, ancestry will miss one half of the match or put it generation further back so it is always good to look at the matchup carefully.

The lowest second cousin match, C., did not have her tree connected to her DNA test but when I clicked on the view match button, I discovered she had a tree that was not connected to her DNA test (see below, red arrow is my addition) so I selected it. The tree showed a home person with the same name as the match name and I immediately saw J.M.’s Nelson great-grandparents on this tree, so yet another second cousin. I wish things were this easy with some of my other cousins!

Over the next several days, I worked down through J.M.’s third cousins and best fourth cousins and discovered that many really do share great-great-grandparents with her, but either due to spelling issues or trees not connected they did not have green leaves.

I decided to use red check marks on an image of her tree to show which lines are proven with DNA thanks to Michelle Trostler’s tip (she used stars) discussed in a previous post. I also outlined in blue all the ones born in Norway and added a yellow highlight for our shared ancestors. Here is the result so far. 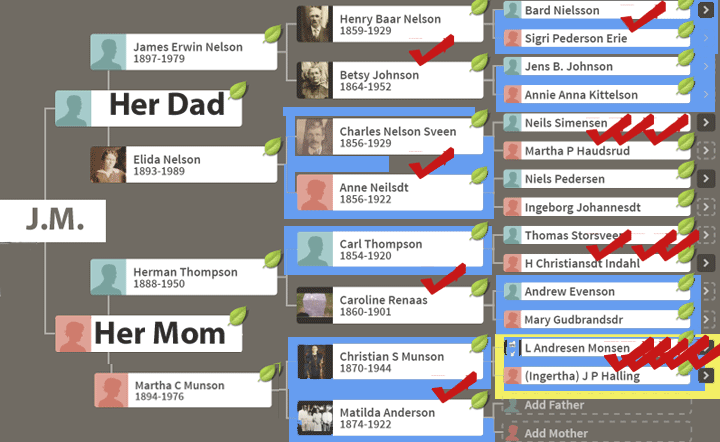 I suppose you are noticing the blank parents for Matilda (Mathilde in Norway). Sadly a very common name but when I am next in NYC, I will get their marriage certificate from the municipal archives which will hopefully have her parents’ names.

Of course I uploaded J.M.’s results to GEDmatch. WOW the new generic upload was amazingly fast. It took less time to process (2 minutes) than to upload! Next to add her to DNA.land whose ancestry composition I like the best. So perhaps a future post will look at some of those more ancient ancestral traces found at those two sites.

Thank you my perfect cousin for testing and giving me your data!

12 thoughts on “My Perfect Cousin”