The DNA results are in and they confirm that we have found the sperm donor, my late husband’s second cousin once removed. This cousin now has 8 children instead of none. Back then, donors were promised anonymity, but DNA testing has changed that; if their close family or cousins have done DNA testing, then it is likely that they can be identified.

My feelings about working on sperm donor cases are mixed. In my opinion, the children are entitled to their paternal family history and medical information, but they need to respect their donor’s wishes for privacy. He may prefer not to be in touch with them. 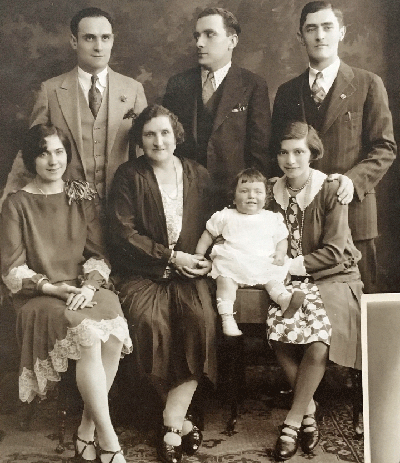 Tieger men with their mother. The baby is the mother of Elton. Back: Henry, Bernard, Rudolph. Front: Jeanne, Amalie, baby May, Beatrice

In this case, it was also about filling out my husband’s family tree. Like many Jewish people of Eastern European origin, Steve did not know the names of his great grandparents or even where they were from. His parents left Vienna, Austria, after Hitler invaded and were grateful to escape with their lives. His mother’s siblings and their mother were already in the New York area, so those family members were known. My own research – using the Viennese Jewish records microfilmed by FamilySearch.org – had turned up some information about his grandparents. However I did not find his great grandparents.  We needed to know them, or at least the siblings of each of his grandparents, in order to find any unknown second cousins. I did have the ancestral towns on his mother’s parents’ sides, but not on his father’s side.

Now to the full story, two years ago, Steve was contacted by two second cousin level matches at different sites. Ethan and Tamara. It turned out there were eight half siblings fathered by his unknown 2nd-3rd cousin, supposedly a medical student in NYC in the mid 1970s. My husband knew of no such person. Ethan had also done a Y37 test and had no close matches. His Y haplogroup was in the T-M70 group, not the same group as my husband’s.

Initially, I thought that the donor was on Steve’s father’s side because the match to Steve’s maternal first cousin once removed Hilda was very low (13cM) and could just be Jewish noise plus there were no matches to Steve’s mothers mother’s LILIEN family, many of whom are tested. On the paternal side, all I knew was that Fred Cooper’s original name was Moshe Kupfermann and he was born in Poland. I had asked my friend Israel Pickholtz for some help (click here for his blog) researching the Kupfermanns, but we had not made any progress when more matches came in. These new matches proved that the unknown sperm donor was actually on my husband’s mother’s father’s line, the TIEGER family from Solotwina, Galitzia, now Ukraine, (click here for more about that locality). That was the side I had found the most records for, but even so I did not know the names of his maternal grandfather’s siblings or parents.

Genetic genealogy is often a waiting game. About a year after I started to build Steve’s tree, he got a set of second cousin matches at Ancestry that also matched the half siblings. They were clearly on my husband’s Tieger side. With the help of an Israeli researcher who is building a database for Solotwina I was able to figure out that they were descended from a sister of Steve’s maternal grandad. Since their matches were even larger than Steve’s with the half siblings, I had Ethan send a kit to another Eagle/Igel cousin to do some target testing. Ethan also sent a kit to another Tieger from Solotwina found by that Israeli researcher. Then we waited. Neither kit helped our case. 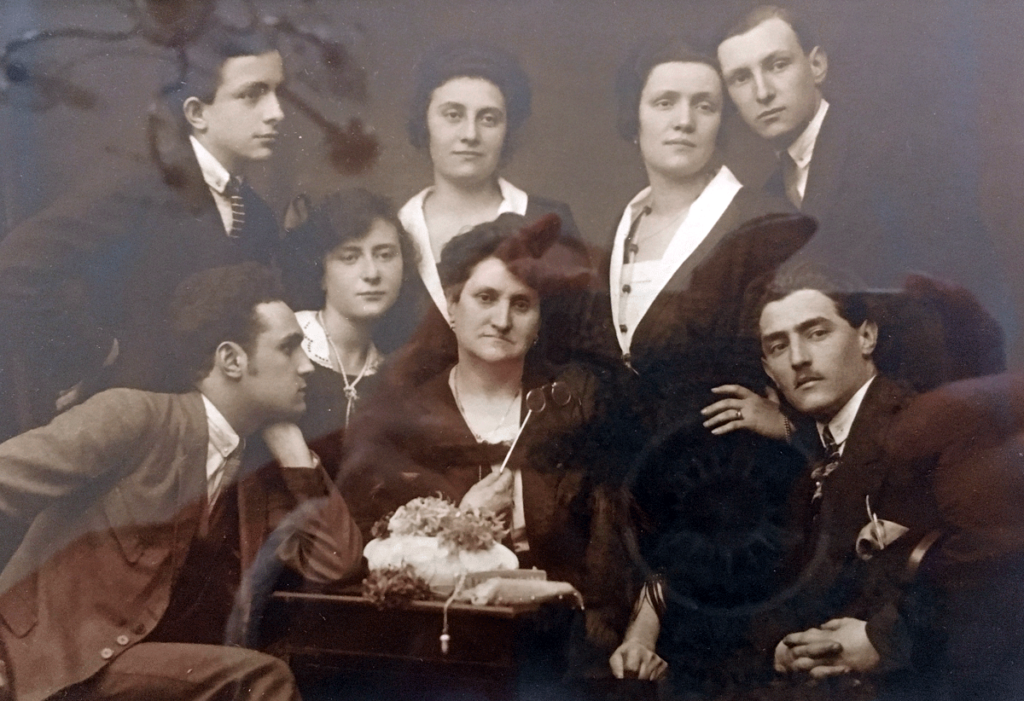 Tieger siblings with their mother. Steve’s mother Martha is the leftmost woman. The hat is likely made by her (a milliner).Back:Bernard, Claire, Gisa and husband Salomon. Front Henry, Martha, Amalie, Rudolph

Another problem was that Steve was a late in life baby, his mother was 42 when he was born. This meant most of the relatives that were his age were a generation further down the tree. The ages plus the range of DNA matching from 171 cM down to 79 cM of the half siblings made me suspect that they were actually the children of a second cousin once removed of about the same age or a little younger than Steve. In other words, we were looking for the son of a second cousin. Now to find him. Thanks to the Eagle and Winter family matches, I had the names of more siblings of Steve’s grandad so I started researching them, but life got in the way. My husband’s health went downhill.

About two weeks after Steve died, I logged into his various DNA accounts and saw a new close cousin match at Family Tree DNA, Elton. I recognized the surname and sent him an email. Is your mother’s maiden name Tieger? Are you my husband’s first cousin once removed? Yes was the answer, but get in touch with my dad Ed, he is the genealogist in the family.

I was a bit dubious that an unrelated individual could be of any help but never underestimate a fellow genealogist. It turned out that Ed had been in touch with a branch of Tieger cousins that were descended from yet another sister of Steve’s grandad who had married a Sporn. He had received the names of the great grandparents from Steve’s 2nd cousin once removed Doug who had put together a huge tree by interviewing his mother and grandmother in the 1970s! Now I had the names of all the siblings and the top parts of their trees.

In my conversations with Doug, he told me that his brother Ian had been a sperm donor back in NYC in the 1970s. Oh my!! Could the search be over? Ethan quickly sent out kits to Doug and Ian. Meanwhile I looked at Ian’s other ancestors and saw many matches from other lines to the half sibs; so I told them I was fairly certain that their bio Dad was found. Ian seemed open to getting to know his new family and his sister Eloise is over the moon at having so many nieces and nephews when she previously had none.

Last week the Ancestry results came in for Doug. He is clearly the uncle of the half siblings. Even though his Sporn side grandparents were cousins, there really is no other explanation for these results given the known facts and the other matches: 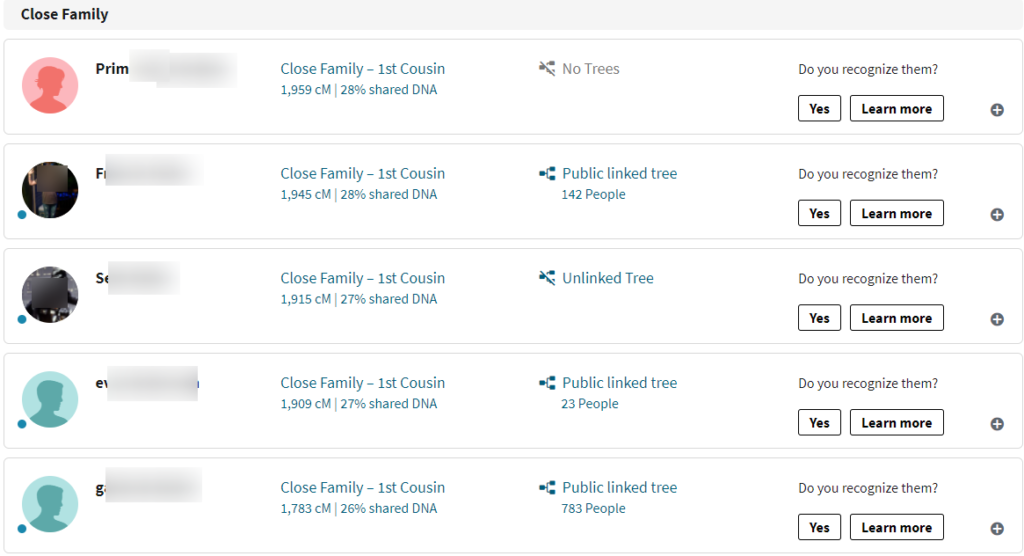 Doug’s matches to the five half sibs tested at Ancestry

We are still waiting for the 23andme results for Ian but we know what they will show.

Steve must be smiling down from wherever he is now. Thank you Ed and Doug without your genealogy work we never could have solved this.

UPDATE 29-JUL-2021: Ian’s results are in and they confirm that he is the sperm donor.

N.B.The surnames in this post are the real ones, to help other genealogists, but all the first names are changed for privacy

UPDATE 2022: I made a presentation out of this story which I gave for the 2022 RootsTech connect. Here is the YouTube link – https://youtu.be/iKRjFfNcpug

7 thoughts on “A Sperm Donor is Found with DNA”