Let’s look at the rest of the columns for my Dad’s top match. Clicking the tree icon would take you to the user profile information. The cM shared are listed next; 40.3 is match that can be anything from a 4th to an 8th or even more distant cousin. Then the name of the possible shared ancestor, first in my GEDCOM and then in my match’s GEDCOM; either one can be clicked on to go to that person’s tree entry. The 8G is how many steps down from that ancestor my Dad is. If you click that, you see a descendant list from that ancestor in your tree. Notice that his match is also 8 steps down, so in the same generation. Subtract one to get the cousin level so this is a 7th cousin.

I like the display you get from clicking on “PTH” (Up/Down Path column) the best as it shows both ancestral pathways side by side and lists the actual relationship, as shown in the image above. Plus you can see the place locations which can help to quickly rule out people with very similar names.

The “PTH” between my and my Skjold 3rd cousin (note we have Halvar born in different locations, lowering the score)

The other columns are “CMP” (Compare GEDCOMs) which lets you get a full comparison of your two GEDCOMs. Perhaps there are more ancestors in common? Then the GEDCOM id column which has the id of the matches tree, clickable to the matched person. Using those features is covered in my more general article on GEDCOMs at GEDmatch, mentioned above.

The final column has the match score for how likely this is actually the same ancestor in each GEDCOM. Higher numbers are better. So far no MRCA with a score of 2 or less has been correct for me, so on my subsequent runs I have changed that number in the form requesting this search to a 3. Some of the 3s are good, most are not.

Interestingly since I ran the comparison for Dad on the first day of this tool and left the browser screen up when I clicked two days later the little temporary files to display the pathways expired. So it is a good idea to take screen shots or cut and paste the information to a word document. When I reran the tool for this article it found many more matches with trees, not all recently uploaded; it now shows the closer relatives. I was puzzled when they were not listed on the first run. Obviously there have been improvements already.

Birta Olsdatter and Brita Larsdatter are not a match, different locales

A problem for me is that Norwegian naming is not standardized between web sites. I prefer using the farm name as a surname and the patronymic as the middle name as is the standard at GENI.com but the GEDcom I have on GEDmatch is an old one without all the farm names. I hate to overwrite it with my latest GEDCOM because then all the confirmed tree matches in it will be lost. Perhaps I will give my brother’s kit the latest GEDCOM and see what is found.

Going quickly through Dad’s initial list, all the ones where the patronymic is not a very close match are not good. So both the pair Hansdotter and Jansdotter as well as Jonsdotter and Olsdotter are not the same person. Amazingly that 16 step descent from Tore Torkellson Koll is accurate but the common ancestor is really his daughter Karen which we have listed differently in our two GEDCOMs. Note that there is no guarantee that the 11.9 cM DNA match is actually from this ancestor. Likely there are other common ancestors that far back.

Tore Koll is a match, but the common ancestor is his daughter Karen

The Koll/Skiftun family is a well known noble family from Hordaland so lots of people have them in their trees; in fact, the second time I ran this tool there were 2 more matches with that ancestor in the list. It is easy to trace your ancestors back to the 1600s in Norwegian records but before that, it was mainly the noble families who were recorded.

The 12 step Brigit Skiftun (same Koll family) match is correct, we just spelled the father’s name differently. Looking at the path, again the actual common ancestor is the next step down.

Brigit Skiftun is a match, we spell her father differently, but her son is the MRCA

The 6 and 7 step Ole Hansen Fatland match is accurate; I have a number of distant cousins descended from him on GEDmatch but not all with trees. Another one did turn up in the second run. I often blog about Fatland farm (click here for my translated farmbook entry) and even visited there on my trip to Norway

Reviewing that surprising large match of 40.3 cM to my Dad’s 7th cousin Sherril, I discovered I had been in touch with her son Michael before and we had found a different common ancestor. His grandmother was descended from Etne Hordaland farmers, as was my great grandfather and that area is very intermarried. As it turns out, two brothers married two sisters doubling up on the common DNA in their descendants. So we have at least their parents, including the one found, Anna Ormsdatter, as common ancestors. See the images of the extracts from the GEDmatch pedigree tree displays below.

This match has two matching segments which are shared among a number of 4th and 5th cousins and they are assigned in my chromosome map to a different ancestral line from Etne, my Ve line. Looking deeper, I found that Michael’s grandmother’s other Etne side also had a far back common ancestor or two. More research is needed. Have I found an NPE in the 1600s?

More GEDCOMs are being uploaded to GEDmatch every day, so run this tool often. 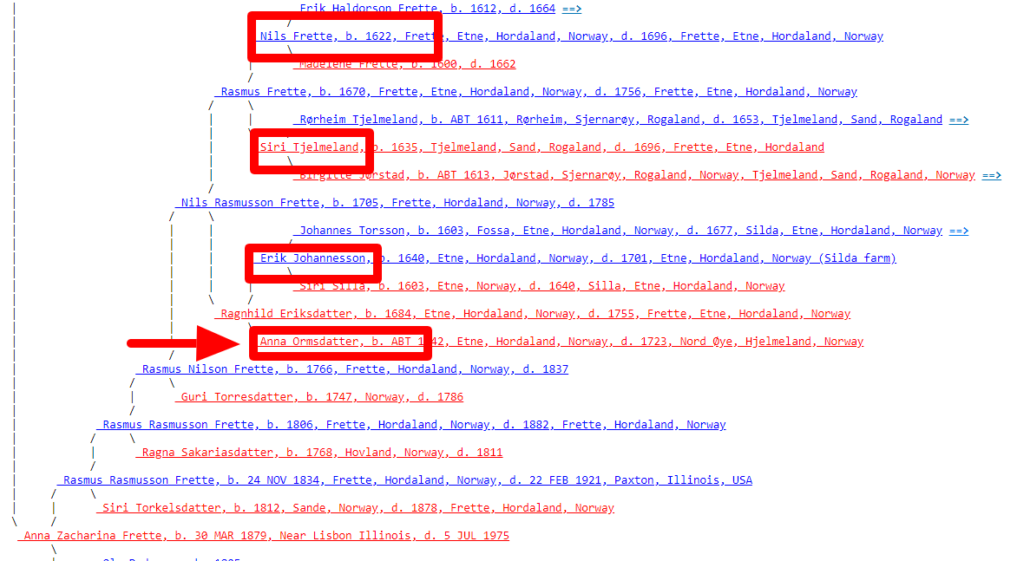 11 thoughts on “Tool to find common ancestors at GEDmatch”