It is difficult to solve adoption cases in endogamous communities because everyone will share the same 4th and 5th grandparents, often multiple times, so the methodology for finding a birth parent from 3rd and 4th cousin matches just does not work. You have to wait for a few second cousin or closer matches.

Tessa was looking for her unknown biological father. Her mother had given her a name, Rudy Padilla, and said he was perhaps Mexican. I ran a GWorks for her which I showed in my lecture about unknown parentage at the SCGS Jamboree. This is the full story. 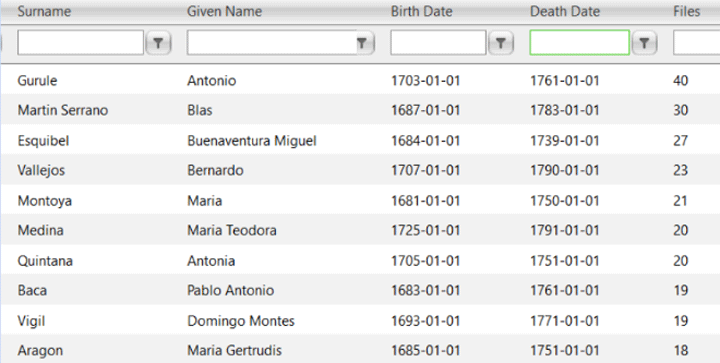 The Compare Trees at DNAgedcom from GWorks for Tessa

I had never seen ancestors who were in 30-40 trees before! How can that be? Perhaps endogamy? Then I looked at the names and recognized many of the surnames. These are the Spanish soldiers who were among the earliest European settlers of New Mexico. 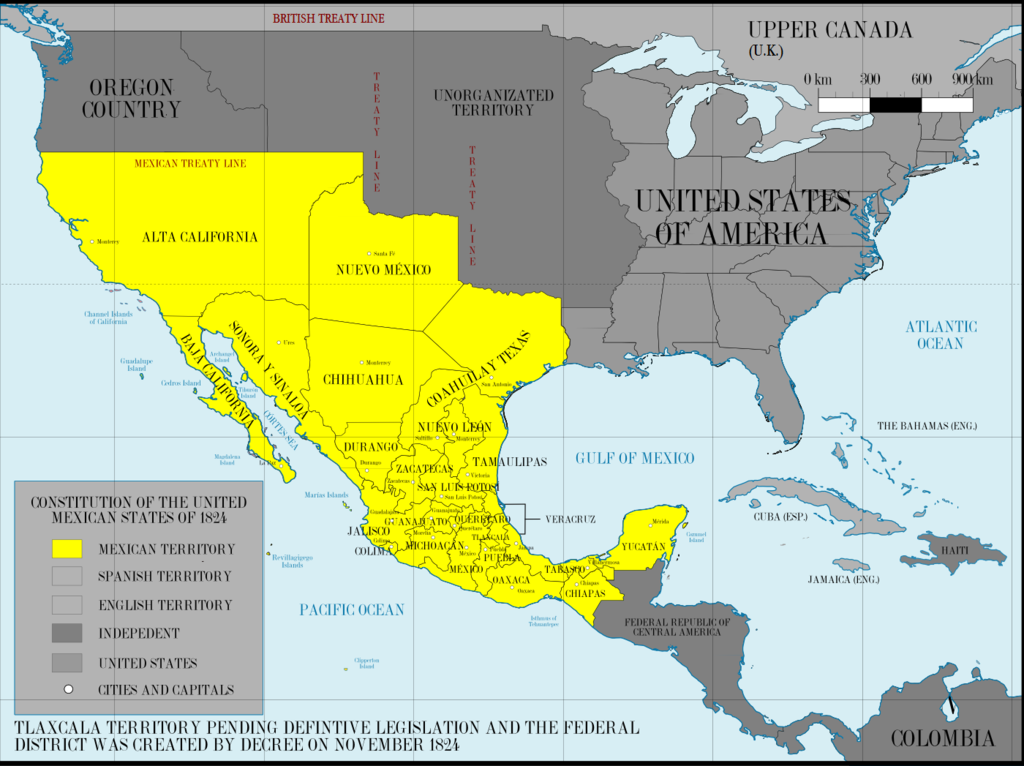 New Mexico in 1824 from Wikipedia, click image for the article (see *map credits)

These soldiers who came to the Southwest in the 1600s and 1700s mostly had to take Pueblo women as brides or not get married. A few brought wives with them from Mexico of presumed Spanish descent. For many years these Spanish “first families” of New Mexico hid the native part of their roots. Now many are proud of this heritage. Click here for an article about that which mentions the New Mexican woman in those Ancestry

I told Tessa that success finding her dad could take a very long time since she would need to wait for close matches, but to please upload to MyHeritage and Family Tree DNA to look for more relatives. She had tested at both 23andMe and Ancestry DNA

she had three second cousin matches, none of whom had responded to her messages. Only one, let’s call her Gina, had a tree connected to her DNA, but it had just her parents names. Another had a tree on the view match page where everyone was private and the third also had a mainly private tree with the names of a few great grandparents. We were able to build a tree from the parents names for Gina but it had no Padillas. 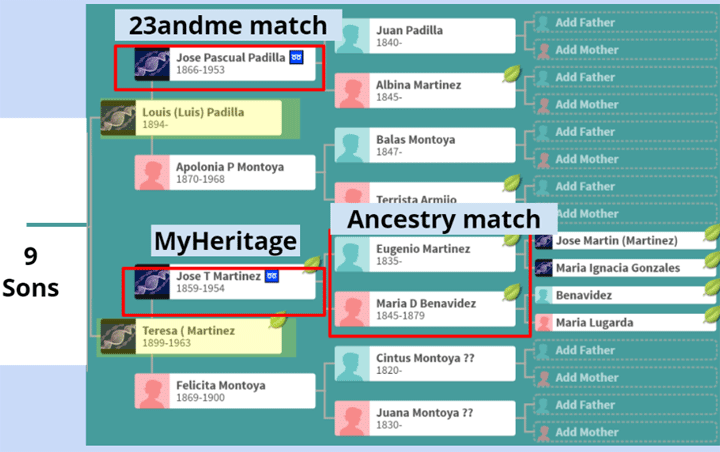 How the trees of Tessa’s second cousin matches intersect

Tessa’s test at 23andme had one second cousin match, let’s call him Gerry, whose wife Laila actually responded via email to my message. She was into genealogy and was incredibly helpful explaining the family tree which she had built at FamilySearch. Laila suggested that Tessa might be her husband’s half first cousin once removed because her husband was from one of the youngest Padillas via the second marriage. This probable great grandfather, (Jose) Pasqual Padilla had 24 children and the right surname. A lot of tree building later, there was no one named Rudy or Rudolph and no obvious connection to Gina.

Another second cousin match, let’s call her Mary, turned up at MyHeritage and again from just the parents names we were able to build a tree. Eureka! She shared great-grandparents Eugenio and Maria Martinez with Gina. So now we had the grandparents of and a possible surname for the bio dad’s mother. This second cousin turned out to also be a first cousin once removed as her grandfather (Jose) Trinidad Martinez had more than one wife and many many children (see his obituary from newspapers.com below).

Trinidad is the son of Eugenio and note the Mrs Padilla! Yes this was a key clue.

Now we checked all the sons of Pasqual to see if any of them married a Martinez descended from Eugenio and we found only one such marriage. Exciting! This joined tree is shown above. Of course, there were 12 children of that marriage. Happily only two of the sons were in the right place (California) at the right time and old enough.

Now Tessa showed off her sleuthing skills, she called the librarian of the small town that most of these Padillas were from and got copies of their obituaries and lots of information. Neither possible father was still alive but she tracked down a son of each one of them and talked them into testing (Thank you so much search angel Tom K. for those two Ancestry

While we were waiting for those results, Tessa suddenly got a new match at 23andme of 10.38% and 774cM with the grandchild of one of the possible Dads. This made one man much more likely and validated our search results nicely. Soon after, the kits for her possible half brothers came in and the case was solved! Her new family members have been very warm and accepting.

Some key points from this search:

6 thoughts on “An Endogamous Success Story”