. My favorite is that the total amount of DNA shared with each DNA relative is now shown on the match list page in centimorgans (cMs). This means that you no longer have to click through to the match page to find that number. Those total cMs are needed in order to look up the possible relationships at the DNApainter calculator. You want to check there because the cousin designations at Ancestry

are just groupings based on the amount of DNA and many relationships share very similar cM numbers.

Look at the current top of my 2nd cousin list. These are all children of my first cousins except C.S. who is the grandson of a first cousin. (spot quiz – what is my relationship to each of them? Answer at the end of this article). In each case it shows not only the possible relationship but also the actual cMs and the number of segments. 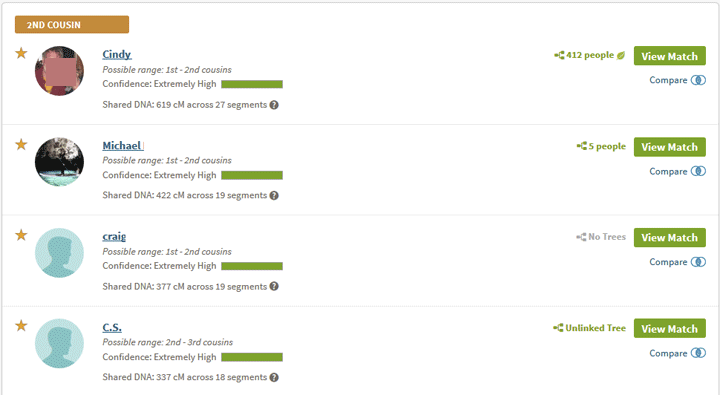 The other recent feature that I truly appreciate is that Ancestry.com

indicates whether there is a family tree linked to the DNA, a tree that is not linked, or no tree at all next to the View Match button. In the past there would only be a tree listed when it was linked to the DNA, so you had to go to the match page to see if there was a family tree that was just not connected to the DNA. A word of warning about unlinked trees, they may not be for the tested person. One of my real second cousins did his DNA test through a friend’s account so he is not in their tree at all!

Did you notice that little blue compare icon under the green View Match button? Click on that to get a comparison of the ethnicity of two tests. It always fascinated me to see the amount of difference between two full siblings. Here I am compared with my brother (click it for a larger version). 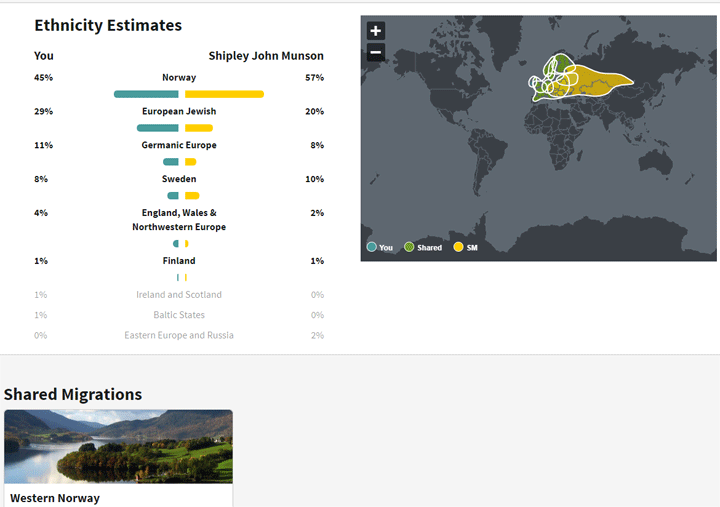 A word of warning. A friend complained that his sister only had a tiny amount of XYZ heritage while he had a good 33%. I pointed out that her ethnicity had not been updated to the new version. Once that was done, she had a bit more XYZ than him!

Another benefit of this comparison is the much larger versions of the profile pictures which are on top of the ethnic breakdowns on that page. Space considerations got me to cut them off in my image above. However it is quite nice to get a better idea of what your match looks like than you get from the tiny picture on the match page.

Now for a discussion of the new traits feature …
END_OF_DOCUMENT_TOKEN_TO_BE_REPLACED 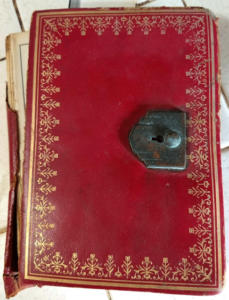