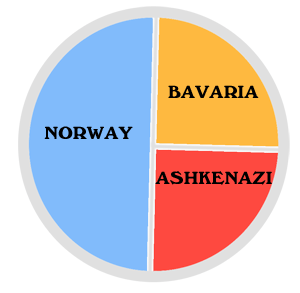 Both Ancestry and FamilyTreeDNA have recently updated their ethnicity results. As much fun as it is to look at your ancestry composition, those estimates do not really reflect the populations of today’s countries, but rather human migrations hundreds of years in the past. Therefore the big picture is more accurate than the smaller areas. Examples that I have found to be realistic are North versus South Europe or East versus West versus South Asia.

To the left is a simple pie chart showing the known ancestry for my brother and myself for the last 300 years or so. Our father was Norwegian American, documented back to the 1600s, and our mother was born in Munich to a Jewish father and German (Bavarian) mother. In 2016 I wrote a blog post showing how my brother’s ethnicity appeared at a number of DNA companies and third party sites (click here for that post). This post will look again at the ethnicity predictions for each of us from the main testing companies.

One thing I always find interesting is that they all show my brother Shipley with less DNA from our Jewish grandfather than I have. The variations between full siblings can be quite large.

My Origins at Family Tree DNA for my brother and myself

Nice and simple but not very accurate. We have no British ancestors in the last 500 years that we know of. However there is no such thing as German DNA because that area was a crossroads. It usually shows up as French, Scandinavian, British, or even Eastern European. Jewish DNA is quite distinct due to centuries of endogamy. Interestingly, our Jewish never comes out at the expected 25%. All the companies show me with more than that and my brother with less. Although you inherit half of your DNA from each parent, they do not have to pass you an equal amount from each of their parents.

Here are our results at MyHeritage: 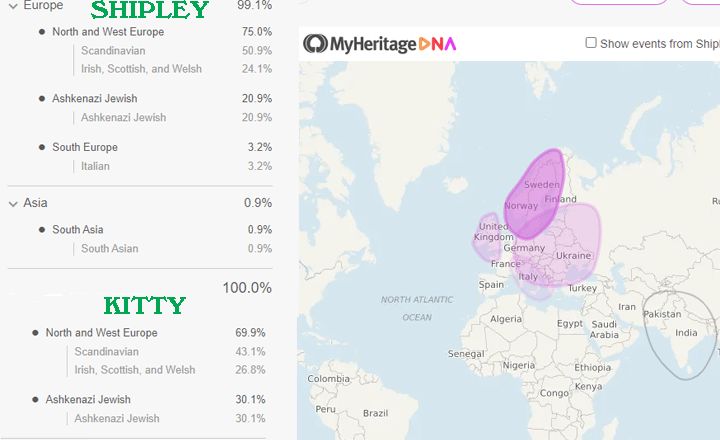 Our ethnicity predictions at MyHeritage

MyHeritage is an excellent site for working with your DNA since it includes a chromosome browser that shows triangulations and it also looks through user trees to try and figure out your relationships to your DNA cousins. However, although their ethnicity estimates have improved over time, like Family Tree DNA, they incorrecty find lots of British Isles DNA for us. They call it Irish, Scottish, and Welsh. The Jewish component is only few percentage points different from Family Tree DNA.

Frankly I find the estimates at 23andme and Ancestry more accurate.

In September, I wrote a blog post (click here) showing the changes at Ancestry where my brother and I lost all our “Germanic tribes” and gained some Jewish and more Norwegian. Here is the Ancestry image for both my brother and myself. Finally we are close to having the known 50% Norwegian! I like how they relate the results to your actual tree. The area breakdowns within Norway are quite accurate although the Telemark and Vestfold counties in Eastern Norway are missing, perhaps they fall into the general category of Southern Norway. 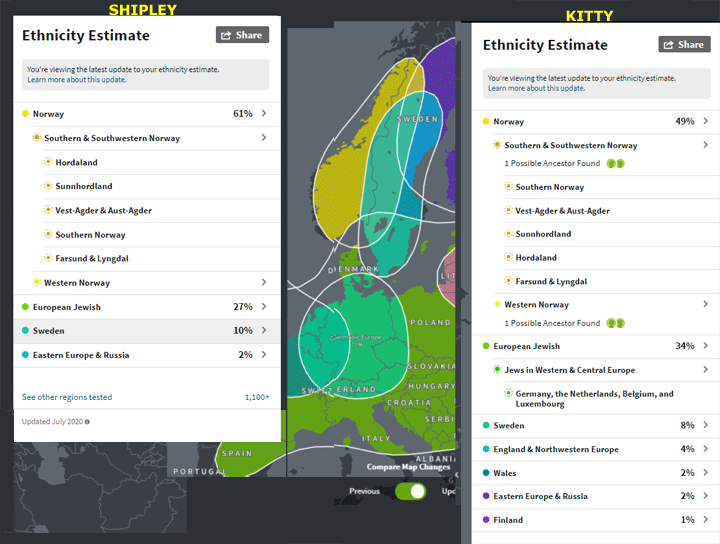 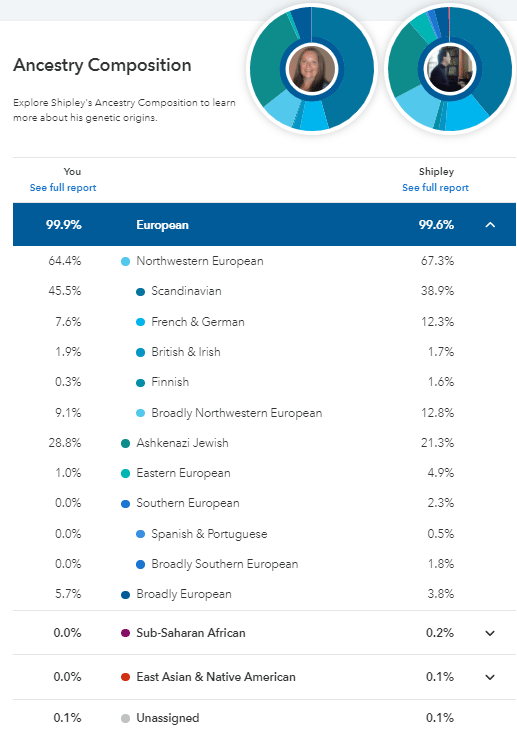 Here is the image from 23andme comparing me and my brother. I am always amused by the .1% Native American since we know we have none. Frankly anything under 1% is to be viewed with suspicion. 23andme will also show the ethnicity breakdown by segments on each chromosome which is one of my favorite features there.

Finally the admix utilities at GEDmatch are quite interesting, but are unchanged since that 2016 post. In fact they are mainly unchanged since a presentation I gave about using them in 2014 (click here for those slides)

In my experience, predicting the ethnicity for people of Northern Europen heritage like my brother and myself, is very hard to do accurately because there was so much mixing of those populations.