Did you know that your dog has 39 pairs of chromosomes? Many more than us humans. The pet DNA testing companies now have features similar to the people testing sites, relative matching, messaging, raw data download, health results, and even a chromosome browser and painting. 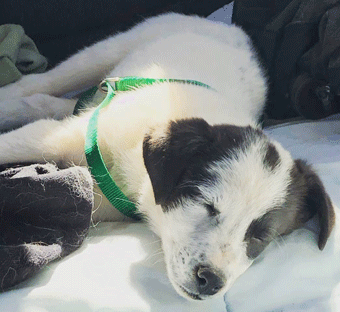 Rockie at about 6 weeks (photo by my friend Rochelle)

Last fall I was given a puppy, found by the side of the road near Shiprock, NM by friends of mine. Of course I had to test her DNA. This time I decided to use Embark (this link should give you a discount*). Last time I used Wisdom (click here for that post) which now claims similar features to Embark. The Embark test shows only 38 chromosomes, thus not the sex chromosome, the XY or XX pair. The test is an easy cheek swab and the results came back within a few weeks.

It is important to understand that we humans deliberately created dog breeds, originally to help us hunt or herd, but also for protection or lap pets. The Victorians developed most of the more recent breeds we know today. Wikipedia has a good article on dog breeds (click here) which says “In 2004, a study looked at the microsatellites of 414 purebred dogs representing 85 breeds. The study found that dog breeds were so genetically distinct that 99% of individual dogs could be correctly assigned to their breed based on their genotype…” That sounds like these tests are likely to be accurate as to breeds. 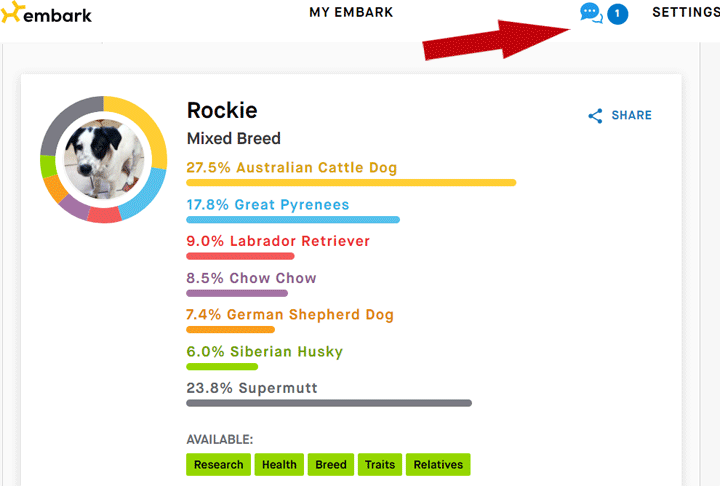 When I logged into Embark after her results came in, I saw the image above.  I was surprised that she had no border collie. because that is how her black and white markings looked to me, but apparently the white is from her Great White Pyrenees ancestor. On that home page there are many areas to explore. First I checked her health results, of course, and there was nothing bad there, phew.

Next I looked at the Breeds page which had the same image as above plus a chromosome painting by breed of her DNA. I can see that she has heeler (australian cattle dog) on both sides but Pyrenees only on one side. Both are herding breeds that might have been useful in the South West for cattle ranchers and sheepherders. 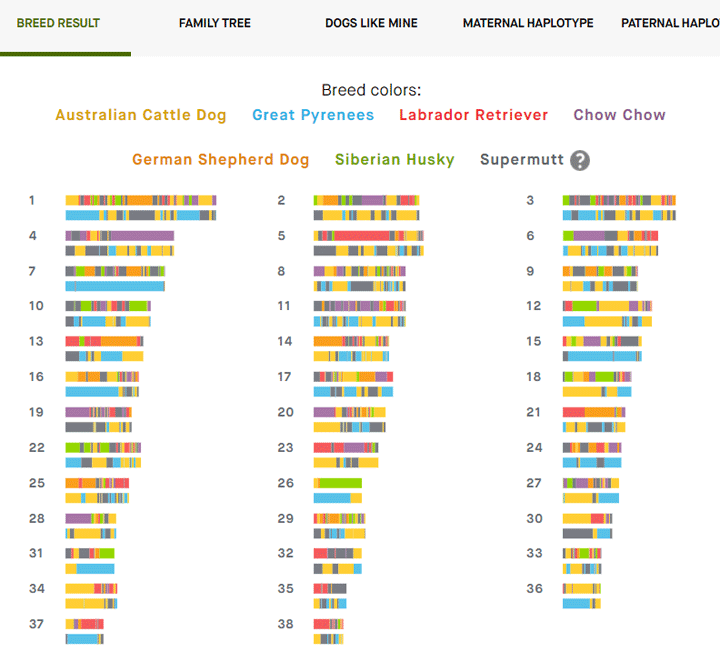 On that breed page there are five more pages in a submenu, including a link to the family tree page shown below and Maternal haplogroup page. It occurred to me I could explore the validity of the presumed family tree by asking her relatives’ owners for information like maternal haplogroup and type, whether related to the other matches, plus where the dog came from. You get to the relative page from the menu on the home page or breeds page. Rockie had three first cousin level matches and several good sized more distant ones. 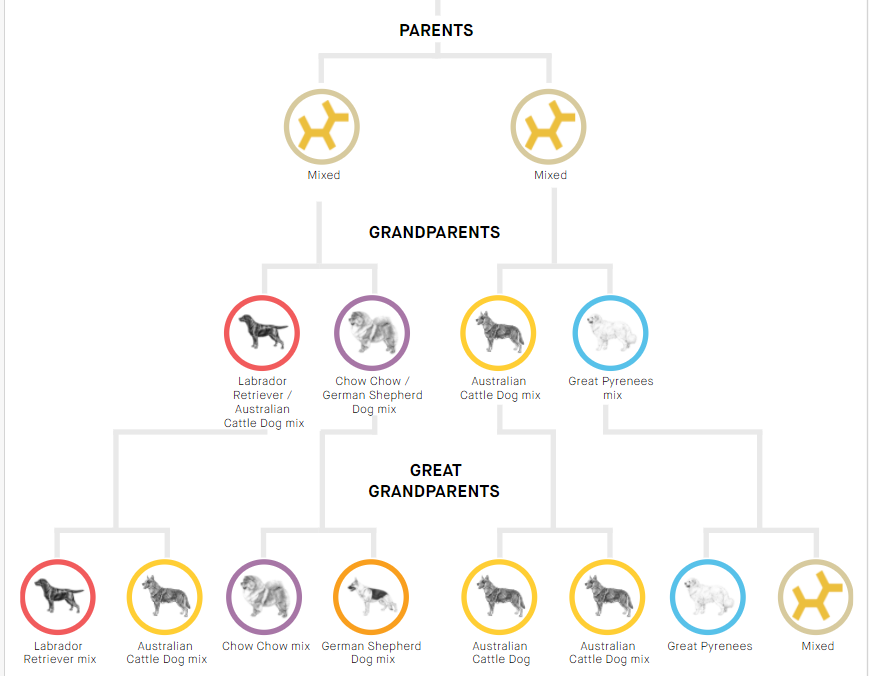 The messaging system is similar to other sites. You get an email when there is a new message and the response rate is variable. Rockies best match “A” was also found in New Mexico and shared Heeler, Chow Chow, and German Shepard but no Pyrenees. “A”s owner responded that he has no other first cousin matches. So no match to Rockies other first cousin matches, “R1” or “R2” neither of which have any great white Pyrenees either. Finally “A” does not share Rockies maternal haplogroup , thus is not on the direct female line. “M” was also from Shiprock, NM but my message to her owner went unanswered. Shared breeds are Heeler, Great White Pyrenees, and German Shepherd. Got an answer from a 2nd cousin “M3” who shares Rockies maternal haplogroup and also told me they had 9% with “R2.” Thus R1,R2 and M3 are all on Rockies mother’s side. A few more messages like these and I might be able to build her tree; of course a first cousin might be a half niece as with human trees, the amounts shared can be other relationships. 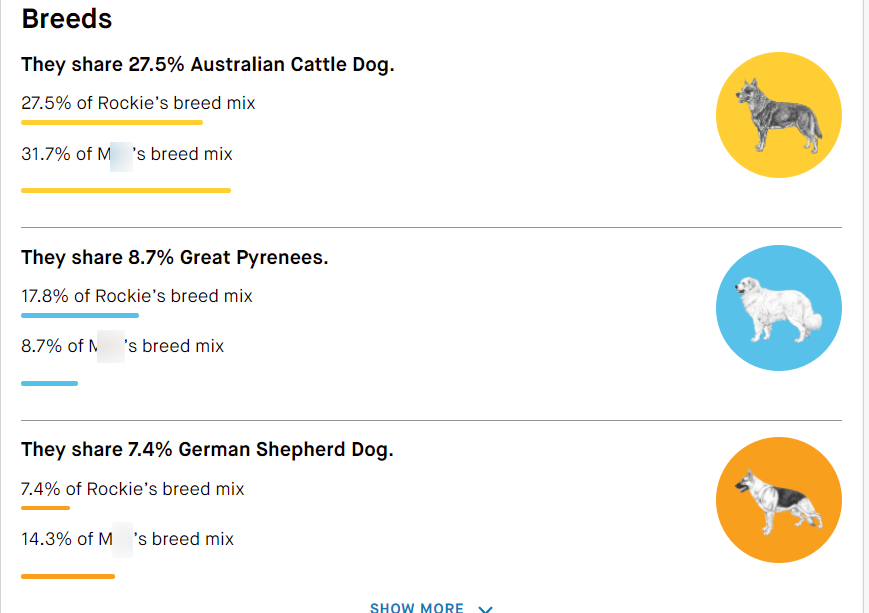 Perhaps a defect of this site is not being able to compare her matches to each other. Also the messaging system, like many of the human DNA testing companies, can be a roadblock to communicating. Most of the owners who replied only did so once or twice and then it petered out.

I could spend many many more hours on this but it is time to get back to human DNA. 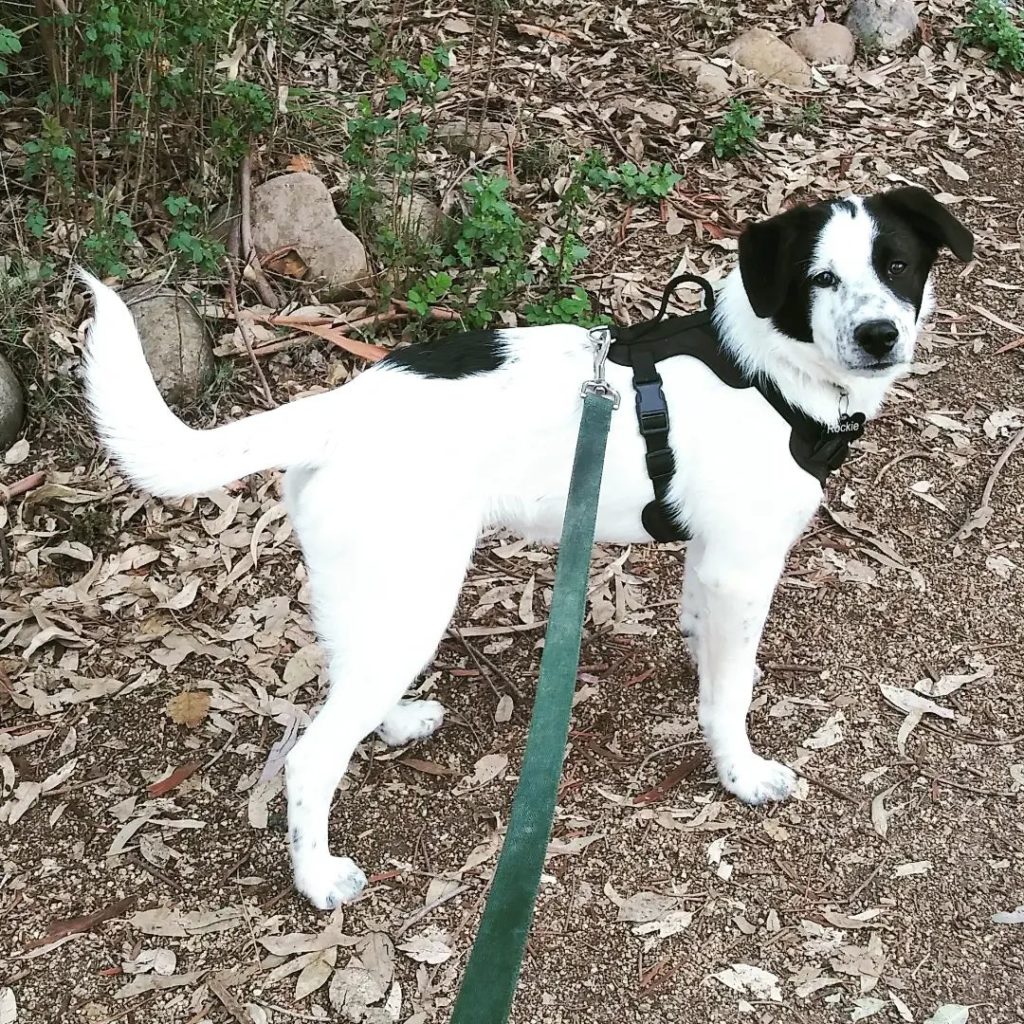 Rockie at 4 months, Embark predicts 42 lbs, but I think she will be larger

* I get a small amount from Embark also when you use that link.