Perhaps you are wondering who the Tubalar are? According to Wikipedia, they are “an ethnic group native to the Altai Republic in Russia.” It also helps to know some European history to interpret the rest. Parts of Northern Italy were at various times included in the duchy of Bavaria not to mention that all of southern Bavaria south of the Danube once was part of the Roman empire. I suspect that SouthWest Europe is part of our Ashkenazi heritage, at least the ancient Sephardic part.

Next case, 23andme, the speculative view  (more interesting than the normal view): 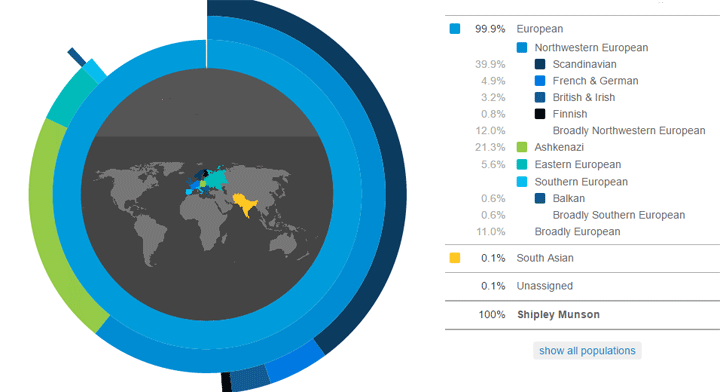 My brother’s Ancestry as shown at 23andme

Here the Norwegian shows as Scandinavian, British and Irish (our viking ancestors had relatives who settled there), and Finnish. Also the French and German. These results are actually phased with our Norwegian Dad so this is known. Notice that this is a “split view” with Dad’s contribution on the right.

23andme shows a higher percentage of Ashkenazi, 21.3% which seems a better fit with what we know. Remember you do not necessarily get exactly 25% from each grandparent, it can easily be a few percent more or less. For comparison my Ashkenazi at 23andme is predicted at 28% from the same grandparent. Finally the Bavarian must be the Southern and Eastern European as well as the various broadly Europeans.

Lets have a look at ancestry.com 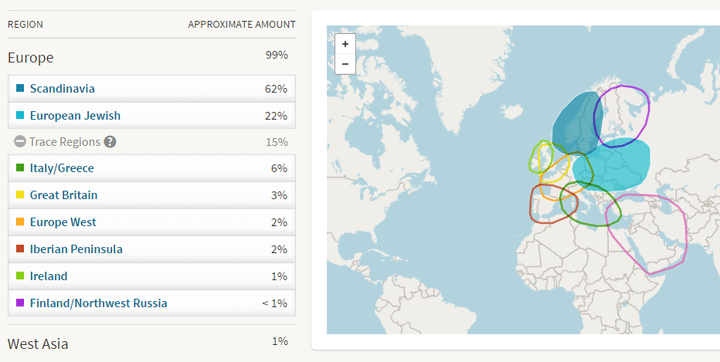 My brother’s ancestry at Ancestry.com

Well it seems to agree with 23andme on the percentage of Ashkenazi but some of that 62% Scandinavian has to be Bavarian. Did the Vikings get that far South? And most of those trace populations are probably the Bavarians except the Irish piece, we know the Vikings went there too.

How about Family Tree DNA? 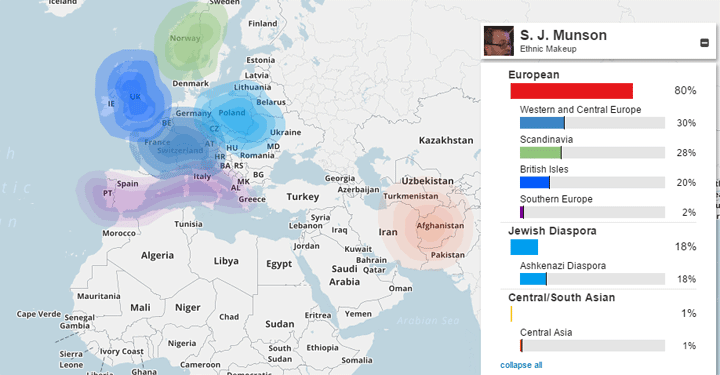 This chart is closer to DNA.land in the Ashkenazi estimate of only 16% but add the central Asia and Southern Europe to that and you get close to 20%. The British prediction has to be our Norwegians (yes the Vikings settled there too) add that to the Scandinavian and we are almost at the expected 50% Norwegian. So the Bavarians are Western and Central Europe. This all makes sense.

So what have we learned from this exercise? To look at deeper history when unraveling these predictions. One company’s British might be another company’s Scandinavian. Also to recognize that these predictions reach further into the past than our family tree does and may reflect earlier migrations around Europe. Finally, predicting deeper ancestry is not yet firm science or these companies would be closer to each other in their results.

Now for the completely different look of some of the GEDmatch calculators. My favorite for us Northern European types is the Eurogenes K12 calculator:

Here the North Sea and South Baltic would be the Norwegian plus most likely that Volga-Ural (the Tubalar again?) but where does the Ashkenazi fit in, Mediterranean plus SW Asia?

The default Eurogenes calculator is 13 so lets look at that one: 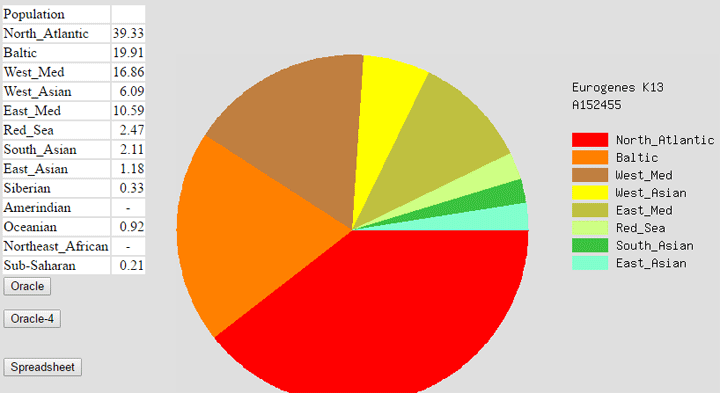 Well the North Atlantic plus the Baltic add up to more than 50% so some of that must be on the Bavarian side. The Ashkenazi would seem to be Western Asian, Red Sea, and Western Mediterranean with perhaps some of those trace Asian populations

Eurogenes has a calculator specifically for jewish ancestry, lets see how that comes out

Well it has less Ashkenazi than any of the others but if you add in the Eastern Mediterranean, the Western Asian, and the Middle Eastern it gets up to about 20%.

A few more observations and links:
The ISOGG wiki is always my go to place for discussions of genetic genealogy concepts so here is the link to what it says about all this:
http://isogg.org/wiki/Admixture_analyses

There is a blog by Davidski, the inventor of Eurogenes calculators at GEDmatch which further explains these. To quote him “One of the most important things to keep in mind is to ignore all results under 1%. These are likely to be noise. “
http://bga101.blogspot.com.au/search?updated-max=2013-11-21T17:26:00-08:00&max-results=7

Ancestry DNA has a white paper describing its ancestry composition algothim here.
http://dna.ancestry.com/resource/whitePaper/AncestryDNA-Ethnicity-White-Paper
“In the recent past, it was much more difficult and thus less common for people to migrate large distances. Because of this, it is frequently the case that the birthplace of your grandparents represents a much more ancient ancestral origin for your DNA. “

23andme says this about its ancestry compostion
“Ancestry Composition tells you what percent of your DNA comes from each of 31 populations worldwide. This analysis includes DNA you received from all of your recent ancestors, on both sides of your family. The results reflect where your ancestors lived before the widespread migrations of the past few hundred years. “
on this page
https://customercare.23andme.com/hc/en-us/articles/202906780-Ancestry-Composition-Basics

and finally what Family Tree DNA says about its ancestry composition called “MyOrigins”:
“myOrigins attempts to reduce the wild complexity of your genealogy to the major historical-genetic themes that arc through the life of our species since its emergence 100,000 years ago on the plains of Africa. Each of our 22 clusters describe a vivid and critical color on the palette from which history has drawn the brushstrokes that form the complexity that is your own genome.”
https://www.familytreedna.com/learn/ftdna/myorigins-population-clusters/

Here is what Davidski (Polako) at the Eurogenes blog says about assigning Ashkenazi to DNA results
“the Ashkenazi mainly descend from a few hundred founders, but carry Central European, Eastern European, Middle Eastern, African and probably many other admixtures, as evidenced by their genome-wide and uniparental markers.
http://bga101.blogspot.com/2012/09/eurogenes-ashkenazim-ancestry-test-files.html
UPDATE 4/17: Mind you the above post is three years old and both 23andme and ancestry have large enough databases these days that they seem to be able to predict the Ashkenazi composition fairly accurately. Both Israel Pickholtz at http://allmyforeparents.blogspot.com/2016/04/julians-father-using-ethnicity.html and I in my first post on the X have used the Ashkenazi predictions to look at more recent genealogical questions.

Hopefully the images of my brother’s ancestry were a helpful way to see the differences in ancestry predictions between the companies.