Was it close between Ankara, Turkey; Tufts in Boston; and Duke in the South? My grandmother chose Boston. She liked big cities. So my grandfather at the age of 50 had to learn a new language and to some extent relaunch his career. In Germany, much of his income was from his private practice, particularly foreign patients who paid with gold dollars. Thus the massive inflation of that time seems not to have affected our family, but he would have to rebuild his private practice in Boston.

They left in 1935 with most of their possessions. There is a lovely family story that when the official looking through the books in order to assess the emigration fee asked where all the money had gone, my Oma batted her big blue eyes and said “Och my husband asks me the same question.” She was able to negotiate that the prohibitive tax levied on Jews leaving Germany would be paid from Opa’s pension, which he could not take with him anyway. 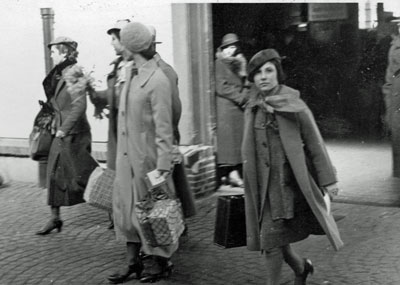 Embarking in America 1935, my mother, Gretchen, on right

So this is not a tale of hardship or of leaving the old country with very little. The crossing was quite comfortable in first class, unlike the journey of my father’s father’s family who traveled steerage from Norway in 1884 (see my grandfather’s letters for that story)

But it was difficult for my mother and her family none the less. All my life my mother told me that “They can take away your money and your land but not your degrees.” The lesson was to get a good education so as to be able to move countries as easily as my Opa did.

My grandfather was able to help many relatives leave Germany who often lived initially in the Ivy St house. But when the war was over, the truth came out about what had happened to the Jews, some of whom were our relatives. My grandfather never returned to Germany although he was offered professorships and many other honors. He had considered himself a German and had loved the cosmopolitan Munich of his youth. Now he was proud to be an American and to have nine fully American grandchildren.