The dream of every genetic genealogist is to be able to build a family tree from just DNA. 23andme made a terrific start on this with their Beta family tree released in October. Now it is out of test mode and they have added good editing facilities. Being slightly obsessive, I tried it out with almost everyone whose login I have (my family and many friends and clients).

I find it useful to fill in the names of my ancestors and the child from which my cousins are descended. On my own tree I was able to remove an incorrect generation turning a 3rd cousin into a 2nd cousin. I also like the compact display with nodes for each ancestor and the ancestors of tested relatives. Click here for an excellent and detailed help document at 23andme.

Major missing features are 1) no ability to export the tree and 2) no capability to share it with family members. Those are big drawbacks for serious genealogists like me. The other problem is that I cannot figure out how to get it to recalculate a tree although the documentation refers to that a number of times.

The family tree that 23andme builds from your DNA relatives only includes those who have opted into open sharing or those with whom you have “connected” via that button on their match page. According to the documentation there is a limit as to how many people you can have in a diagram plus the initial trees are built from your closest 20 matches. You can add people to the tree and there seems to be a provision for new relatives going into a side box and getting added from there. I did not see any cases of that.

My Norwegian Dad’s tree is completely accurate. The right side has just relatives on his mother’s tree and left his father’s. I have figured out or been in touch with all his listed matches. The only one I cannot vouch for is a woman who, based on her other family matches, has a different great grandfather from the one on record (it seems to have really been one of my grandfather’s brothers, a widower preacher in that neck of the great plains). No, I have not pursued this after no response from her to several delicately phrased emails a few years ago.

The only inconsistency is that there are several matches from Dad’s Halling great grandparents that do not show on his tree but show on mine.

My Jewish husband Steve’s tree was most interesting as it showed all his DNA relatives as being from one side which was incorrect. Possibly because Jewish people from the same geographic area, Galicia in his case, will always have some shared DNA from past cousin marriages. The key with Jewish matches is to look at segment sizes.

It may well be that most of my husband’s matches are actually from his mother’s side since many of them emigrated to America early in the 20th century. While his father had only one full sibling who came here and we know almost nothing about his father’s grandparents and whether there were any other relatives who survived the Holocaust. The one DNA relative known to be on his father’s side I was able to move over there with the editing tools. 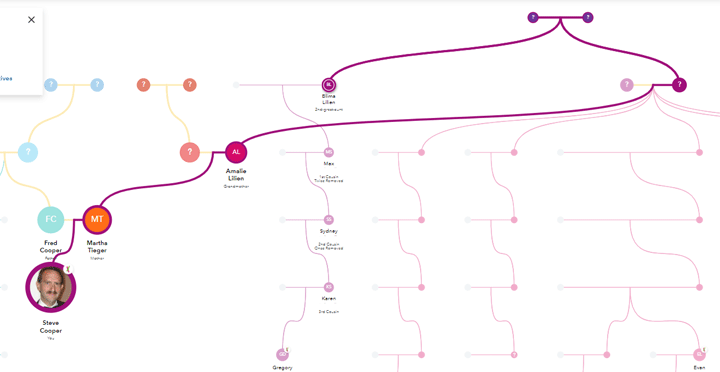 Another issue is that my husband was born when his mother was in her 40s so his age does not correspond well to his generation. Perhaps that is why the sister of his grandmother was shown one generation further back. That was easily fixed by using the “move a branch” feature.

My German born half Jewish aunt has no people in her tree on her maternal Bavarian side which is not a surprise since none of them are tested at 23andme. There are eleven people that are listed as descended from her great great grandparents who are very unlikely. I will have to go through them all. Apparently 23andme does not realize that you must share large segments to be that close a match when you are from an endogamous group. My current rule of thumb is one segment > 20 cM and another > 10 cM among several segments. So for example our newly found South African cousin, a real 2nd once removed to my aunt, shares segments that are 44 cM, 22 cM, and 3 more smaller ones. She is Sharon on the far right of the chart.

In my Aunts tree there are many false matches, only the close ones and far right ones are good

One of those unlikely ones is Leslie who shares a total 83 cM over 9 segments with the largest being 11cM and most are between 6-8cM (I excluded the X from these comparisons) so likely is related more than once and distantly. Those Langermann ancestors were from a very small town where everyone was often related to their spouse. A fellow researcher was fond of telling me that all of us Southern German Jews are related; sure enough he shares a 7 cM segment with me and my aunt!

My newly found 3rd cousin’s tree could not manage the half relationship with her half first cousins and added a generation into her tree making them 2nd cousins. Not surprising. My aunt made it into her tree but I didn’t.

An unknown father case which has long since been resolved showed nothing on his paternal side. His closest 23andme paternal matches are 2nd to 3rd cousins with whom he never “connected” and presumably they are not doing open sharing. One would think this tree feature would be useful for adoptees but so far it has not been for me, but then I get consulted on the tough cases.

Most of the trees of the non-endogamous that I looked at were very accurate except for half and double relationships.

In conclusion, this is not yet a terribly useful tool but it is fun and interesting and I look forward to it’s future improvements.

UPDATE  1- June-2020: I recalculated my brother’s tree by clicking on Info & FAQs on the top right of the tree page, then scrolling down the next FAQ page to the “I edited relationships, but I want to undo them…” (see image below). There I clicked the red button to delete my edits and recalculate. I was willing to lose the edits on his tree but not on mine. Nothing was truly lost, but all the names I had added were now in the box on the left so I had to reassign them to the correct nodes in the tree. 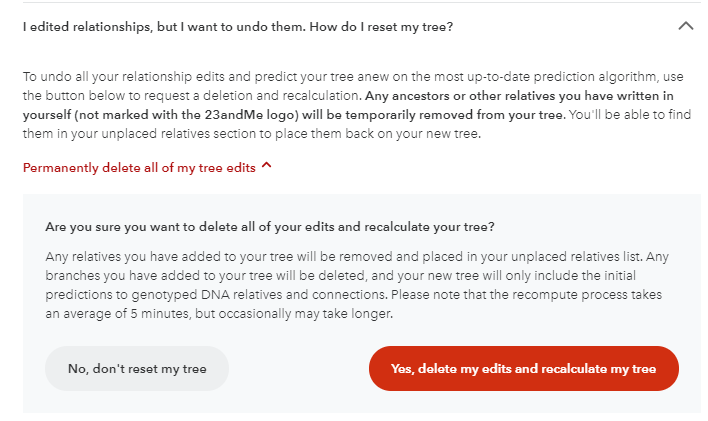 17 thoughts on “The 23andme Family Tree built from DNA”