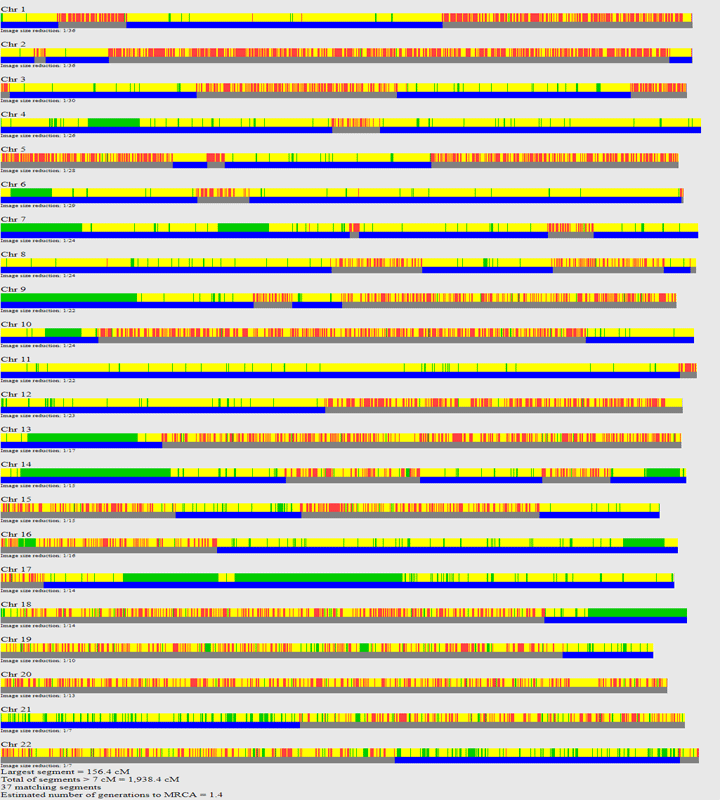 Here is what Patty told me:

“I am trying to determine if my mother’s father is her biological dad (which we have been told he isn’t). Unfortunately my mother has passed away. My mum’s brother just did a DNA test to help me. Here’s the thing, I have now found out that possibly my father is not my biological father and that my Mum’s stepfather could be. How many cMs could I expect to see from my uncle who could be my half brother as well ?” 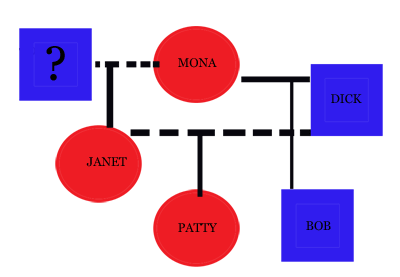 Update: How Bob is both Patty’s half brother and half uncle

Oh my! Her uncle Bob is likely both a maternal half uncle and a paternal half brother! This would certainly explain the DNA picture that we see above and those FIRs. Patty’s mother Janet is only the half sibling of Bob (different dads) while Patty shares her biological father Dick with Bob … Part of me is hoping that Dick knew he was not the biological dad when he had relations with his daughter. Needless to say this is a very difficult situation and I really feel for Patty.

I checked Patty’s kit at GEDmatch and her parents were not related. That confirms the fact that Patty’s father was not the biological dad of her mother Janet.

A half brother is expected to share about 1700cM (range: 1300-2100*) and a half uncle would be about 850cM (range:540-1172*) thus a total of about 2550cM for this relationship. However some of that will be fully identical which does not show in the totals. Also due to the randomness of DNA recombination, the amount of shared DNA can vary widely. Below are the numbers: they share 1,938 cM which works as a sum of the low ends of both ranges. Notice that there are 6 segments larger than 100 cM which is indicative of a very close family relationship.

I informed Patty that the DNA results were consistent with the expected two half relationships. Since this was such an unusual case I wanted to share these results so we could all learn from them. She gave me permission to publish this as long as no real names were mentioned. So here are the results.

46 thoughts on “An unusual relationship shown in DNA”