It is time to update my recommendations on dealing with Ashkenazi Jewish DNA, the DNA of those who are Jewish of Northern European origin, often abbreviated AJ. The usual goals of DNA testing are to find out where your ancestors were from, to find cousins who might have good family stories, to confirm your paper genealogy, and perhaps to check on health issues. There are some special considerations for AJ DNA.

First, for Ashkenzi Jews, the ethnicity results are usually not very useful as they look like this: 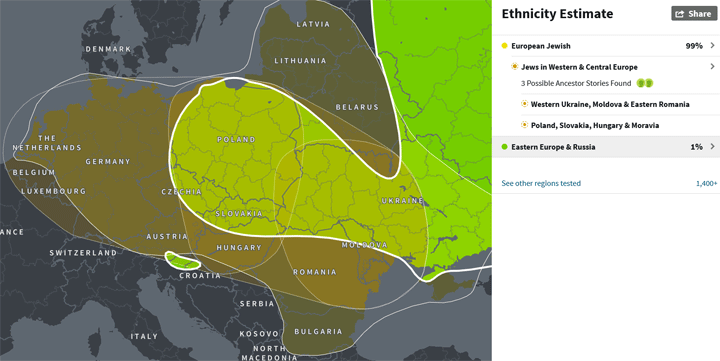 Of course for some with a larger than 2% non-Jewish percentage, it can confirm a non-Jewish ancestor.

Another deep ancestry goal for the Jewish male is to confirm or look for Cohanim or Levite roots. If your Y haplogroup belongs to one of those (see below) then best to do full Y testing over at Family Tree DNA which has projects for Levites and various Cohen groups. 23andme gives you your high level haplogroup but the other testing companies do not. If you tested elsewhere, click here and scroll end of this article to learn how to get your Y haplogroup: Why Y?. 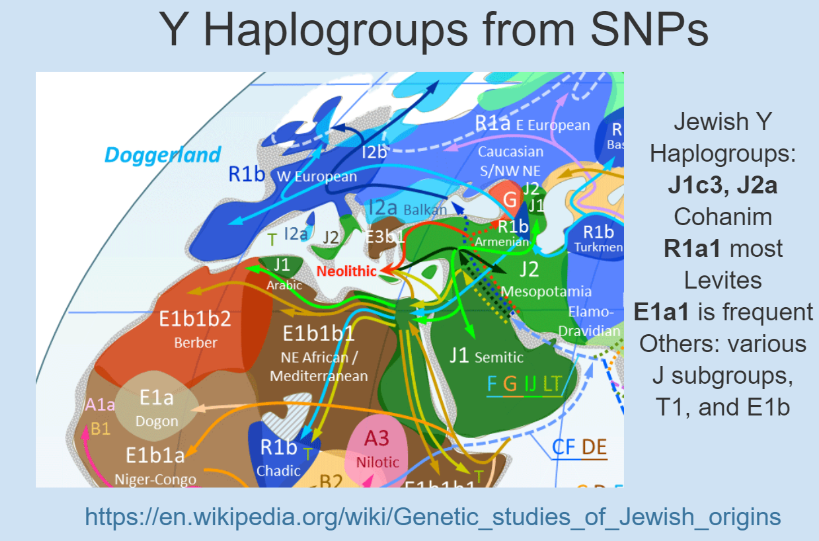 Finding relatives is difficult because all of us Ashkenazim are related multiple times, both way back when and more recently. Most AJs look like 4th or 5th cousins to each other even when that is not the case.  Cousin marriages, uncle-niece marriages, and other close family marriages abound in our trees. In my own family, on my Jewish line, my great grandmother fixed up her sister with her husband’s brother to get that dowry for the family business so I have double third cousins. Click here for my article from back in 2014 that suggested that we are all descended from 350 people in the 1300s.

In my experience, actual close relatives will always share large chunks of DNA. Therefore I have come up with the following guidelines for finding real 3rd and 4th cousins on your Jewish lines: those DNA matches with at least one segment > 20 cM and another > 10 cM among 5 or more segments.

Last Wednesday I was scheduled to give a lecture on Jewish DNA for the Jewish SIG of the Dallas Genealogical Society but I took my husband to the ER instead. Fortunately I had pre-recorded the talk. This blog post is intended to supplement that talk for them. Click here for those slides. They include my recommendations on where to test if you are Jewish. [UPDATE: Click here for the video of the talk Challenges of Endogamy: Jewish DNA testing ] 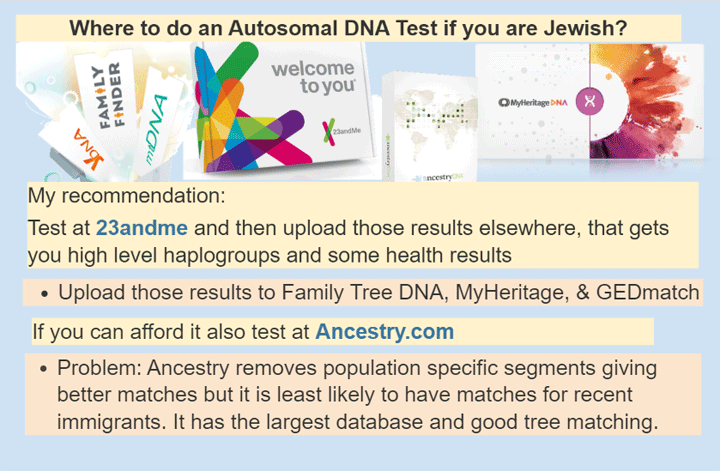 My DNA testing recommendations for Ashkenazi Jews. slide 4 in my talk

Finally, checking your DNA for possible health issues can be very important, especially for an endogamous group like Ashkenazi Jews. My husband’s LILIEN family had so much breast cancer and melanoma that it was not a surprise to discover he has a bad BRCA2 gene. His mainstream DNA tests did not pick that up, but the Color Genomics test ordered by his oncologist found it. My sleuthing determined which family line and has perhaps saved a life by getting them tested (yes breast cancer caught early enough). Blogger Lara Diamond also has a BRCA2 deletion caught by 23andme in time for her. Click here for her story.

It is a difficult time here for me due to my husband’s failing health so I am not blogging very often. UPDATE 31-jan-2022: it has been 10 months since he passed away and I am still not blogging as often as I used to… I still do many talks though, some of which are online.

At my favorite restaurant, Poseidon, with my husband in better days. Click here for more about the sign of the horns which Steve is making, Your guess as to why …

15 thoughts on “More on Ashkenazi DNA”