Going to a conference about your passion can be a really fun experience. It is wonderful to finally meet people who you have been emailing with and discussing important issues with online. Another favorite for me is the exhibit hall with vendors showing off their new and old stuff.

I had a great time at the SCGS Jamboree this year. Since I came home early, I am watching a talk streamed live about organizing my work space as I write this! The live stream is really well done. A small live image of the person is on the left and their slide is shown, much larger, on the right. Plus you can chat with the other folk watching. The live stream is available free, thanks to Ancestry.com 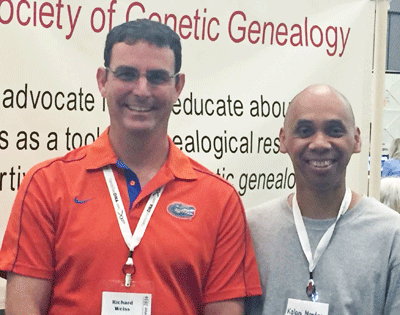 Richard and Kalani at the ISOGG booth

In order to pace myself at a conference, I try to limit myself to attending two presentations a day and spend the rest of the time schmoozing in the exhibit hall.

Two people who I have communicated extensively with online are pictured on the left in front of the ISOGG table.

Kalani Mondoy blogs about Polynesian DNA, which is tricky because it is so endogamous. His mother was adopted so he turned to DNA to find her biological family. Richard Weiss is a search angel and adoptee who is involved with DNAadoption.com including the building of their relationship calculator. Each has now found their biological families and both are Mayflower descendants!

Read on for some of my favorite snippets from the conference.

A fascination for me is how the improvements in sequencing ancient DNA are changing our understanding of the peopling of Europe; so I really enjoyed the lunch where Michael Hammer discussed this. Since there was no R1b in neolithic or mesolithic remains, the latest thinking is that the Indo-European invaders brought that haplogroup (my Dad’s) to Europe.

Diahan Southard did a nice presentation on networks, aka circles, of DNA matches as a tool for finding common ancestors that can be used in addition or instead of triangulation (my own talk). I am starting to think that having large families generation after generation may have something to do with my many successes in using triangulation (see success stories in my tag cloud on the right). My ancestors are recent immigrants to this country (late 1800s and 1935) so it is not surprising that I have no NADs at Ancestry.com

and my only circle is with a group of 3rd cousins found there with DNA. The recent Ancestry.com

update gave me one NAD that they took away on the next update. Maybe I will try working with some of my cousins’ NADs … 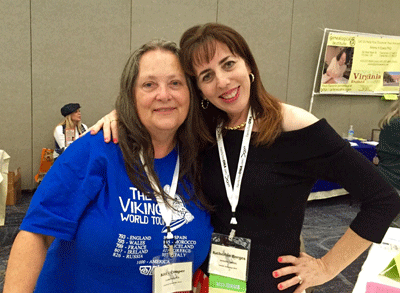 I finally learned the difference between High and Low German thanks to speaker Fritz Juengling‘s talk on German names. My mother used to put her nose in the air when she said she spoke “hochdeutsch” but in fact low German is the dialect spoken in the lowlands and high German is what they spoke in the higher lands of middle and southern Germany, so nothing to do with social status.

Another tip, this one from James Biedler,is that if a church record is very neat and all in one handwriting, it may well be a recopied version, thus might have a few errors.

One of the places I hung out during the conference was the ISOGG (International Society of Genetic Genealogists) table where I finally met Katherine Borges without whose endless energy there would be no ISOGG as we know it today. So I put a photo of us here.

Now to courageously review the DVDs of my own presentations. How many ums and errs?

A few corrections to my talks:

I gather I gave the impression that ancestry’s NADs were based on triangulated segments. That is not the case. You share DNA with at least three people in that NAD’s circle but it does not have to be on the same segment.

I saw on another blog that I had said each Y-DNA step was 100 years. No, roughly 100 years is what I said, and like most things DNA, that is not set in stone. I know of a father-son and two brothers who are two steps apart and yet my cousin has two zero step matches at 67 markers going back to an ancestor born in 1655.

The slides from my talks are available at slides.com/kittycooper and what I planned to say along with them is available in my downloads area. The DVD or just audio for each talk can be purchased from the jamboree site.

One thought on “Snippets from the SCGS Jamboree”