Many people have the illusion that if their testing company says a person is a 3rd to 5th cousin they really will be. That is not the case.

The testing companies are just making the best guess they can from the data they have. They do not seem to take segment sizes into account, rather they primarily use total shared DNA measured in centimorgans (cMs) for their relatedness estimates, usually the sum of all matching segments of 5 cM or larger. Close relatives will always share larger chunks with each other and so size does matter here.

Recently I have received numerous questions from people trying to figure out if a new match is a half sibling or a niece or a grandchild. These are hard to tell apart without testing more relatives as they all share about 25% of their DNA with each other. So I decided to collect some detailed statistics on those specific relationships with a google form (click here) that includes total segments and segment sizes for a future blog post [UPDATE as of sept 2017: First round results are written up at https://blog.kittycooper.com/2017/09/the-25-relationship-a-first-look-at-the-data/ ]

The companies predict reasonably well for close family but it is just not possible to be accurate beyond that due to the randomness of DNA inheritance. 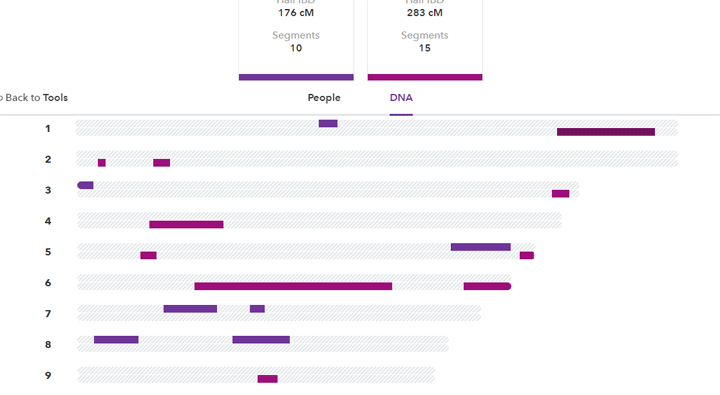 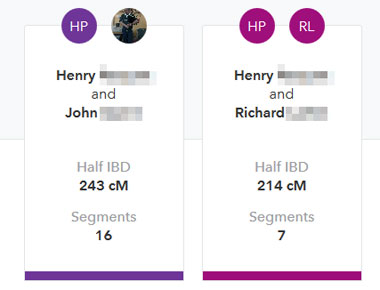 Checking my brother, I see the same effect – he has 282 cM with John versus 185 with Dick. Not surprisingly, when I look at Dad I find that he shares almost twice as much with John as with Dick. Clearly he just inherited more of the same DNA as John’s mother from their common grandparents. Conversely, he inherited less DNA shared with Dick’s mother from his other grandparents.

On the left is a comparison of my first cousin Henry with both Dick and John. The amount he shares with each 2nd cousin is practically identical, as long as you subtract the 40 cM that he shares with John on the X from the total shown by 23andme. Amazing how variable DNA inheritance can be among 2nd cousins.

END_OF_DOCUMENT_TOKEN_TO_BE_REPLACED

A long time ago I received an email from the husband of a possible cousin wondering if his wife’s WALD family was the same as our WOLD family. Naturally I suggested a DNA test and the results just came in. Yes she is a member of our WOLDs and is descended from my gg-grandfather Jørgen Oleson Wold via my g-grandmother Maren Wold’s brother Carl (Charlie) Wold. Below are the faces of four generations of my new 3rd cousin once removed’s ancestors.

END_OF_DOCUMENT_TOKEN_TO_BE_REPLACED

Since familytreeDNA added X chromosome matching to their family finder, all my favorite bloggers have been writing about how to use it. There is a list of their terrific articles at the end of this post.

Of course those of us who have many family members tested at 23andme have been working with the X chromosome for a while and have some thoughts on how useful it might or might not be.

Because our maternal line (1/2 Ashkenazi, 1/2 Bavarian Catholic) is from two different population groups, my brother and I can learn which maternal grandparent we got our X DNA from just by looking at the ancestry composition for that chromosome at 23andme:

END_OF_DOCUMENT_TOKEN_TO_BE_REPLACED

Some of my cousins and friends have tested at 23andme or familytreeDNA, due to my urging, and now they are asking me what to do next. I dedicate this post to them.

Autosomal DNA testing will not not magically find your ancestors. You will need to work at it and may have very little success if not enough of your known and unknown relatives have tested. It will give you many clues and hints about where your ancestors were from. Be sure to use some of the admix tools at GEDmatch.com on your results if that interests you, see my post on GEDmatch.

I suggest that if you are not familiar with DNA or DNA testing that you read my DNA basics page and if you have tested at 23andme also read my post on 23andme basics.

Assuming that you all do not want to spend the kind of time on this that I do (an hour or two most days for the last year); here is how to get the most for the least time input.

First you need to understand that an autosomal DNA test is nowhere near as definitive as a Y chromosome test, it can show you that you are related because you share runs of identical SNPs (referred to as segment matches from here on) with someone but not exactly how or even how close. After the 2nd cousin level the amount you will share with a relative gets more and more random. I have a few 9th cousins I share a one segment match with who like me have extensive trees and that is the closest match we have found. ISOGG has published the expected ranges of cMs and number of segments on their wiki that relatives share at different levels of relationship.

So what was your objective taking the DNA test? If it was just to satisfy your curiosity then my post on 23andme basics should answer your questions. If finding new relatives is of interest then read on.

END_OF_DOCUMENT_TOKEN_TO_BE_REPLACED

Recently I convinced several cousins to test their DNA at 23andme since the price is now only $99 – 23andme is pushing to get one million subscribers. The idea is that by having a large enough database with subscribers that answer their health and trait surveys, correlations can be found with the genes responsible. 23andme has already contributed greatly to the current knowledge of DNA using this technique. So I feel particularly good about being a part of that. Click here for the list  of correlations that they have so far.

What they do is not a complete genome sequencing, just the markers that are most likely to be different from one person to the next. Remember we share about 98.5% of our genome with chimpanzees and 99.9% with other humans. These tests use a microchip array that actually tests about .o2% of your  genome.