This is the story of how I helped a Jewish adoptee find his birth family using DNA testing. 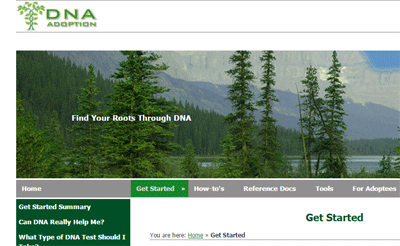 First, here is a simplified explanation of the technique that an adoptee uses to find his birth parents using DNA:

Obviously the more you know about the birth parents the easier this is. For more details on this technique see http://dnaadoption.com/index.php?page=methodology-for-autosomal-results or sign up for a class there.

Sadly these DNA search methods do not work well for adoptees from endogamous populations, such as Ashkenazi Jews (AJ) because everyone in that group shares as much DNA with each other as a 4th or 5th cousin. Even worse, most Jewish family trees stop at the grandparents or great grandparents because they do not continue across the ocean. Another problem is that even second cousins can have different Americanizations of their original surnames and let’s not forget that surnames are very recent in this population, about 1815 for most.

That is why there are so very few jewish adoptee successes, so I am celebrating this one with a blog post.

I got an inquiry from, let’s call him Roger Stein, an adoptee curious about his birth parents who matched a cousin of mine at GEDmatch. GEDmatch is a site where you can compare tests done at different companies. His story follows, with all the names changed for privacy. If you do not want the DNA details just skip to the section titled “Contact.”

Kitty,
My name is Roger Stein (Axxxxxx) and my DNA has several matches to Mxxxxxx (Kittys3rdAJcousin). I was born out of wedlock in 1950 and adopted. My mother was Jill Weiss, from Brooklyn NY. She went to Miami to complete her pregnancy and the court filings say FATHER unknown. My adoptive mother’s Aunt was an attorney in Miami and handled my adoption. Her office records were destroyed about 40 years ago.

Jill has a nephew who completed his DNA and we do have some strong matches but my paternal side is a missing.

I have some strong matches but do not have the expertise to understand how to move forward. Any help would be greatly appreciated. 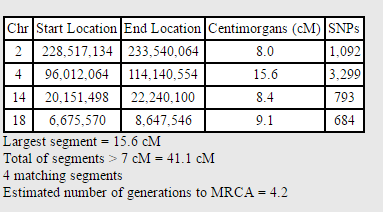 Comparison of my cousin and Roger at GEDmatch.com

Helping my relatives is something I do for free, but when I looked at the match I had to give him the bad news that it did not meet my criteria for a good AJ match to my cousin. My rule of thumb for AJ matches is there must be at least one matching segment greater than 20 cM, another larger than 10 cM, plus several more segments. I then explained that I would be happy to help him but I would have to charge him since this is my profession.

A match like this on my Norwegian side would likely be a third cousin but on the AJ side it is not significant. At best they might find ancestors from nearby villages. Since he did not match me or anyone else on the part Jewish side of my family, I knew the relationship had to be on my cousin’s paternal side. All I could tell him was that this family line was Lithuanian Jewish and it was not a match worth pursuing.

Roger had his mother’s information from his court adoption papers so he knew the name and age of his birth mother, Jill Weiss, 19, from the Bronx, Kings County, New York. Since this was notarized we assumed it was correct. Searches are a lot easier when you know one parent.

One problem with this information was that the Bronx is not in Kings county. Another was that there were about five possible girls of that name and approximate age in the New York area. An adoption “search angel” friend of his who runs https://www.findmyfamily.org had narrowed it down to the likely mother, now deceased, and her nephew Sam had done a DNA test.

Comparison of Sam and Roger at GEDmatch.com

I looked at Sam’s comparison to Roger over at GEDmatch and noticed that he was not a close enough match either. A first cousin is expected to share about 869 cM and a half first cousin about half of that (see the charts at ISOGG for expected shared DNA). This supposed nephew shared only 27 cM. So likely this was not the right Jill after all.

Next I had Roger upload his Ancestry.com

results to Family Tree DNA and test at 23andme. The advice for adoptees is to always fish in all ponds. I did not suggest a Y DNA test for him, because it rarely helps AJ adoptees, since surnames are so recent in the European Jewish population.

Roger did have a few good matches. A second cousin at Ancestry.com

, let’s call her Dora Reese, and what looked to me like a second once removed at Family Tree DNA, lets call him Bob Fox, plus several third cousins in both places who met my criteria. Neither of the second cousins had a published tree but both responded to my queries and while they did not provide trees, they did give me all their great grandparents names and dates so I could go looking. Naturally they had nothing in common with each other nor anything in common with the two good third cousin matches who were helping. Nor did any of them match each other significantly.

Now we waited for the 23andme kit to come in. Another second cousin but she did not respond. Several third cousins. No luck. But since it showed that Roger was haplogroup R1a1, the Levite group like Bob Fox, we went ahead with the Y test at family tree DNA to see if Roger was a Fox.

Meanwhile over at Ancestry.com

, I was building trees down from each set of Dora’s and Bob’s great grandparents and trying out different dads for Roger from them, trying in vain to get a DNA green leaf hint. Also I kept trying the different Jill Weisses but none of their trees generated a hint. Feeling a bit discouraged, I finally noticed an unusual surname, let’s call it Eiger, popping up in some fourth cousin trees that was a match for one set of Dora’s great grandparents. Googling that name plus Weiss found an obituary for a Jill Weiss that we had previously eliminated because she was too young.

Obituaries are wonderful because they give you the names and locations of the living. This Jill sounded like a great person and there were many facts that pointed to her (common professions, etc). From the information in the Obit, I found her daughter, let’s call her Ema, on Facebook and was startled by her strong resemblance to Roger.

Normally the adoptee does the contacting but because this was somewhat of a long shot, I volunteered to do it. I had Roger change his photo to one that looked more like him and then I sent this message on a Saturday night [somewhat edited and shortened here]:

Dear Ema,
I am a professional genetic genealogist working with a retired adoptee, born in 1950, named Roger Stein whose birth certificate lists his mother with the name Jill Weiss, born in the New York City area and father unknown. While this may not be the same Jill as your mother, some clues from his DNA testing suggest it might be. She would have been very young when this happened, too young to marry and keep the baby.

Roger is searching for his birth family in order to learn his heritage and especially his medical family history. He has no need of any financial connection and has no desire to upset anyone.

Here is what he said about himself:
“I am a graduate of [xyz] and received my Doctorate in [xyz] at the University of [xyz]. I am married and, between us, we have 4 adult children and 3 grandsons. As I am now getting older it has become increasing important to me that I obtain my biological family medical history. I need to know this for myself and my descendants. I am hopeful you will be willing to share this information with me.”

Roger grew up in a wonderful family in [xyz] who adopted him as a baby.

My email address is —- and Roger’s is —- and his cell phone number is xxx-xxx-xxxx (PST so 3 hours earlier here). You can also find him on Facebook as Roger Stein and see his picture, notice that he looks a lot like you! [url]

It would be great if you did a DNA test with Ancestry.com

or any of the main personal genome testers so we can confirm or disprove this relationship. Roger would be happy to pay for this or send you the test. I have lots more about DNA testing on my blog at http://blog.kittycooper.com/dna-testing/
Kitty Cooper

On Sunday morning I got a call from Roger. He told me that Ema’s daughter had called him and asked him what his birth date was, his place of birth and then she said,”I think you’re my uncle.” He said, “I know I am.” She then gave the phone to Ema who said “I have been searching for you for 38 years.” Yes I started crying too.

Ema is his full sister! Roger and his family have now met his Dad and brother and will meet Ema and her family in a few days. Here is the whole story.

Once upon a time a teen-aged boy and girl fell totally and completely in love. This love had unintended consequences. Both mothers insisted that 15 and 16 were too young to get married and keep the baby (it was 1949). The girl’s mother took her away to have the baby and give it up for adoption … A familiar tale?

The next part is not so familiar. When the girl turned 18, these two lovebirds got married. He joined the military and they went off to Germany for a few years. On coming back they had two more children, a boy and a girl, and they all lived happily ever after (or close to it). This couple had been married for 64 years when Jill passed away. She still grieved for the son she never knew and asked her daughter to find him … and now he is found.

Thank you everyone for all your help resolving this. Jill would be so happy.

Disclaimer: Not every detail of this search is discussed here as that would be far too long and might violate some privacy, so I included just the highlights in the hope that it might help others with their searches.

29 thoughts on “A Jewish Adoptee Finds His Birth Family”