The hardest task for many genealogists is tracking their immigrant ancestor back to his original home area in the old country in order to find records. In this article I will walk you through the process of getting across the ocean to Norway using all my favorite resources.

The newest online Norwegian archives have had a modernizing face lift but the functionality is the same as described in my 2015 post. It is the single most important site for finding your immigrant ancestor. However there are many others you would use first, to try to figure out where in Norway to look. All of Norway is not impossible with an exact birth date, but a rough location makes it easier.

One of the problems with searching for your Norwegian ancestors is the surname issue. Back in Norway, people were known by their father’s name and their farm name until the early 1900s. Plus the farm name would change when they moved. For some city dwellers a fixed surname came earlier, around the 1880s. There are a number of articles about Norwegian naming listed in my Norwegian genealogy article on the menu above (or click here). 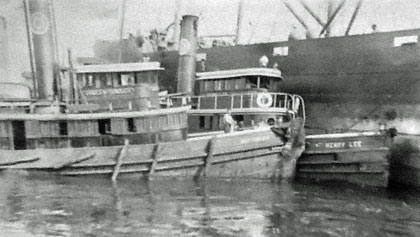 Most Norwegians picked either the farm name, a variation of the farm name, or their patronymic for their surname once in America. So although there are many Lars Olsens and Ole Hansons, there are also Tweets (from Tveit) and Challeys (from Tjelle) and Hollands (from Haaland) to name a few anglicized farm names among my cousins. One of my great-grandfathers created Wold from Torgevollen and another great-grandad created the surname Lee. How he got that from farm Skjold is a complete mystery, although family lore is that it was done so that the name would fit around a tugboat chimney.

Finding the immigration record can be key, so it is best to start at Ancestry.com

or FamilySearch or MyHeritage and locate your ancestor in the 1900, 1910, or 1920 census in order to get their year of immigration.

will often have an image of the ship’s manifest, but again the surname can fool you. My Munson family used the patronymic Andersen on that record, even though they were already using Monsen back in Christiansand. Often the husband would come first and then send for his family. My genealogist cousin Dick looked through every page for the month and year we expected and finally found all the family first names to get that record! Another tool for finding Norwegian emigrant information is http://www.norwayheritage.com/pasquest.asp and there is also the Stephen Morse immigration one step searches. If you can’t find this record move on. Your ancestor can probably still be found in the archives.

My third cousin found with DNA (you knew DNA would be in here somewhere) has an ancestor who lived in Brooklyn called Andrew Ueland, born 1869 in Norway. Now that is much easier than if he were Ole Hansen because Ueland is clearly a farm name and not such a common one. So I skipped the emigration step and checked that farm name at the online lookup form that has a database created from the Oluf Rygh books.

As you can see in the image, the farm name was only found in the Stavanger area which narrowed our search area nicely.

If you had an Ole Hansen, you need the emigration record, because the port of departure will suggest looking in all the nearby counties. For example, people from the Agders, Rogaland, and Telemark would likely leave from Kristiansand. FamilySearch has a nice map of all the counties (click here). Note that Christiana is the previous name for Oslo.

Back to Andrew Ueland, next I used the online Norwegian archives. The front page looks very confusing but in most cases you want to start by clicking the Advanced Person Search > directly under the main search box. Be sure you have the English version (top right on every page selects the language) unless you are Norwegian of course.

On the advanced person search page, there are three columns with fields you can use for searching. The image below shows only the left two columns which are all you need for now. Start by filling in just the first name and birth year then select the areas to search under Geography. You can also put a start and end year for time period. Since I found Andrew in Brooklyn in the 1900 census, I could use 1899 as the end year. 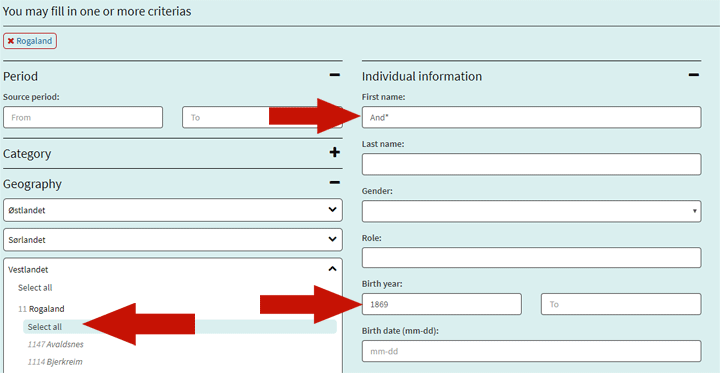 Google search informed me that Stavanger was in Rogaland (actually I knew that as I have been there). So in the left geography column,  I selected all of Rogaland within Vestlandet. Since spelling can vary widely, I typed in just the first few letters of his first name and then the wildcard asterisk. Andrew was likely Andreas or Anders back in Norway so I used And*. Naturally this got far too many results so I changed the geography to Stavanger within Rogaland. Still too many, so I added his sex male and the surname Ueland. Using a farm name for the surname will mainly fetch census records because birth records, if they are even indexed, will usually just be listed with the patronymic for the surname. 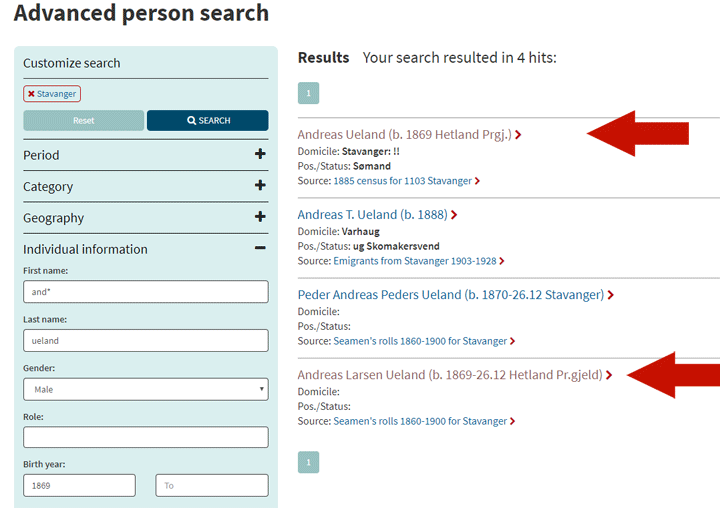 Now we are down to four results and two are born in the right year. Another helpful thing is that Norwegians traditionally named the first son for the father’s father, the first daughter for the mother’s mother, the second daughter for the father’s mother and so on. Our Andrew’s children back in the USA censuses are Berthe, Dagmar, Lawrence, and Alfred, So clicking on the Stavanger 1885 census record we see his father is Lars and mother is Berta and he was born in Hetland. This fits, although the girl’s names are out of order. One possible explanation is that they had a Dagmar who died after Berthe was born so the next girl was also named Dagmar. Another Norwegian custom was to reuse names when children die, which can confuse us American genealogists. 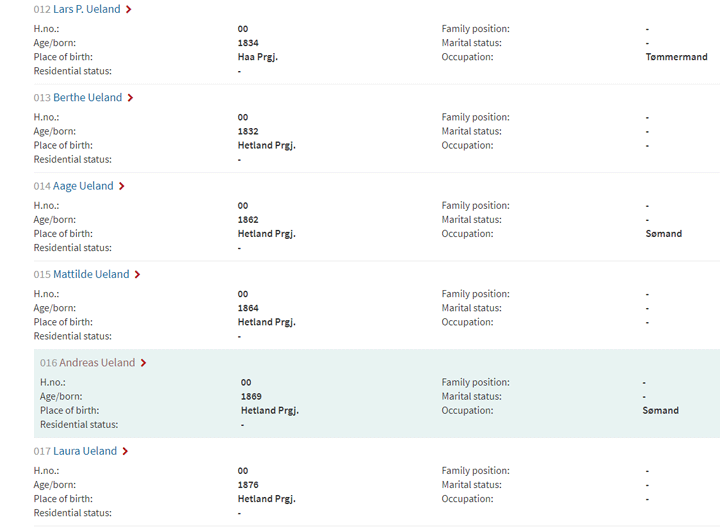 Andrew Ueland in the Stavanger 1885 census

This is probably our man but to be thorough, we want to follow up with more records. We can broaden the geography for Rogaland to include Hetland. That search found an 1875 census record for this same family on farm Ueland.

Marriage records are gold mines of information that include the parents of the bride and groom as well as places of birth. Time to try to find that record. The 1900 Brooklyn census listed his marriage year as 1890. Since his immigration date was listed as 1887 in another census, the marriage was likely in New York, probably Brooklyn. Thanks to the Italian genealogical society, there is NYC vital records index online. . 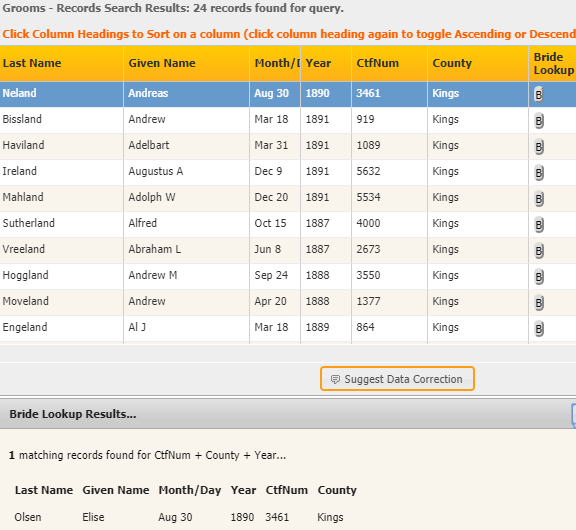 Andrew Ueland (aka Neland in the index) marriage to Elise Olsen

My first search in the grooms index failed. One thing I had noticed in various census records is that Ueland often was recorded as Meland or Neland as the script U is easy to mistake for N or M. Thus I next tried a wildcard for the Ue searching for surname *land with first initial A in Kings country from 1887 to 1891. This succeeded as shown in the image to the left.

Now I have the record number. Since marriage records frequently have exact birth dates and parents’ names, I asked a friend to have a look on their next visit to the archive.

Let’s see if the birth record for this Andreas Larson Ueland agrees with the census that says February 1869. So back to the Digital Archives front page and click on Find Source on the home page below the white search box.

Again we get a three column search page but if I show all three it is too small to read, so here are the two left columns. In the right hand column (not shown), I selected Hetland within Rogaland within Vestland. 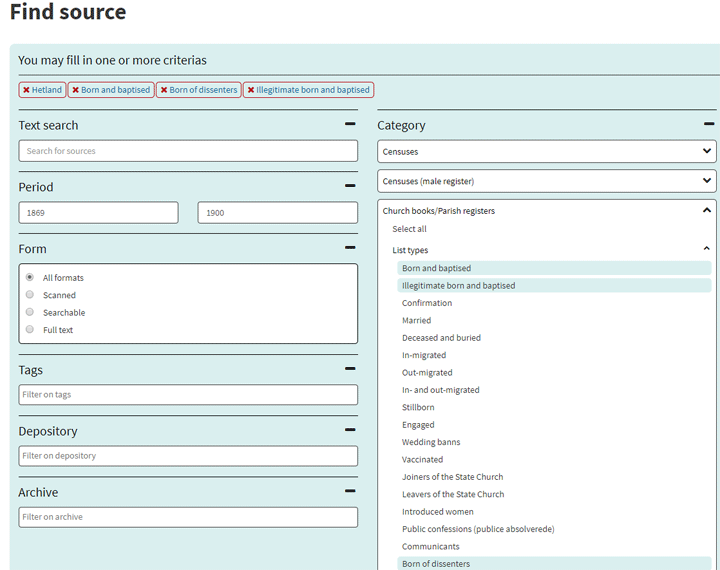 We want the churchbooks for Hetland in Rogaland that include 1869 so I selected the years from 1869 to 1900 in period far left column, then church books in center and within that category just the various births. Here is an extract from the results I got: 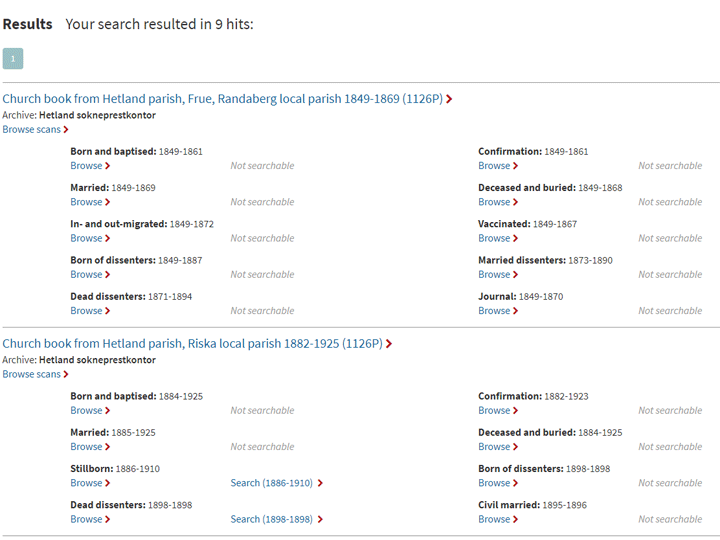 Clicking on browse underneath a source name takes us to the first page of that church book. When this is too early a year, you can use the top slider to get to the right year and then use the > to go page by page. Here is the record I found for Andreas (click on it to go to the full page at the archive) . He was born in February of 1869 as expected.

Further proof for this case will be in that marriage record and from the DNA tests of other descendants of his parents Lars and Berta, if we can find them.

Hopefully this article will help you cross the ocean and find your  immigrant ancestor back in Norway.

UPDATE: I meant to include a link to my cousin Dick’s wonderful guide to reading Norwegian churchbooks which discusses the names as well as the handwriting and so forth. Available in my downloads: Download

7 thoughts on “Finding Your Immigrant Ancestor in Norway”