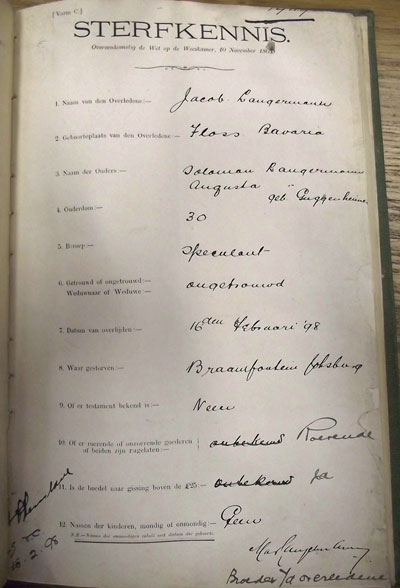 Here is what it said

I am pleased to notify you that I was able to get the following Extra
Documents.  There will be an extra fee of R60.00 per Document Type, not per
page if you would like any these.

The family story is that Jacob lost all his money in a card game and committed suicide leaving his brother Max to raise his son for him. A book about the Jews of South Africa says he died in a hunting accident. I would think that that could have been how the suicide was reported. I was expecting a cause of death in the record I got, but no luck on that. Here it is to the right. No children mentioned and he is single and only 30.

You may notice that it is not in English. I thought the language was Afrikaans but a kind helper told me no it is Dutch. This same helper, Shamira, in the Tracing the Tribe facebook group was good enough to translate it. Those translations can be found on the image at geni (click the image above). I cannot recommend strongly enough joining facebook groups for your areas of interest. Just search for the country or area plus the word “genealogy.” I have been so impressed with all the help I have seen there. 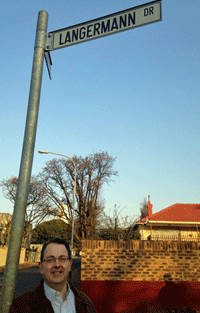 Jacob’s brother Max was extremely successful. He was one of the founders of the Johannesburg synagogue, a member of the legislature, and the developer of the suburb of Kensington. They named the main boulevard for him, Langermann Drive. Below is my brother by that street sign on his visit in 2014.

Family story is that Johannesburg grew in the other direction back then, so that was not as successful an endeavor as Max had hoped. He did bring back diamond jewelry to various family members and was much loved by his sisters. He spent some time in London and his wife Alice was supposedly British.

I think this is the book about the history of Jewish South Africa where they are mentioned: The Jews in South Africa: An Illustrated History