I have so many things to be thankful for, starting with living in a place with great weather, good friends, fresh herbs in my garden, a view, and abundant local produce. I am also very thankful for the internet and Google which have helped my genealogy research enormously. I could go on endlessly with my thanks, but this holiday makes me think of food, so today I will blog about cooking. 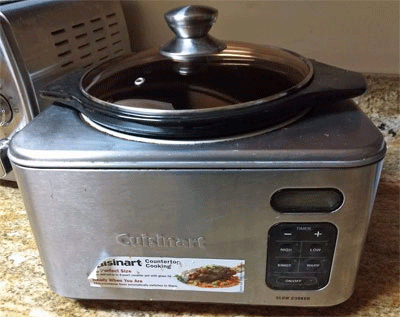 About a year ago a friend gave me her old slow cooker, as she was getting a larger one. What a great gift this has turned out to be! This is such a convenient way to make dinner, almost no stirring over a hot stove, so little time to prepare it, and so wonderful to eat. Since I work out of a home office, I can throw the ingredients together in the morning or at lunch and then forget about it. Yes I love stew.

When my cousin was visiting last weekend I started Mexican beans in the morning before I left to take her to the ocean. I called my husband on the way home and asked him to put a bag of rice on. Another convenience to be thankful for! When I got home I made some cauliflower in the microwave and grated some cheese. An excellent dinner was ready in no time.

That Mexican bean recipe was an internet find at Mom’s Kitchen Handbook (click here), no soaking the beans overnight instead you just cook them on low for a long time. Good for three meals for us. 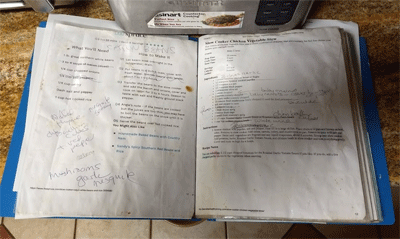 All my slow cooker recipes are from the internet. What I do is print them out, add any notes about changes I made, then if they work well, I add them to my book, one of those presentation binders with many clear pages that you can slip printouts into.

Most of the dinners that I cook in the slow cooker can feed many more people than the two of us, so I freeze up one and two person servings for another day. That way, when I am in a time crunch for a deadline I can just defrost my own cooking. Plus when I leave town, my husbands meals are all taken care of.

Warning, we have changed our diet over the last few years to be mainly plant based and full of healthful cancer fighting food (click here for Dr Li’s Eat to Beat disease website).

Here are some of my favorite slow cooker recipes:
END_OF_DOCUMENT_TOKEN_TO_BE_REPLACED

The great new features just keep coming for Ancestry‘s DNA product. Now we can click new people into our tree from a DNA match with an Ancestor hint. This can be done from the page where it shows the pathway for each of you to the common ancestor, explained in detail on the next page of this post. Hopefully you will all be careful about this, checking sources and so forth …

One thing I love about Ancestry‘s common ancestor feature is that it always uses my tree first before extrapolating from other trees and records. Yes that’s right, it uses records!

When I look at a DNA match with a common ancestor I always note the relationship in the notepad and then color code by great grandparent line. This means that when I look through my DNA matches with common ancestors, the ones not yet categorized are easy to see since they have nothing added in the right hand column, for example Susan in the diagram above.

The other approach would be to filter by “Matches you haven’t viewed” and visually scan for common ancestors since you cannot combine those filters. [UPDATE 22-Apr-2020: they can now be combined, Ancestry now has a better menu bar than the one shown above with more ways to view your matches] Personally I have too many distant cousins that I have not looked at yet, but I often use the group filter of “Close matches – 4th cousin or closer” and combine it with the sort by date. People who have just gotten their test results are more likely to be on the site and thus may respond to your message.

The problem with the latter approach is that some matches you have already viewed may have recently added some tree information and Ancestry has found a common ancestor that was not there before. Therefore it is best to add notes and/or color codes and periodically check the list of people with common ancestors for new finds.

The other day I saw a very fanciful looking match with distant cousin “A” to my VE line from Hordaland. Her ancestry was almost entirely Norwegian with a bit of Swedish so that fit. Curious about an ancestor called just “J” in her line I had to investigate.
END_OF_DOCUMENT_TOKEN_TO_BE_REPLACED

These days too many media outlets seem to go for sensationalism rather than facts, but not usually PBS. I watch their news hour every night and expect it to have thoughtful, in depth reporting, unlike the sound bites from many other news shows.

Thursday night’s piece on the privacy issues from DNA testing was a travesty. This misleading headline on their web site about that segment is not what I have come to expect from PBS – “Genetic genealogy can help solve cold cases. It can also accuse the wrong person.”

No, genetic genealogy does not put the wrong people behind bars. Autosomal DNA is just a very accurate tip that points police to a person or family. In order to make an arrest they next collect the suspect’s DNA from discarded items to see if it is a match to the crime scene DNA. It is those results they take to court, not the genetic genealogy theory.

The wrong person accused scenario that they refer to happened several years ago from using Y DNA, not the full autosomal DNA currently used by genetic genealogists. PBS interviewed Michael Usry about his experience of being suspected of a horrific murder because his Y matched the crime scene and even he suggested that it was not such a bad thing to catch murderers and rapists by using the DNA of their cousins. Click here for an article from 2015 about the Michael Usry case that explains what happened back then.

Note that the Y is only one of 46 chromosomes (in 23 pairs but Y pairs with X) and it is the only one which changes extremely slowly. Therefore can reach back many hundreds of years. For example I have a cousin who has a perfect Y match with a 5th cousin where their common ancestor lived in the 1600s. So clearly, the Y is just not useful for law enforcement searches. 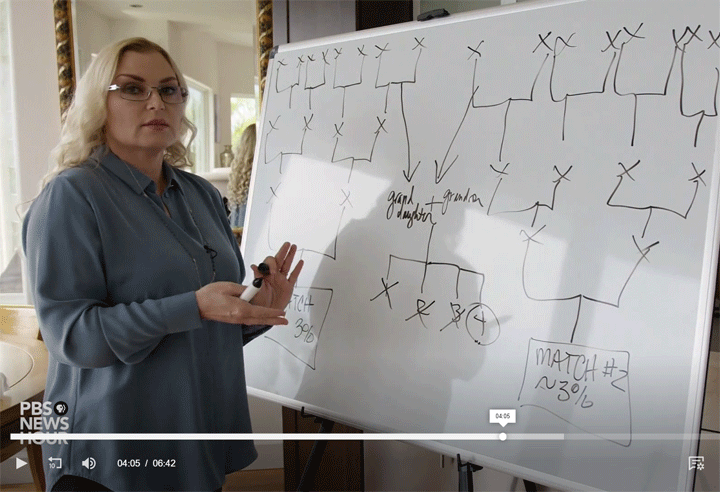 Wednesday night’s episode (click here) did a wonderful job of explaining how autosomal DNA is used to solve cold cases. PBS interviewed both famous genetic genealogist Cece Moore and Curtis Rogers, the founder of GEDmatch. I even made my husband watch it so he could better understand what I do when I help people with their DNA results. He enjoyed it.

So I was expecting Thursday’s follow up episode on genetic privacy to explain to me why so many people are worried about this issue. Personally if any of my cousins are violent criminals I am happy to out them, but I get that people did not expect this use when they uploaded to genealogy sites, so their permission is needed.

Instead Thursday’s show was highly inaccurate. So I wrote this blog post… will I cancel my PBS membership? We will see.

UPDATE 8-Nov-2019: A number of readers have pointed out the glaring innacuracy of the November 7 episode claiming “that Brian Dripps had been convicted of killing Angie Dodge and is serving a life sentence” when in fact the case has not even gone to trial yet. Although he confessed, he is now pleading not guilty. A recent non-sensationalist summary of that case is here: https://www.ishinews.com/events/unraveling-the-twisted-case-of-angie-dodge/

UPDATE 9-Nov-2019: The PBS NewsHour has corrected the Brian Dripps statement in November 7 episode on their website and also retracted the incorrect information towards the end of their November 8 episode.