database has reached a tipping point where any tester with American ancestry will get some good cousin matches. How do these help prove an ancestral line? Well when your DNA matches multiple people descended from the same ancestral line, you can have some confidence in that part of your tree. Conversely, if you have no matches on a line, there may be a problem.

On your DNA home page, the center panel summarizes your match count. It shows the number of predicted 4th cousins or closer as well as the number of starred and green leaf ancestors. You can add stars to matches for whatever reason you wish. Only you and anyone you share your DNA results with can see them. Ancestry

will indicate each DNA match that also has a tree match with you by using a green leaf.

Notice the big difference in the number of cousins between those with 19th and 20th century immigrant ancestors like my family and those with deep American ancestry. Also foreigners like my Norwegian cousin will have very few, while Jewish testers will have incredibly high numbers due to endogamy.

Click on the green View All DNA Matches button to get to your DNA matches page. Or click on the starred or green leaf matches to see just those matches. On your match list page, every DNA match who also has a matching ancestor to you in their tree is marked with a green leaf indicating a hint. 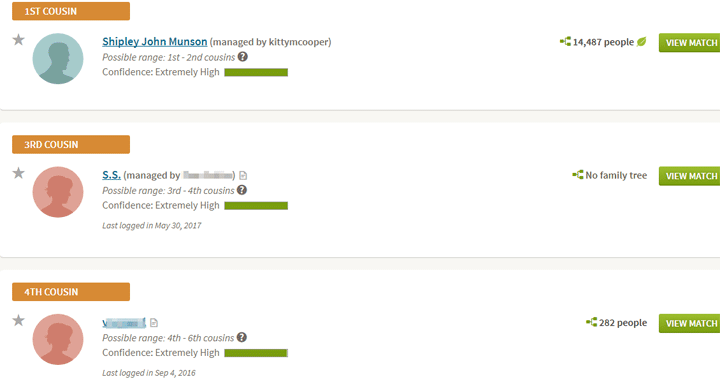 When there is a green leaf, clicking on the View Match button will take you to a page that will show you a picture of the expected relationship pathway (images of that on page 2 of this article).

Many times matches with no tree will actually have a tree that is just not connected to their DNA. You can see that on the view match page. There you can select it in the dropdown menu, as shown below, to get the usual sideways display with a surname list. Sometimes you can even figure out where they fit in from it.

do the work of checking my assumptions by adding the tentative line to the tree connected to the DNA test. I put a “??” as the suffix when I am trying out a set of ancestors so that anyone copying my tree is warned that it is a test. Strange characters in the suffix box do not seem to affect the matching. Another perhaps better solution is to make your tree private while you experiment. Or to use a second small private tree that you connect your results to when trying out a possible ancestral line. You can change what tree and who your DNA is connected to on the DNA settings page. Get there from the button with a gear on the top right of your DNA home page.

Here are some examples of my experiments.

I had thought my Beyer cousin was descended from the Beiers in the 1736 fifth wave of Schwenkfelder immmigrants (a German religious group that came to Pennsylvania). However she had no DNA matches at all on that line when I connected her ancestor David Beyer b 1763 to the parents listed for him in many trees, Andreas Beyer, born ca 1733 Germany and Philipina Weyand. By comparison, my cousin has dozens of DNA hints to people descended from David’s wife Sara Crum’s parents and their ancestors. Of course there is always the possibility that someone else fathered her ancestor David Beyer or that my cousin just inherited none of his DNA. After all he is a 4th great-grandfather which is pretty far back. However since the paper trail to Andreas was not convincing, I disconnected David from him on all my trees and added another possible set of parents. Still no DNA hint matches there though. It might help if I had more ancestors on that new potential line.

On the other hand when I connected her ancestor Robert Bleakney to a possible set of parents, James Bleakney and Mary Nolph, the matches came pouring in from both sides. There is no real paper trail for this relationship and James would have been 8 when he fathered Robert so I suspect one or both of their birth dates are wrong, probably Robert’s, since the DNA is very convincing. More research is needed. 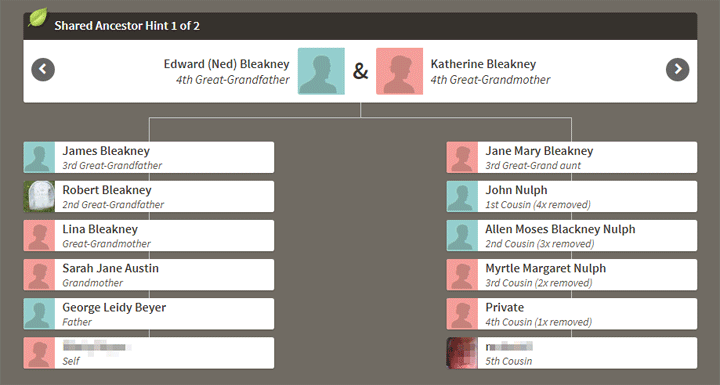 My third cousin Dave has one deep American line going back from his great grandad George Merrill. There are several men of that name in about the right time and place so I wondered if I could use Ancestry’s DNA hints to solve this puzzle. I had done my usual deal with Dave, I told him if he DNA tested, I would fill in his family tree for him. This is the only way I can afford to have so many cousins testing!

I had initially built a tentative tree for him using George E. Merrill who I had thought was his ancestor, but this got no DNA hints at all. Now I felt awful since I had told Dave he was descended from a Revolutionary War soldier on that George’s tree. So I looked again and this time tried a tree using George S. Merrill. It helps to have other people to copy from who have these folk in their trees with ancestors, although I always try and double check the sourcing.

A few days later when I got back to looking Dave’s results he had gone from a mere 5 DNA hints (we Norwegians do not have that many relatives at ancestry) to 14 hints. Somewhat amazed, I started looking through these Merrill descended matches and continued his tree back in time. Definitely this is the right George since he shares so many hints from different ancestors on this line all the way back to his 7th grandparents. 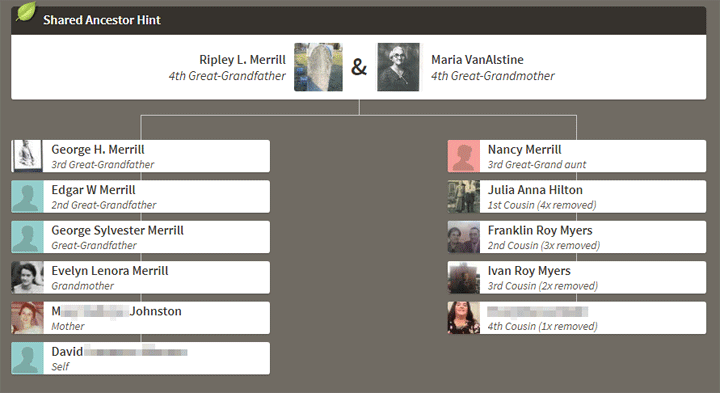 This also explains his Van Alstine New Ancestor Discovery (NAD) since George S Merrill’s great grandad married Maria VanAlstine, the sibling of that NAD. These NADs, if you have any, show beneath the 3 panels on the DNA home page. Plus Dave now has several revolutionary soldier ancestors. All is well.

Another byproduct of Ancestry

‘s powerful DNA matching, is that some people have discovered that their father or grandfather or great-grandfather is not the expected person by seeing that there were no DNA matches on that branch of the tree. Since it is always possible that no one else from that line has tested (likely with immigrants from less tested countries), it is always best to test another relative or two, who should be a match on that line, before reaching any conclusions.

Recently, a young woman was helping an adoptee who was clearly her first cousin in the DNA on her paternal side (her mother is tested). She found the adoptee’s birth mother, not a match to her. So she assumed that their dads should be brothers, but her dad had no brother. Puzzled she consulted me. I pointed out to her that she did not have a single DNA match on her Dad’s side of her tree so either he was adopted, switched at birth or not her dad. Soon thereafter she discovered that her paternal aunt had tested and did not match her at all. Thankfully her discussion about this with her mother went well and the two birth dads are now known.

Another problem I have noticed occasionally among people I work with is the tendency to confuse tree hints with DNA hints. After all they both use green leaves. But DNA hints are only on the DNA matches page not on the trees. So I encourage all of you to suggest the leaf color should be different for DNA hints. Here is the link to Ancestry

‘s powerful DNA to tree matching is a clever way to prove or disprove a family branch but be prepared for surprises. 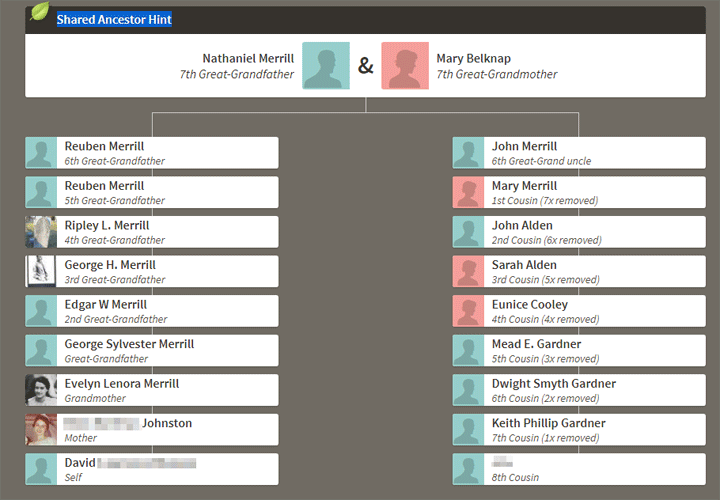 The furthest back Merrill DNA match. Most of them are from Ripley or his Dad