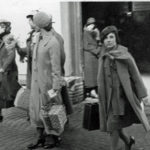 However my favorite part is where he described arriving in Brooklyn: “My first impression was naturally that of wonder at everything new and strange. It was a great adventure into new and different conditions. My second reaction was one I shared with my mother – that of disappointment at the dirt and filth in Brooklyn in the summer of 1884. Goats were walking the streets eating the paper that littered the street.” But then ” In our little Norsetown the streets were clean and in almost every house you would see potted geraniums or other flowers in the front windows. There were many poor people but they were clean and orderly, and there was no public display of poverty. I don’t remember having any language difficulty. English at the age of six came easy and naturally, but for many years we talked Norwegian at home.”

I have no idea why my Munson relatives all were such prolific writers of their experiences in this new country, but I often read and reread what I have from them posted on my family site. My aunt typed up the diary which that same grandad kept of his courtship of his wife Anna, the daughter of Norwegian emigrants. They dated by taking bicycle rides in 1900 Brooklyn. “Summer has been very pleasant so far. Have had many rides with Miss Lee to our mutual pleasure. Our ride today though, eclipsed all former ones in point of “loveliness,” The day was ideal and we were both in the best of spirits. This was a sort of “wild ride”, for leaving the boulevard, we passed over unknown roads and lanes. We passed cultivated fields and farms, and had a jolly good time.” 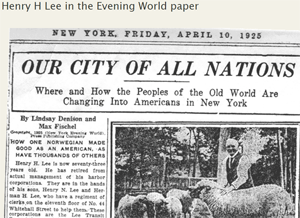 My uncle Alex inteviewed his grandad, H.H. Lee, Anna’s father, and got many details of his early life and emigration. He was a sailor from the age of fourteen until  “In 1869, when he was seventeen years old, he jumped ship in Chatham, New Brunswick, Canada, and changed his name to Henry H. Lee. He had 75 cents in his pocket. He found employment in a plant where balsam was manufactured, and then in a steamy tanning plant. The balsam was for medicinal purposes, and the tanning of raw hides was for making leather. After three years in Canada, he journeyed to New York, at the age of twenty.” [from http://kittymunson.com/index.php?page=early-american-years ]. Apparently he did not find the opportunities in Canada much better than in Norway so moved on according to a newspaper article we have (click the image for the full article).

So why did Anna’s mother come to America from Skougar near Drammen? She came with her family to Florida but hated the climate so left them to seek employment in New York according to that same newspaper article above. The records indicate that her mother stayed behind in Norway. All but one of her siblings came to America but several returned to Norway much later on. Her father also went back rather quickly, see http://kittymunson.com/index.php?page=wold-family

So I have not really answered the question of why they all came to America, it seems like it was economic reasons that brought my various Norwegian ancestors to Brooklyn. I am hoping this book gives me more insight into that as well as their lives in Norway!

11 thoughts on “Why did my Ancestors Come to America?”