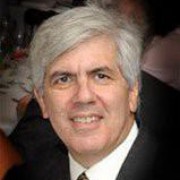 Exciting news for Jewish genealogists is the launch of Avotaynu Online, a free online resource that includes all articles from 2007–2011 published in the print and PDF version of AVOTAYNU, the International Review of Jewish Genealogy, a magazine many subscribe to.

The principal architect of this new online resource is Adam Brown, the founder of the Jewish DNA Project at Family Tree DNA and a curator at GENI.com

Their press release describes it as:

A new venture intended to stimulate collaboration among Jewish genealogists in all its forms, including conferences and meetings, DNA studies, online family trees, social networking, the development of genealogical standards suitable for the Internet age, and developments in related fields (i.e., history, law, computer science) that have an impact on Jewish genealogy. Leading participants in these areas will provide in-depth reports on events and discoveries on a regular basis.

I was very pleased to see all the articles about Jewish DNA; perhaps I will report on them in another blog post once I have read them all: http://www.avotaynuonline.com/category/collaboration/dna/

END_OF_DOCUMENT_TOKEN_TO_BE_REPLACED 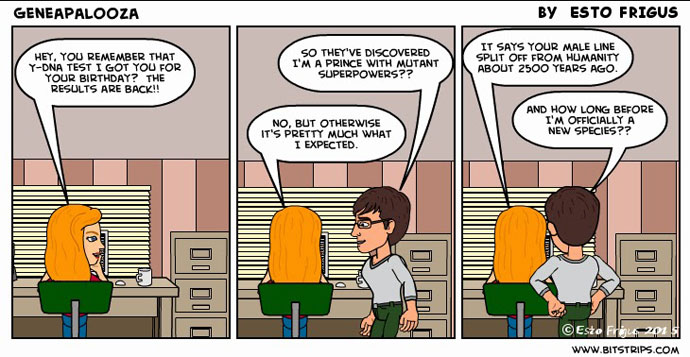 END_OF_DOCUMENT_TOKEN_TO_BE_REPLACED

How do you use autosomal DNA testing to enhance your genealogical research without having to take a PhD level course? This is a question several of my cousins have asked me, so here is my attempt to answer.

Now to the practical application of all this, using shared DNA segment data to find relatives, preferably those 3rd and 4th cousins that your family no longer knows of. Click on success stories on this blog to read about some of the cousins I have found with DNA.

When people are shown as matches to you or your relatives, the testing company will make a guess as to how closely related they are. Beyond 3rd cousins, it is not possible for them to make an accurate estimate because of the random nature of DNA inheritance.

END_OF_DOCUMENT_TOKEN_TO_BE_REPLACED

Excitement! I am visiting Norway with a cousin from June 18-26 to walk where our ancestors walked. Any Norwegian cousins I have not already contacted please get in touch if you want to meet up! I will put my exact travel plans, as they develop, at the end of this post: roughly Bergen to Etne to Bergen to Oslo to Drammen to Kristiansand … 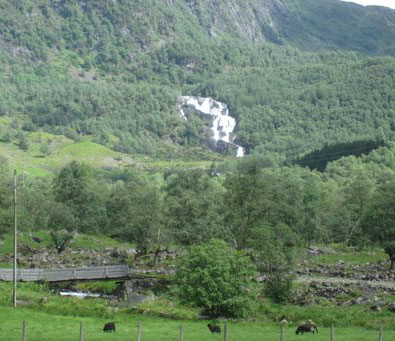 I visited Norway in the 1980s. I went to Stavanger for a tournament and I had no idea where my ancestors had lived nor did I think much about it, other than announcing proudly to my hostess that I was descended from King Harald the Finehair, according to a cousin’s research. She gave me a funny look.

Now I know that everyone in Norway is probably descended from that king who lived in 850 A.D. Various mathematicians have proven this concept (see my blog post on how many ancestors for more on that). Since Norway lost about 2/3 of its population to plague in the 1300s, I would guess that everyone who survived that, and has descendants, is an ancestor to all of us of Norwegian descent.

However after almost 20 years of doing family history research, I have learned a great deal about the farms my ancestors lived on and the lives they must have lived. Norway has these wonderful local history books, called bygedebuks, and often referred to as “farm books” which tell you much about the farm as well as everyone who lived there and how they are related. So I am making an itinerary which includes many of our ancestral farms.

Also I was lucky to have ancestors who liked to write, so I have many family stories preserved on my family history site at kittymunson.com – one of my favorites is my grandad’s story of their immigration trip from Kristiansand to Brooklyn, NY.
END_OF_DOCUMENT_TOKEN_TO_BE_REPLACED

The DNA relationship statistics listed at ISOGG are invaluable for figuring out how you are related to new DNA relatives. This diagram shown there is a big help too: 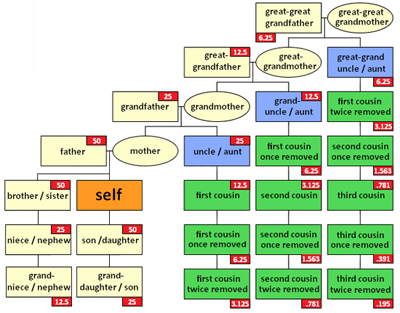 More statistics would be even better so I am delighted to make the following request.

Genetic genealogicist Blaine Bettinger has decided to collect cM numbers for known close relationships from all of us who have tested. Read about it on his blog and then contribute yours. He wants family statistics out to 3rd cousins.

Blaine explains how easy to provide those numbers if you are tested at Family Tree DNA, but 23andme includes the X in their totals which skews the results. Plus they include segments smaller than 7cM which is not what Blaine wants. So I decided to make a step-by-step how-to for 23andme statistics collection.

Better is if your 23andme or Ancestry.com

tested family members are all uploaded to GEDmatch.com. Then you can easily get the statistics there. Just run the one-to-many with the normal default of 7cM for each family kit and look in the columns Total cM and largest cM under Autosomal.