Aloha from my Hawaii cruise. Apologies to all of you for not getting any blogging or work done while at sea. My brain kept telling me I was on vacation!

One thing I like to do when cruising is to read fiction by the pool or at night. My new favorite mystery author is Nathan Dylan Goodwin who has a series about a forensic genealogist as well as a wonderful new series about a fictional genetic genealogy company called Venator.

I read the second Venator book first, The Sawtooth Slayer, which Nathan was kind enough to send me for a review. It stood up well, even though out of sequence. I then lent it to a friend who is neither a genealogist nor a DNA tester to see if it was an enjoyable read for her and others like her. She really liked it! She told me that now she is interested in doing her family history and maybe even a DNA test! So by all means give this to any friend who is interested in understanding what we do.

Next I had to get the first book, which I really liked also. The characters were particularly engaging. Then of course I started working my way through his other series, which is more genealogy based but still quite enjoyable. 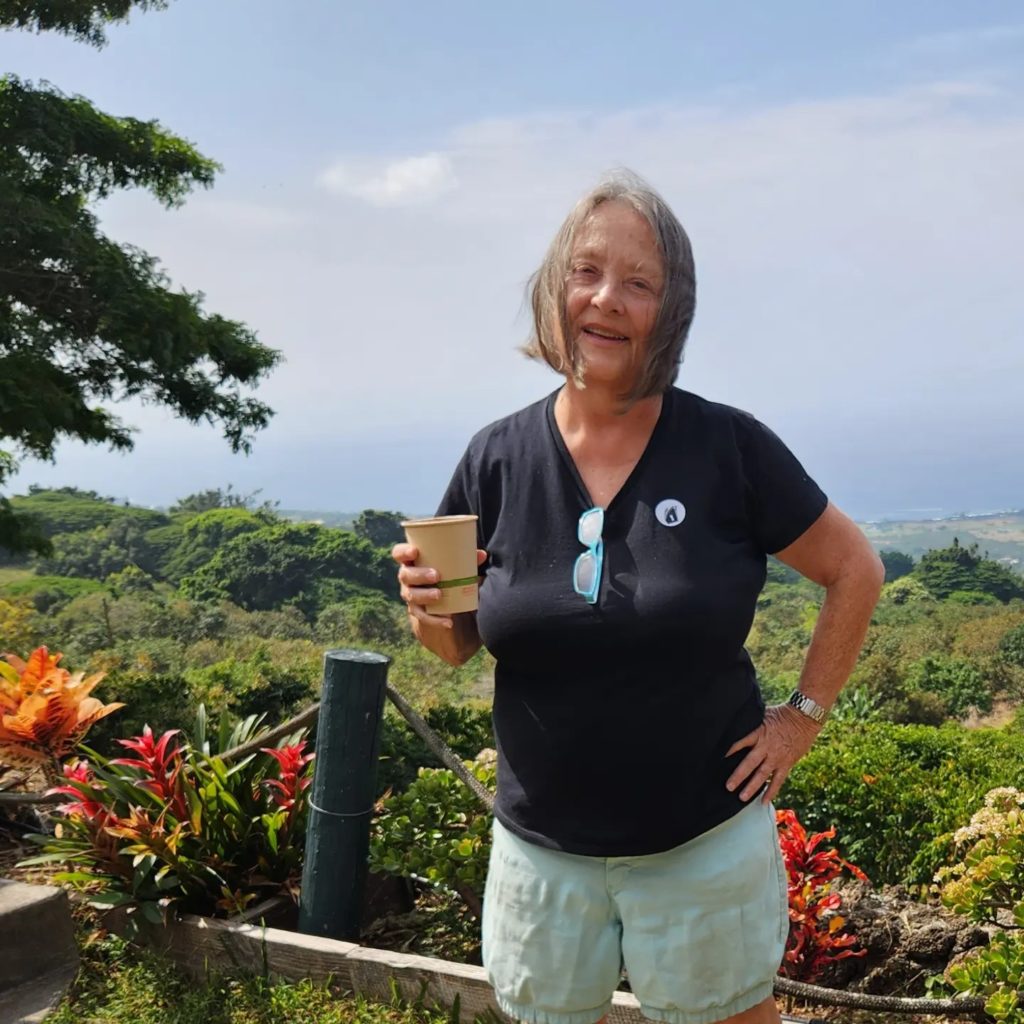 Even if you haven’t been carefully assigning sides and relationships to your DNA matches, Ancestry will now try to assign sides for you! As with the recent Sideview feature (click here for that blog post), it uses Parent 1 and Parent 2. However you can use the blue Edit Parent link to change them to Paternal and Maternal, if you can figure out from the matches or communities which is which. 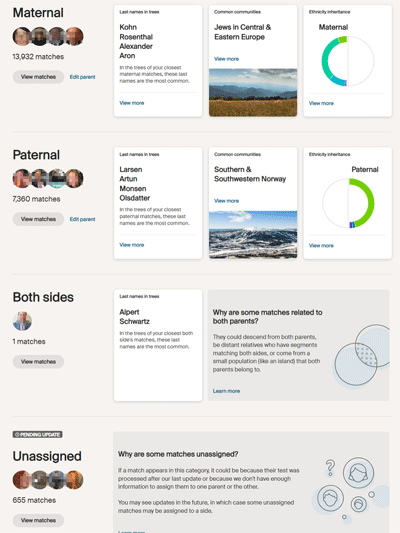 If you click on DNA Matches in the DNA menu as shown above you go to a new page like the one for my matches that I show here (click it for a larger version). It separates your matches into parent 1 and parent 2 (or maternal and paternal if you have assigned those) plus Both sides and Unassigned. Newer matches since April will always be unassigned, as well as ones it cannot figure out (click here for Ancestry’s explanation). You can see more surnames or communities by clicking on the blue View more in each panel. Clicking on All matches in the top menu bar will take you to the usual match page but now each match will have a side, both sides or unassigned listed underneath their relationship in the list. There are a few examples below. You can click on By parent to get back to this interesting new page. Clicking View matches in the first box for Parent 1 or any designation will show you your match list with matches from just that side.

I had delayed blogging about this fun feature because it was initially buggy and they took it down briefly. Also it is still in Beta test, so perhaps not everyone has it yet. Sadly there are still a few problems, so take your results with a grain of salt. Not surprisingly, people from endogamous populations are mainly out of luck with this new tool.

END_OF_DOCUMENT_TOKEN_TO_BE_REPLACED

On this date, ten years ago, I started this blog. I used to write a new post once or twice a week but I have slowed down since the death of my husband in 2020, to about once a month. At least I am still blogging.

I started this blog as a way to keep track of my own genealogy and DNA research so that I no longer needed to bombard my cousins with emails. Also I was hoping to teach them how to use DNA to assist their own genealogy research. My first post was about my Dad’s Y DNA test results.

Sample extract of my compact chromosome mapper at GEDmatch

It turned out that my articles were often helpful to others. My focus was frequently on unknown parentage. I even wrote a number of tools to assist people with that research. My most popular tool, Ahnen2GED, turns an ahnentafel list into a GEDcom. Another program, my compact chromosome browser was picked up by GEDmatch, a tools site I blog about frequently. An exciting moment for me was when a screenshot of it appeared on TV in an episode of CeCe Moore’s Genetic Genealogist

When this blog became very popular (much to my surprise), I started to be asked to give talks about genetic genealogy, first at local groups and then important conferences like RootsTech and the Southern California Genealogy Jamboree. This month I will speak about unknown parentage for the North County DNA interest group on November 19. That group is close to my heart since it was there that I first heard CeCe Moore speak in 2012 and got inspired to do more with my family’s DNA test results.

Thank you all for reading my blog. 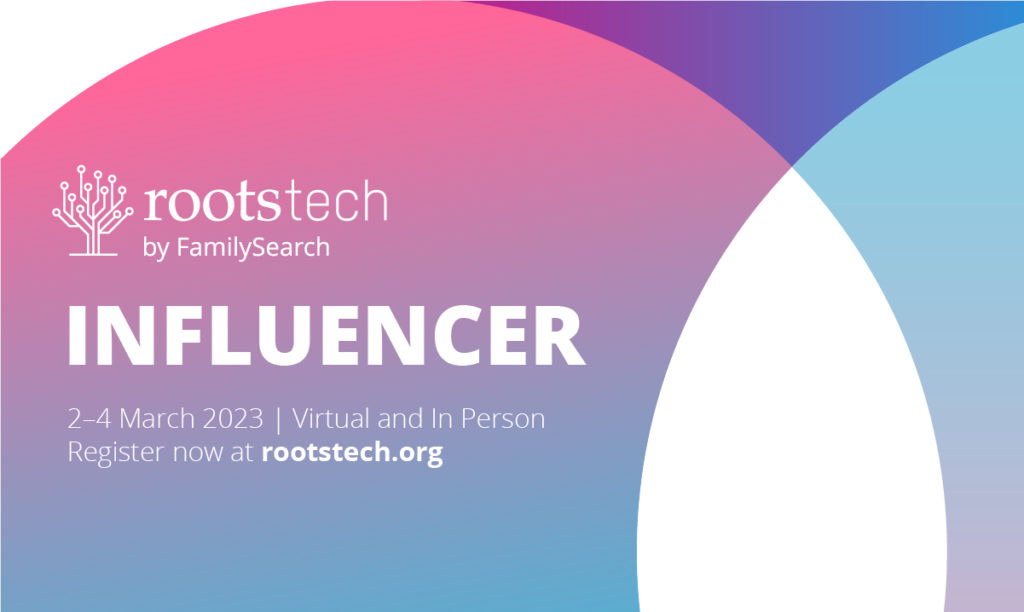 The Nobel Prize in Physiology or Medicine 2022 has been awarded to the man who figured out how to extract ancient DNA and even sequenced the Neanderthal genome with his team in 2010. According to nobelprize.org this was “for his discoveries concerning the genomes of extinct hominins and human evolution.”

Click the image below to see him discuss the implications of his work with Neanderthal DNA in his 2022 Linnaeus Lecture. 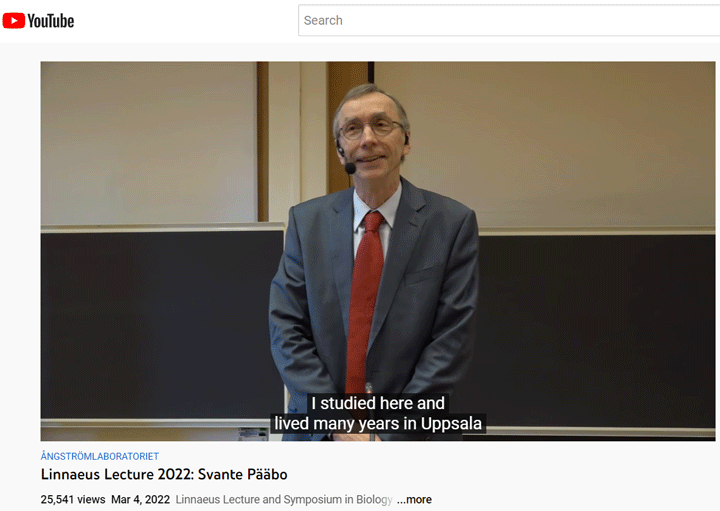 Svante Pääbo’s use of clean rooms and technology revolutionized the field of ancient DNA. Before his work it was considered impossible to get autosomal DNA from ancient remains. It was thought that one could only extract mitochondrial DNA. Click here for the Wikipedia detailed article about him.

Another wonderful resource is his autobiographical tale of sequencing the Neanderthal genome – Neanderthal Man: In Search of Lost Genomes 1st Edition.

GEDmatch.com has a wonderful free tool called Are Your Parents Related which I have previously blogged about (click here). This function looks at your raw DNA results for long stretches where you have the exact same DNA on each side of a paired chromosome, known as Runs Of Homozygosity (ROH). In other words where you got the exact same DNA from each parent. I always check this for unknown parentage cases.

When you have ROH segments, it is expected that your parents are related. However there is one other way this can happen: in very rare cases, you can get a whole or partial chromosome from only one parent. This is known as uniparental disomy (UPD).

An example of UPD on chromosome 6  from the Are Your Parents Related (AYPR) tool.

How can you tell that this is the case? Likely it is UPD when you have only one ROH segment and it is for the whole chromosome like the image above or for one arm of a chromosome (from or up to the centromere). In the less than one hundred cases I have looked at, I have seen UPD only twice. Once a whole chromosome as shown above and once the long arm of chromosome 14.

UPD can result in some dangerous medical conditions as per Science Direct (click here). Please see a professional genetic councilor if you suspect you have this.
END_OF_DOCUMENT_TOKEN_TO_BE_REPLACED