When I first started playing with clustering of my Ancestry DNA matches long ago, I found a group of presumed relatives descended from one Thorkhild Westbye of South Imjelt farm in Skougar, Vestfold. These people were not known to be my relatives, so something in my documented tree or their tree was likely incorrect. It so happens that my great great grandad Jørgen Wold, father of my great grandmother Maren Wold Lee, was the foreman on that farm. 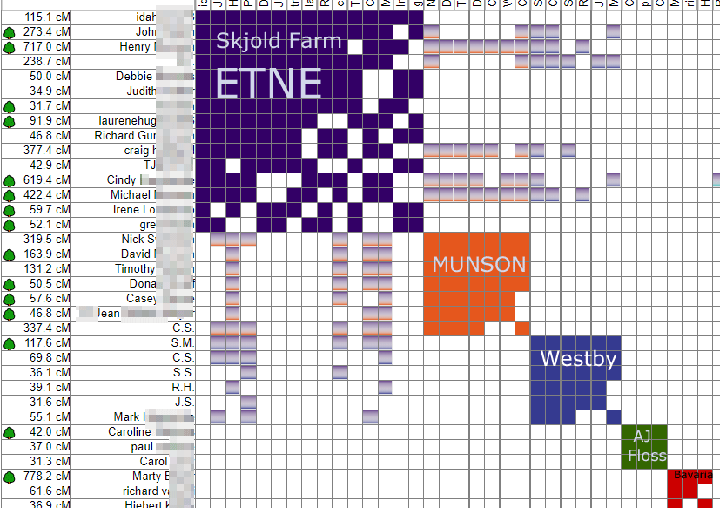 My Ancestry DNA clusters from long ago – Added naming is mine

I blogged about the mystery of our DNA matches to the Westby(e) family a while back (click here) and my theory that Jorgen’s father was a Westbye, not the father of record. One of my action items was to find a male line Westbye who would test his Y, since that chromosome passes almost unchanged from father to son (click here for more about the Y) and can be used for deeper ancestry and paternal lines. Autosomal DNA is accurate for close matches but cannot distinguish in this case: between a half third and a half fourth cousin.

If the Y DNA were to match my Wold male line cousin Mike, who has tested, this would help confirm that Jorgen’s father is the Westbye and he and Thorkhild are half brothers. Looking at their eyes in the picture below, they could easily be closely related. If the Y does not match, then likely Torkhild Westbye was my great grandmother Maren’s father, not Jørgen. This would mean that our small matches to Jorgen’s mother’s side could be from some other further back ancestor. Although a failure to have a Y match could also indicate some other break in the line, so I would need more testers …

After much searching of family trees on Ancestry I was unable to find a male Westbye in America to test. However the tree at GENI provided me with a number of Norwegian relatives, one of whom has a great tree at MyHeritage. Thus I was able to contact him.

The problem was that he was not interested in DNA testing. He said

“My reluctance to do the DNA test comes from the fact that I feel I know what I need to know about my ancestry already. It’s very dull. They are all Norwegians… Also, sites like MyHeritage have been hacked in the past and I don’t like the notion of my entire DNA being freely available to a potential hacker or government agency of one sort or another.”

to which I responded

“Thanks to DNA testing I am now in touch with many wonderful 3rd and 4th Norwegian cousins that I would not have known otherwise. So help with my genealogy is the reason I do it.”

I probably should have said if a government agency wants your DNA, they can get it from your garbage and what use is your DNA to a hacker? It is not your money and it is only about .02% of your DNA that is tested.

At least he sent me the email addresses for his brother and cousin, two other male line Westbye descendants, so I can ask them to test and will include a link to this article in that email!

4 thoughts on “The Westbye Mystery: Finding a Y Tester”