UPDATE 13 DEC 2020- the archives have a new look and new site at: https://www.digitalarkivet.no/en/

Finn of course made it look easy with his examples of searching. He promises to have his presentation posted at his website [UPDATE 13-DEC-2020: site no longer available] 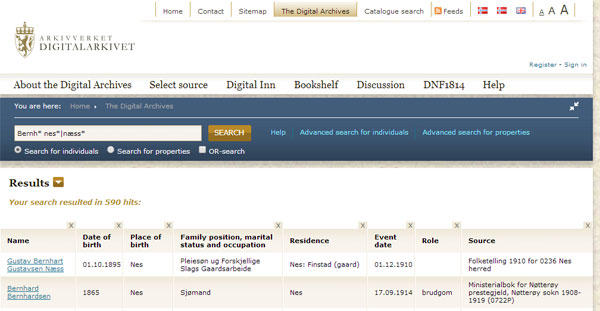 But when I tried to find one of my own ancestors I did not do so well. I tried O* Gabrielsen and had no results but when I did just Gabrielsen there were hundreds of course and plenty started with an O. So I still do not understand how to use the search. I also tried this in the advanced search page with the same results.

UPDATE: I saw him in the  library tonight and he explained that you need at least TWO letters with your wildcard. Now it works!

He was full of other good tips about Norwegian records. Here are a few of my favorites

The main tip when working with the Advanced search is to keep refining it. For example, not so many records have the place of birth so he moved the farm name to the residence box and got more results.

Another time he removed the last name and put in the birth year and got better results. So keep fiddling with it!

It was a wonderful first day at Rootstech. I met many people I had corresponded with or heard of and was pleasantly surprised by how many knew of me and this blog! More soon.

4 thoughts on “Searching the Norwegian Digital Archives, a Rootstech Talk”