Finally! The video of the GEDmatch basics talk I did on May 26 for Verogen is now available. Best to view it full screen at youtube in order to see the images well.

GEDmatch, a DNA tools site, was originally created to compare GEDCOMs, a function you can still use it for. A GEDCOM is a plain text file of your family tree formatted so that any genealogy program can understand it. Click here for the wikipedia entry explaining this in more detail.

In my talk I emphasized that it is best to upload a privatized GEDCOM with no more than 10 generations of ancestors then connect it to the DNA test for that person. This will help you use the relative matching tools. I promised in the presentation to explain how to create a GEDCOM. So here are a few of the many ways.

END_OF_DOCUMENT_TOKEN_TO_BE_REPLACED

GEDmatch.com is about to get a face lift. Many have complained that it is not intuitive and does not offer enough help for a newcomer. The new site hopes to correct some of that; I am helping with the beta test now; it sure is prettier! 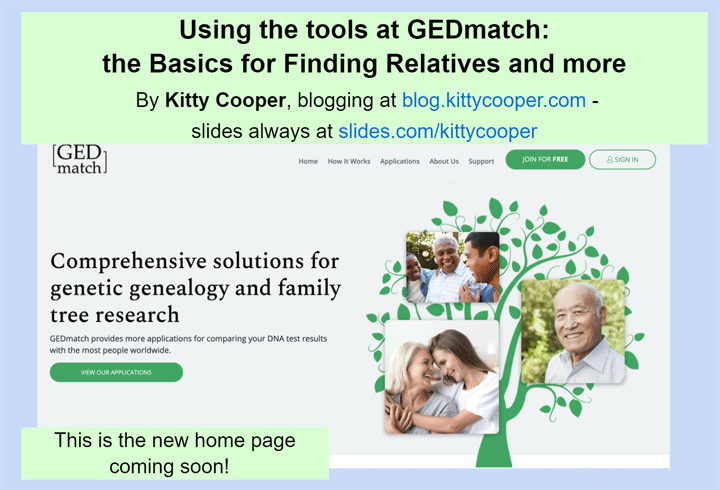 Why use GEDmatch and what is it? Well it’s a free 3rd party site of tools where you can upload your DNA test results and compare them with those from people who have tested at other companies. Plus there are many analysis tools, some available nowhere else. These include GEDCOM (family tree) comparisons, including yours to your DNA matches.

Recently I gave a talk for the Family History Fanatics at their Winter of DNA conference where I demonstrated how to use GEDmatch without worrying about segments. An approach that gets a lot out of the site without having to be a geek like me. The slides are here: https://slides.com/kittycooper/gedmatch-basics-2021 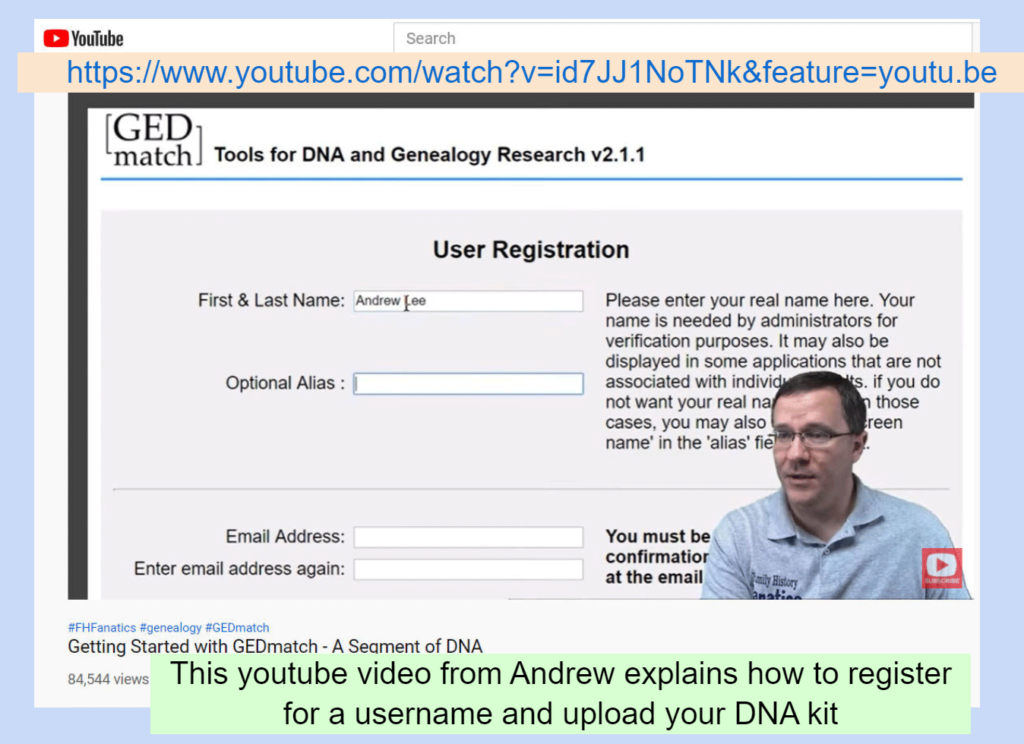 Click the image above to go to the video from Andrew Lee, of FHF, which shows you how to create a user id and upload your DNA raw data to GEDmatch.

Or read this blog post of mine which also has links to my other GEDmatch posts
https://blog.kittycooper.com/2019/02/genesis-basics-gedmatch-reinvented-part-1/

2. Once Logged in, your Dashboard Page is not Intuitive

The tools are in the right hand column and the resources you have uploaded are listed on the left. You can upload more than one DNA kit and multiple GEDCOMs. There is a help section on the top right.

This post from Jim Bartlett is a useful explanation of the home page, as is my basics post listed above.
https://segmentology.org/2018/05/01/first-time-at-gedmatch/

And here is what my beta test Dashboard looks like, an improvement? I think so. 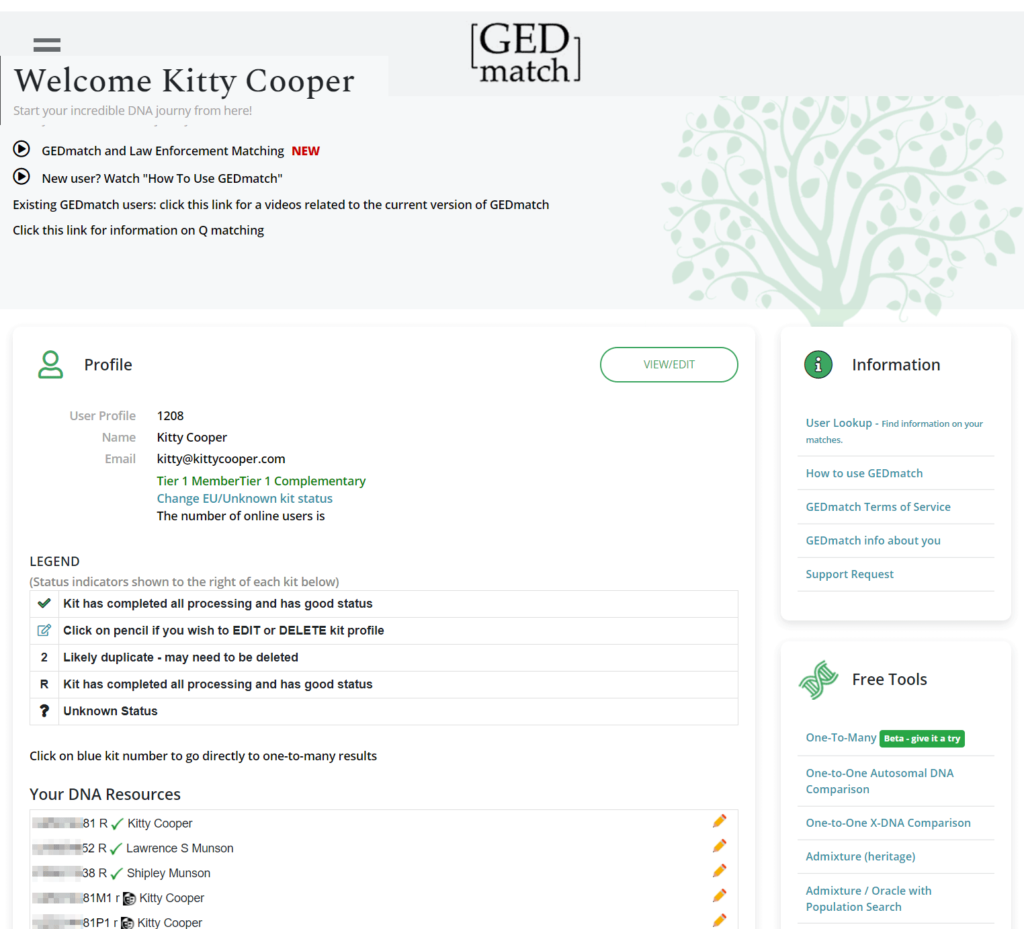 END_OF_DOCUMENT_TOKEN_TO_BE_REPLACED

I will be doing a talk on GEDmatch Basics for the Family History Fanatics (FHF) Winter DNA Conference. UPDATE: 25 Jan 2021: I have received screen shots of the new look coming soon to GEDmatch; these will be featured in my presentation.

KICK OFF THE YEAR RIGHT

Saturday, 30 January 2021 beginning at 9:45 AM Eastern Time.
If you can’t attend the event during the live sessions, you’ll have access to the replay for 30 days. 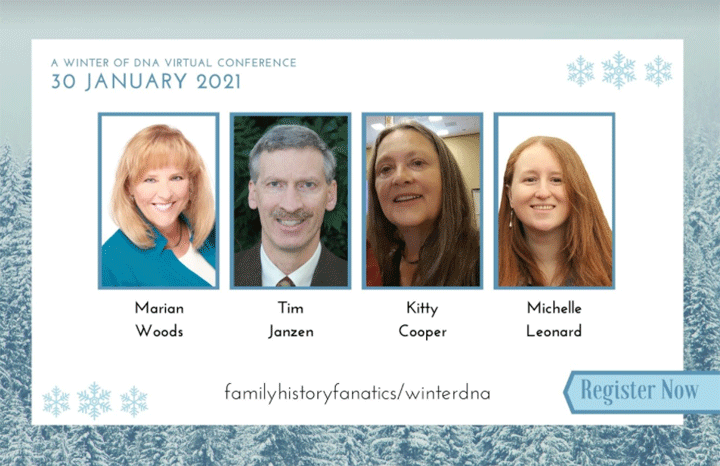 The four panelists will return for a “test your knowledge’ competition and then more of your unscripted rapid-fire questions.

When you register, you’ll be entered to win genetic genealogy-related door prizes.

Family History Fanatics is a genealogy education company that is focused on putting the fun into online learning. See the difference the FHF Group puts together for you.

UPDATE: 13-Dec-2020: FIXED! The code had not changed but the environment had, so an initialization was different. Thus my analysis that it was always the first few chromosomes helped the programmer solve the issue.

The “Are Your Parents Related Tool” (AYPR) has been an enormous aid to those adoptees who discover that they were a result of an in-family relationship. Thus it is very distressing to have gotten a report from a reader that the tool is suddenly showing less cM that are ROH than it used to.

My investigation has shown that the first few chromosomes have segments that are not marked as ROH when they should be and were in previous versions. The programmer who can fix this told me that this bug goes back perhaps as far as this past summer He does have a working copy from July, but is in the middle of a major new project. Thus he may not be able to attend to this until later this coming week,

In the meantime, here is an example of how this looks so you can try to make your own estimate. The results for a child of first cousins was shown in my blog post about this tool (click here for that post).

To the left is how that looks now, while on the right is how it looked last year. Notice that the first three chromosomes on the left have not been included in the ROH listing. Also, the previous total was 215.3 which, when multiplied by 4, fit the first cousin scenario, now confirmed. The total without those first few chromosomes today is 126.8.

The cases from closer relations are even further off. A child of siblings had 744cM ROH last year but now gets only 465.6. A child from a father daughter pairing was was 750.4 and is now 547.9. In both cases the problem was the first four or five chromosomes were not having their ROH segments counted any more.

Let’s look at the rest of the columns for my Dad’s top match. Clicking the tree icon would take you to the user profile information. The cM shared are listed next; 40.3 is match that can be anything from a 4th to an 8th or even more distant cousin. Then the name of the possible shared ancestor, first in my GEDCOM and then in my match’s GEDCOM; either one can be clicked on to go to that person’s tree entry. The 8G is how many steps down from that ancestor my Dad is. If you click that, you see a descendant list from that ancestor in your tree. Notice that his match is also 8 steps down, so in the same generation. Subtract one to get the cousin level so this is a 7th cousin.
END_OF_DOCUMENT_TOKEN_TO_BE_REPLACED