‘s genetic communities are a good way to understand your family’s journey for the last few hundred years. Unlike the ancestry composition percentages, these communities are more recent and include a write up of the history of each group starting in 1700.

Many of my favorite bloggers posted about this yesterday. If you want to understand something about the science which combines the use of trees plus good sized matching segments, I recommend Leah Larkin’s analysis of Ancestry.com

Since I frequently work with adoptees, I am really hoping this helps with that analysis. I am finding that people with deep American roots have far more communities than those of us with recent immigrant ancestors. The adoptee I am currently working with has six communities! Shown above.

He knows his mother’s father and that is the Deep South community. I suspect that the New Jersey and. Pennsylvania groups are from his Dad, based on other matches at Family Tree DNA. I will report back if this new feature helps for his case.

The reason this may be helpful with adoptees is the ability  to separate matches into the different communities. Clicking on a specific community name gets you to a page with a map for that group and its history stories. There is an icon called Connection at the top left of the page (my red arrow in the image example to the left). Clicking it takes you to a page with information about your connections.

This connection page shows you how much confidence Ancestry.com

has that you belong to this community, lists the common surnames, and has a green button to click called View All Matches. (Yes I have a cousin related to the Ferris who designed the first such wheel). 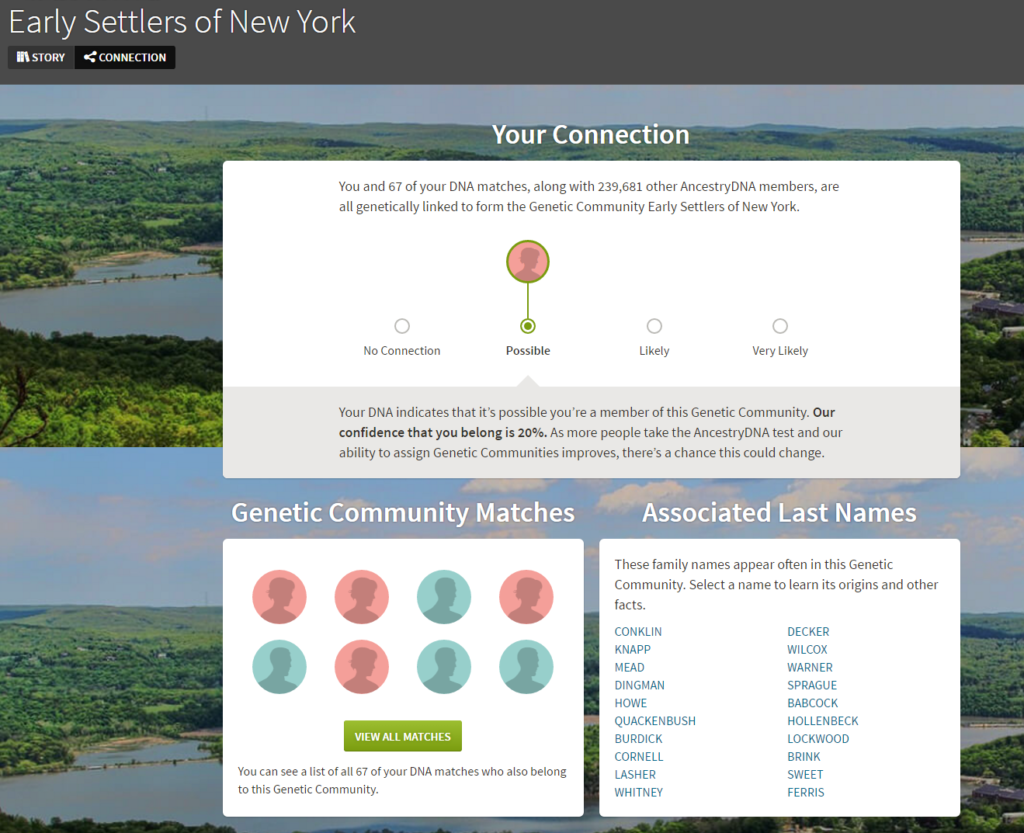 Clicking View All Matches takes you to your usual match page but with this community as a filter. This may be quite useful. However when I clicked on a green leaf match from that early settlers of New York page, I found a known Swedish match for my cousin. Perhaps that is not the correct ancestor for their common DNA or perhaps that match just happens to also share this community. 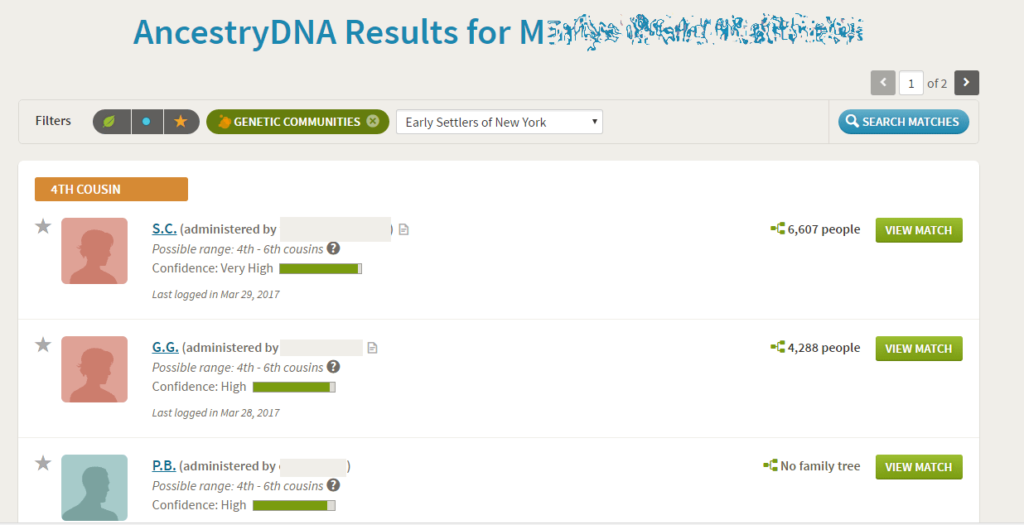 Most of my close family have just one or sometimes two communities, probably due to less foreign testers since we descend from fairly recent immigrants.

My 100% Scandinavian cousin JM has only one, Eastern Norwegians., many of them came before the the civil war. My brother also has only one, Western Norwegians, our paternal side which emigrated after the Civil War. He did not get the Jewish Community that our maternal side first cousin got, shown below, presumably because he has less jewish DNA than she does.

The community page also has history stories divided into 25 year increments. Here is the German Jewish story which applies to our family who came in 1935. One problem with the people from our tree assigned to this group on the story page is that many of them are German Catholics but as they have no other descendants tested here,  they are lumped in with my German Jewish group.

I was surprised by how nicely the jewish communities are presented. I have been steering my jewish relatives to test at Family Tree DNA or 23andMe since those both have large groups of jewish testers. Also the algorithm change (timber) that removed population specific matching segments, moved almost all my brother’s 4th cousin jewish matches into the distant cousin range, probably correctly. This might also explain his lack of membership in the german jewish community.

So here are some screen shots from the jewish communities for the adoptee whose case I solved.

Here is the promised list of other blogger’s posts about this Genetic Communities feature.

8 thoughts on “Genetic Communities at Ancestry are live”