There is a Valentine’s Day Sale at 23andme.com for American users, $20 off for up to two kits until Feb. 14 which brings down the price for the ancestry only version to $79, more in line with the other companies. 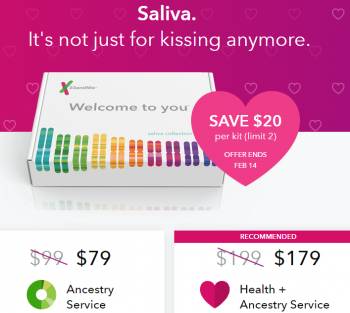 In other news, rumor has it that non-American users will finally be transitioned to the new experience in the next few months. If anyone from 23andme is at Rootstech this week, I will ask for more specifics on that.

Meanwhile there are several new features at 23andme for those of us, Americans, on the new experience:

Click the read more for the details on these. I confess, I am at Rootstech right now, so not there is not much time to write about these in depth, just a few thoughts and images. 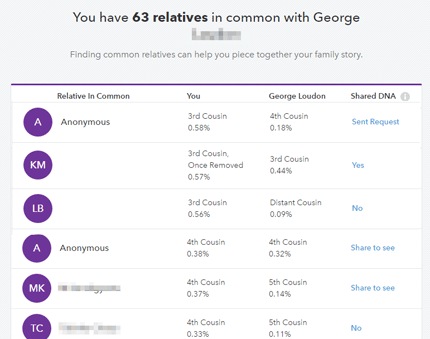 Notice that you can send a share request even to those anonymous matches (“Share to see”) and the ones you have already sent requests to show as “Sent Request.”

The other new feature is an attempt to show where on your ancestral timeline ancestors of specific ethnicity would have lived. The problem with this is that the less DNA you share with that ancestor, the more difficult it is to assign such a time line.

Click on “ancestry composition page” on your 23andme reports page and scroll down to see the new timeline feature. Here is an useful point about it from the 23andme blog at https://blog.23andme.com/23andme-and-you/23andmes-new-ancestry-timeline/

“An important caveat of the Ancestry Timeline feature is that it assumes that your ancestry from each population originally comes from a single (recent or distant) ancestor. It also says nothing about where a particular ancestor was born—only their genetics. Therefore, a British & Irish ancestor born in Philadelphia would look the same as one born in Dublin.”

To that I would add that when you see just a single segment on your ancestry chromosome painting that matches a specific population, the time when that ancestor lived could be much older than indicated, since the inheritance of those single segments is quite random.

My father is 100% Norwegian. Or so I thought before I started doing genealogy. Now I know he had a German engineer for a 4th grandad. Dad’s British and Irish is listed as 9.8% but to our knowledge he has no ancestors from there although his Viking ancestors did a lot of visiting. However there are one or two unknown ancestors back in the 1700s. So perhaps one or two of them were British or perhaps this comes from that German ancestor or perhaps the admix technology is just not that good yet.

Dad’s 2% Finnish is interesting because that is a very distinct population so it is likely real. Dad has two large Finnish segments in the chromosome painting. I got one and my brother the other, bigger, one. See how that is shown below, my brother’s Finnish is listed as a little more recent than mine but we know it is the same ancestor and why is Dad’s same Finnish ancestor further back? Not a very good feature yet …

The South Asian is less than 1% so a very doubtful piece on chromosome 6 in the painting except that my brother inherited it.

As to the other ethnicities for me and my brother, our mother was born in Munich. We know she was half Jewish and half Bavarian. My brother got more of the Bavarian. Armed with that have a look at our timelines and draw your own conclusions. I have a talk to go to …

3 thoughts on “23andMe News: A Sale and New Features”