UPDATE: 13-Dec-2020: FIXED! The code had not changed but the environment had, so an initialization was different. Thus my analysis that it was always the first few chromosomes helped the programmer solve the issue.

The “Are Your Parents Related Tool” (AYPR) has been an enormous aid to those adoptees who discover that they were a result of an in-family relationship. Thus it is very distressing to have gotten a report from a reader that the tool is suddenly showing less cM that are ROH than it used to.

My investigation has shown that the first few chromosomes have segments that are not marked as ROH when they should be and were in previous versions. The programmer who can fix this told me that this bug goes back perhaps as far as this past summer He does have a working copy from July, but is in the middle of a major new project. Thus he may not be able to attend to this until later this coming week,

In the meantime, here is an example of how this looks so you can try to make your own estimate. The results for a child of first cousins was shown in my blog post about this tool (click here for that post).

To the left is how that looks now, while on the right is how it looked last year. Notice that the first three chromosomes on the left have not been included in the ROH listing. Also, the previous total was 215.3 which, when multiplied by 4, fit the first cousin scenario, now confirmed. The total without those first few chromosomes today is 126.8.

The cases from closer relations are even further off. A child of siblings had 744cM ROH last year but now gets only 465.6. A child from a father daughter pairing was was 750.4 and is now 547.9. In both cases the problem was the first four or five chromosomes were not having their ROH segments counted any more. 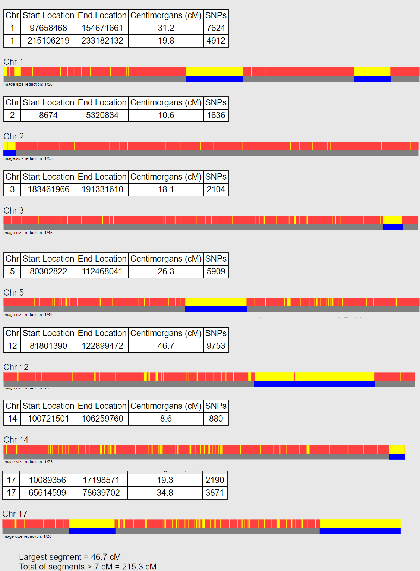