A recent email informed me that my brother and I had a DNA connection to A.J.Jacobs, the writer and Esquire editor who read the whole Encyclopedia and lived a biblical year among other creative endeavors. Having had dinner with this fascinating fellow at my brother’s house during the last Rootstech, I was extremely pleased. 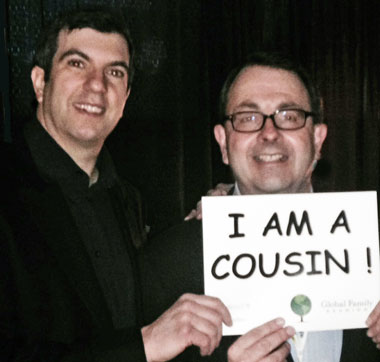 A.J. Jacobs with my brother Shipley at Rootstech 2015

A.J.’s latest mission is pursuing the fact that we are all related, by throwing the biggest family reunion ever on June 6. This is sponsored by most of the major genealogical companies and is a fund raiser for Alzheimer’s, which as A.J. said in his email “hits genealogy particularly hard, since it erases family memories.”

Happily for me, there will be a branch party at the Southern California Genealogy Jamboree where I will be on that day.

His TED talk explains it better than any post I could write: http://globalfamilyreunion.com/ted-talk

This is what I read in the email:

With the help of dozens of scientists and volunteers, my family and I are putting together a world-wide event on June 6 that will unite cousins from all over the globe. You can watch a TED talk about it here. Or hear it on NPR here.

Our partners include the top firms in the field, including: FamilySearch, Geni, MyHeritage, Findmypast, 23andme, Family Tree DNA, and WikiTree.

So I quickly logged into GEDmatch, found him in my brother’s one-to-many then compared him to my maternal side family members and ran a shared segment and triangulation on him. He is M102029 if you want to see if you are DNA connected.

The results show that we share an 11cM Ashkenazi segment on chromosome 11, which we share with 20 others on GEDmatch in differing sizes, as well as with my double 3rd cousin in Israel. This is pretty small for an Ashkenazi connection (see my blog post on jewish DNA) so we are unlikely to find the common ancestor. But we can always fall back on the relationship found at GENI