‘s novels about the lives and hardships of Norwegian settlers in Minnesota in the mid 1800s. Her characters became very real to me as I read about how they dealt with love, the Indian Uprising, the Civil War, losing children, losing crops, and just getting on with their daily lives. How self-sufficient those settlers had to be! The advent of the sewing machine was major, since they made all their own clothes. She even tells parts of these stories from the Native American point of view.

After I finished the fourth one I was sad that there were no more. In order the books are: Abercrombie Trail: A Novel of the 1862 Uprising

A History of Scandinavian DNA

by Karin Bojs as much as I did. Karin, a journalist, learns about her ancient ancestors, after DNA testing, by going around Europe interviewing DNA researchers and archaeologists.

With the popularity of autosomal DNA tests, many people are not aware of how interesting it is to know about their deep ancestry via Y and mtDNA haplogroups. The Eupedia website has detailed information about the origins and history of each European haplogroup.

Only Family Tree DNA tests fully for these, although 23andMe will give you your top level haplogroups. If you tested at Ancestry DNA

, you can upload to Promethease.com – the health information site – to determine your basic haplogroup, see http://www.geneticgenealogist.net/2016/01/how-to-get-ydna-haplogroup-from.html for how.

Personally I like to keep a chart of my family haplogroups.

When genealogist Paul Hawthorne created the #mycolorfulancestry chart, I never made one because mine is so boring: top half Norway, bottom half Bavaria. However after reading the above book, it struck me that if I added haplogroups it would be a nice way to visualize them, so here it is. 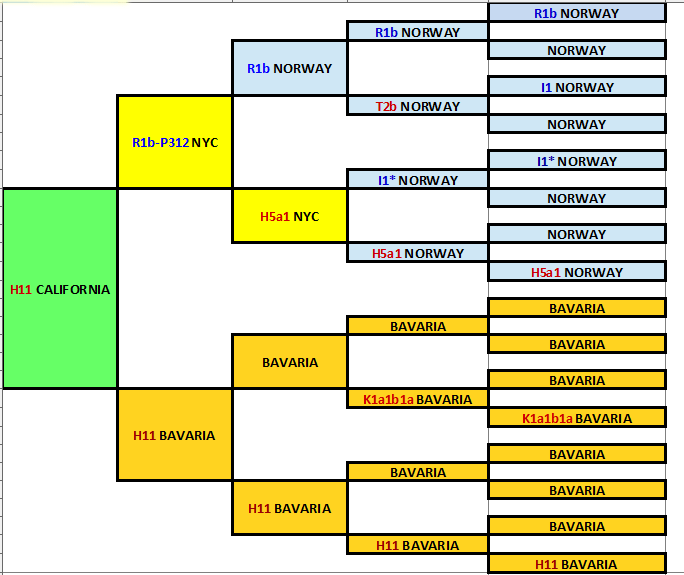 Historical novels have always been one of my favorite forms of fiction because I learn about the lives my ancestors lived while enjoying a good read at the same time. Sigrid Undset, a Norwegian Nobel laureate, wrote a wonderful three book series in this genre set in 14th century Norway. Her main character is named Kristin Lavransdatter.

I first read these as a teenager and shared them with my Norwegian American dad. He loved them also and went around calling me Lavransdatter all that summer! His name was Lawrence so Lavrans made sense to him as a Norwegian version. Of course I have since discovered that the family first name back in Norway was actually Lauritz so my name would actually have been Kitty Lauritsdotter. Names were repeated endlessly in Norwegian families because of the tradition of naming your first son for his father’s father, first daughter for mother’s mother, and so on.

It must be time to reread these wonderful novels: Kristin Lavransdatter, I: The Wreath

, and Kristin Lavransdatter III: The Cross