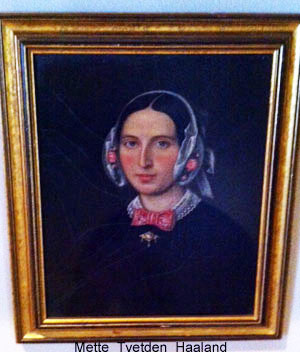 Although I regularly log in and sort my DNA Relatives, 100 per page, by “most recent first,” to see my new matches (Mondays and sometimes Thursdays for us) occasionally matches seem to change. So every once in a while I also sort by “contact status” and check all the “public matches” at the end of the list. To do that I click their name and see if I have already invited them to share in which case it says “Why can’t I invite this user to share genomes?” instead of  “Invite persons’s name to share genomes.” That is how I discovered my Holland relatives. No less than three of them were tested at 23andme.

I heard back from two right away. One was traveling so not sure, but the other, Janice, said, “This is very exciting! I think we are related through Sjur Haaland (Holland) and Mette Tvedten. In fact, I have their oil wedding portraits in my home!” Mette’s portrait is shown above; she is my gg-grandmother Marta’s half-sister so Janice is my 4th cousin. 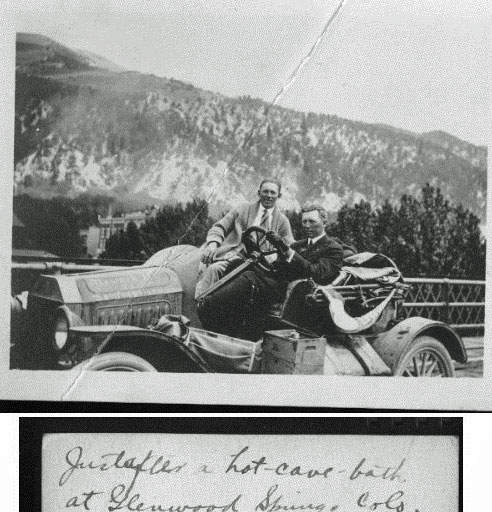 We quickly switched to email, talked on the phone, and Janice sent me many wonderful photos. I cropped and enhanced many of them and uploaded them all to GENI which already had her full family tree thanks to another more distant cousin (thank you John Terje). I think this one is my favorite. Her grandad (top fellow) took a road trip from Minnesota to California in 1915 – here is the stop at Glenwood Springs Colorado!

Now to plan a trip to meet her!

18 thoughts on “Our Holland (Håland or Haaland) cousins are found via DNA!”