A question I often get is “Can you tell if this DNA match is my uncle or my half-brother?”  Why this question? Because it is very difficult to tell the difference between a half sibling and a nibling (an aunt/uncle/niece/nephew) relationship from the amount of matching DNA. Like grandparents, they all share 25% with you, or about 1750 centimorgans (cMs) give or take several hundred. Unlike grandparents, the age difference can’t usually be used to tell them apart. The testing companies might call him “close family”, “first cousin,” “uncle,” or the more descriptive “1st Cousin, Half Siblings, Grandparent/ Grandchild, Aunt/ Niece” from Family Tree DNA, which by the way is my Dad’s actual great-niece’s designation. Then they show you the amount of shared DNA in centimorgans and maybe a percentage, but really they are just making an educated guess about the relationship. 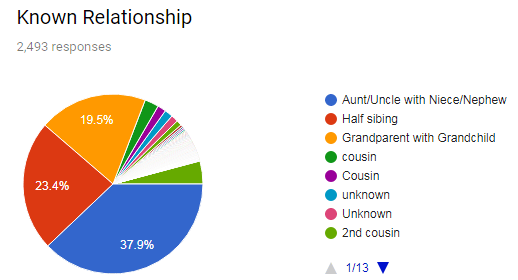 I wanted to find a way to help adoptees figure out more accurately which relationship a new 25% match was likely to be, so I collected detailed statistics using a google form for about a year, getting some 2400 responses. These were self-reported from people who read my blog or are members of groups on Facebook where I publicized this. I am still collecting, so feel free to add yours to my form (click here) to get included in the next report. GEDmatch numbers preferred.

My experience from helping people understand their DNA results had led me to suspect that segment sizes were the key to telling these relationships apart. I had noticed that the sizes of the four largest segments would usually be much much larger for half siblings than niblings. However now that I have these crowd-sourced numbers, I can see that much of my personal experience came from helping with paternal side cases. There the segments are consistently much larger.

Can you tell a nibling from a half sib by the shared number of segments and centimorgans?

The collected wisdom of the many adoption search angels is that the number of segments can indicate the difference. While this usually works for nibling versus grandparent, half siblings too often seem to fall in the range of one or the other.

The DNA adoption folk have a chart which shows the number of segments expected for each relationship (click here for that PDF) which is very useful, just not enough for determining half siblings. They carefully separate the AncestryDNA

results which can have more segments and fewer total centimorgans due to the removal of some matching data deemed less significant. DNA adoption also has an automated relationship estimater based on that data.

Leah Larkin recently wrote a fascinating post – Escape from the Overlap Zone – which showed simulations for these relationships which indicate that grandparents can easily be told from niblings since they have far fewer total segments. However again, the simulations show that half sibs and niblings have considerable overlap.

So how does the collected data compare? 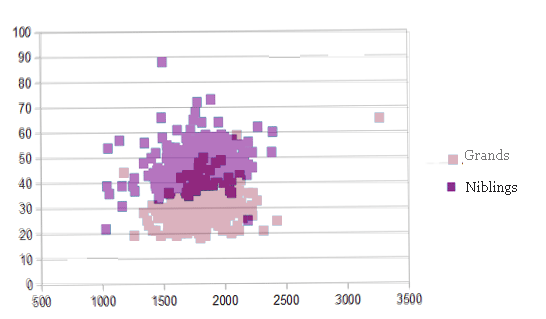 Here is a scatter diagram graphing total centimorgans (X axis) versus number of segments (Y axis) for just grandparent and nibling relationships. This used only the GEDmatch data for consistency. The niblings are the lavender color and the dark results show where they overlap with the beige-pink colored grandparents. This is not far different from the predictions although there is more overlap than expected but look what happens when I add the half-sibling data below right. 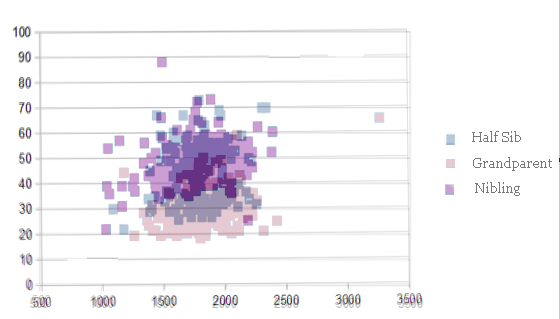 The graph is hard to read now since those results overlap both categories. The colors are semi-transparent so the darker areas are created by having multiple colors in that area. There seems to be considerably more overlap than the simulations predicted.

It looks like just using just shared centimorgans and number of segments will not produce a clear answer as to whether a 25% relationship is a half sibling.

Notice the funny shape of the half sibling blues. There is a bunch on top with the niblings and another group with the grandparents. Fortunately someone had suggested that I include a question asking which side a relationship is on, paternal or maternal.
END_OF_DOCUMENT_TOKEN_TO_BE_REPLACED