2020 has been a horrible year so far, in more ways than I can count. However, one good thing is that more of us are staying at home working on our family history and using DNA tools to help with that. Here is my summary of the latest genetic genealogy news for you, both the good and the bad. First the good…

MyHeritage did a new run of their Theory of Family Relativity so go look if you have any new connections with theories. Unlike Ancestry which seems to run theirs almost every night, MyHeritage only runs it every few months but it is more detailed. Click here for my blog post about this feature.

Family Tree DNA updated their ancestry composition estimates to version 3 which includes 66 new reference populations. Click here for the blog post Roberta Estes wrote about it. I will write a post soon that compares results at all the companies for my brother like I did six years ago (click here). For my extended family, version 3 is not an improvement, although I like the new Magyar population predicted for us which fits into my 25% Bavarian ancestry.

My new ethnicities at family Tree DNA. My father was Norwegian and my mother German (half Jewish). No British.

According to a FaceBook post in the GEDmatch user group, Verogen announced a number of GEDmatch improvements coming in Q4 at the ISHI (International Symposium on Human Identification) conference including enhanced security for GEDmatch and a modernized User interface.

Ancestry also moved that wonderful new Longest segment feature (click for my blog post about it) and at first I could not find it. An appeal to the hive mind at FaceBook resolved my problem. As shown in the image below, you have to click the amount of shared DNA in blue to see that and another new feature, the “Unweighted shared DNA.“ That is the amount of matching DNA before their algorithm removes the DNA assumed to just be from your particular population group. That algorithm has vastly improved my Jewish side matches, as it would for anyone with endogamy in their tree. 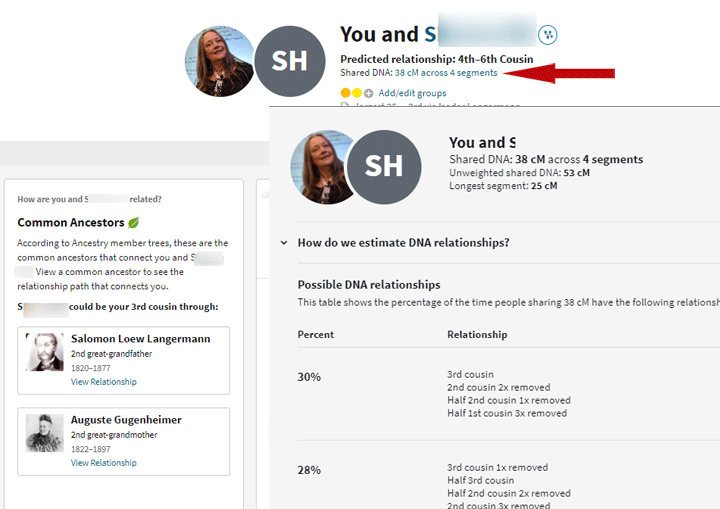 Now for the bad news.
END_OF_DOCUMENT_TOKEN_TO_BE_REPLACED