My favorite yearly conference is the two days of talks that i4GG puts together for us serious genetic genealogists. Thank you CeCe and Lennart for doing this and for making the very professional videos, which are free to conference attendees and available for purchase by everyone else.

One of the highlights of the conference was hearing from Paul Fronczak and his daughter. Paul was the child returned to his parents after the famous Chicago baby-napping case in 1964. In 2012 a DNA test showed that he was not their child. His book The Foundling

, about his search for his roots, his missing twin sister, and the real Paul Fronczak, is a terrific read. (click here for the BBC summary of the case)

I have just started using a great tool called Scapple, that I learned about from Michelle Trostler‘s talk. So far I love it! It is an inexpensive mind mapping package that makes it super easy to quickly put together possible family charts for clients. It is always pleasurable to hear about actual cases and how they were solved. Both Michelle and Carol Rolnick obliged. 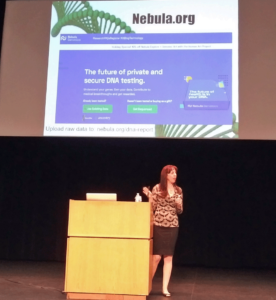 Chaos ensued when Katherine Borges, the director of ISOGG (whose Wiki is my go to resource), told us about the FamilySearch app with “Relatives Around Me” on its menu towards the end of her epigenetics talk. Everyone was downloading it to their smartphones and running around finding their cousins. I discovered many 12th cousins, including Tim Janzen, from a dubious connection that needs more research, a Thomas Gray who went to Norway and became Graa. Sadly I never did find my real 8th cousin Dixie Hansen in the room!

I presented on What’s New at GEDmatch and also about Automated Tree Building Tools, focusing on DNA2tree, as Dana Leeds was covering Genetic Affairs (GA) which she did quite well. I do have a blog post on GA in progress, it now includes GEDCOMs with the tree building! As always my slides can be found at https://slides.com/kittycooper

The biggest take away from the conference for me was that we all need to be more diligent in getting our relatives to opt in to law enforcement (LE) usage on GEDmatch. Many of the cases that have been solved with genetic genealogy could not be done today now that the usable database for LE investigations is down to about 200K from over a million before the opt in requirement.

Also perhaps we need a team to identify kits of people who are deceased. GEDmatch will opt them in if presented with an obituary.

I am also putting together a new email message to send to reluctant cousins appealing to their desire to be good citizens.

I am including this link to a news story about the many victims and criminals that genetic genealogy has identified
https://www.foxnews.com/us/dna-genetic-genealogy-helping-to-solve-the-coldest-of-cold-cases as well as Roberta Estes’ post on downloading and uploading DNA test results: https://dna-explained.com/2019/11/04/dna-file-upload-download-and-transfer-instructions-to-and-from-dna-testing-companies/

If you and your cousins either upload a GEDcom of your family tree (click here for my post on that) or add your GEDmatch id to your Wikitree profile so it gets linked to from the one-to-many, the genetic genealogists doing crime searches may never need to contact you all to pinpoint the distant cousin who is the probable criminal.

CeCe described the details of the Angie Dodd case. Thanks to the persistence of Angie’s mother, Cece tried using degraded DNA which only generated a partial kit for GEDmatch. It turned out to be very usable. This is the case where Y was initially used and pointed to an innocent film maker. He did turn out to be the 7th cousin of the suspected killer on that Y line, but the name was spelled differently and the suspect had taken his step father’s surname anyway (click here to read more about that).

DNA items worn by me, socks, and Tim Janzen, tie – photo thanks to Beth Mader

Barbara Rae-Venter talked about the follow up to the Lisa case: the case where the search for the identity of a little girl abandoned by her supposed dad uncovered multiple murders. The identities of the women in barrels in NH have now been uncovered with the help of genetic genealogy. When Barbara first talked about this case at i4GG in 2016 it gave me nightmares! She also discussed other cases she and her team had solved, but not the Golden State killer case which we had heard about from her in the past.

As usual I told Tim Janzen to improve his slides. I always learn from listening to him, but it is sometimes hard work as the slides are too wordy in my opinion. I like to see more pictures and pretty charts. At least he wore a DNA themed tie!

All the talks were very worthwhile and the videos can be purchased in advance from i4GG at this link: http://i4gg.org/conference-videos/