Rootstech is over and I am exhausted. This year I was up early enough to go to the keynote sessions almost every morning. Wow! In a huge hall we saw great multimedia presentations over many screens while listening to a star speaker. I particularly loved Paula Madison and her Finding Samuel Lowe: China, Jamaica, Harlem

; so of course I bought the kindle version of the book. [update: the pictures are better in the physical versions but it is still a great read]

Perhaps it is because of my work with adoptees and DNA that I so appreciated her story, but more likely it was just that she was terrific and the tale was so well told. I also got to see the short form of her documentary at the media dinner, definitely worth seeing.

My other favorite keynote speaker was David Isay and his StoryCorps. His concept is to get two people in a booth, facilitate their conversation, and record the result for posterity. I think the story I liked best was the one where the boy with Asperger’s interviews his mother – Sarah and Joshua. But every snippet he played for us brought tears to my eyes, the wild grandad, my son the veteran, and the boy who became close to the mother of the boy from the rival gang that he had killed.

And of course it was great to see A.J.Jacobs again and hear a report on the Global Family Reunion.

Usually my favorite things at Rootstech are the exhibit hall, networking with fellow genetic genealogists, and learning a few new things. This year I have to add to that the sensational MyHeritage after party (click here for the slideshow over at Geneabloggers) and the Keynote sessions. [Addendum: The keynotes and other recorded sessions are available at the Rootstech video archive]

Since DNA is my passion I went to most of those talks, mainly to get ideas on how to better present DNA talks myself. I actually learned a few things. Rising star Paul Woodbury of Legacy Tree Genealogists gave me some good ideas about a testing plan, Tim Janzen showed how to use quantitative analysis of cMs to prove genealogical lines, and the panel discussion moderated by Extreme Genes’ podcaster Scott Fisher on the future of DNA was great. I only wish it had gone on longer. Then there was the inspirational talk about DNA.land – a non-profit lab which was one of the leads on the recent break through in schizophrenia genetics. They want your DNA for research; check out my blog post about them, another one coming soon. 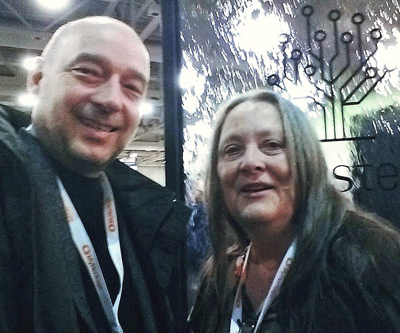 Michael and me in his selfie

After my own talk on DNA triangulation, I had a delightful surprise, my Austrian DNA cousin from Vienna, Michael, came up to me to say hello. He shares about 13cM with me, my maternal aunts and a first cousin; ancestor as yet to be determined. He was there for the innovator summit in which he had entered his product GenSoup – a genealogy site still in beta – and had gotten to the semi-finals. He describes it as  follows: “GenSoup is a new online-Platform for genealogy, which focuses on Central and Eastern Europe. It is in very early beta right now and still misses several key functions.”

My New Year’s resolution this year was to research further on the Bavarian Catholic side of my family so I went to both German genealogy talks and enjoyed them greatly. Now to put those lessons to use. I ran into the great German genealogist Warren Bittner at the Family History Library and found out that the Passau parish, where my ancestors are from, is the only Catholic parish to have put their records online, lucky me!

Here are a few other blog posts about Rootstech

Addendum: I also chatted with Finn Karlsen at the Family History Library and he told me that the online Norwegian archives now take an wildcard in the middle of a name. See my post on his talk from two years ago at Rootstech for more about those archives.

Disclaimer: My brother is Shipley Munson, the familysearch guy who puts Rootstech together.

2 thoughts on “Rootstech Wrap Up”